What Links Sex, Architecture, and Design? 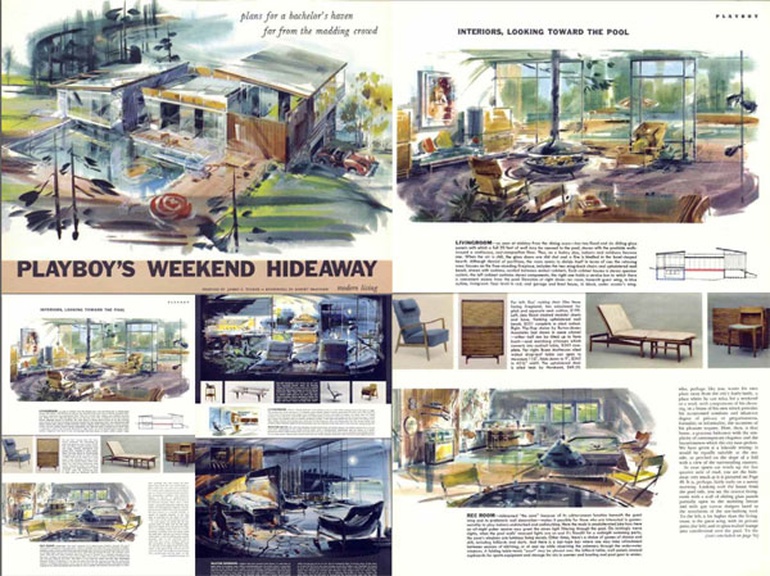 This article was first published in 2012.

Sex, architecture, and design have a lot to do with each other. And nowhere have they been such good bedfellows as on the pages of Playboy magazine. Beatriz Colomina, a professor at the Princeton University School of Architecture and founder of their Media and Modernity program, studied the connection. In 2012, Colomina worked closely with curators at the NAiM/Bureau-Europa in Maastricht, The Netherlands, to organize the exhibition "Playboy Architecture, 1953-1979."

The exhibition, complete with a timeline configured by Colomina, showed how cities, buildings, interiors, furniture, and products have always had an important presence within the iconic men's magazine, where articles, interviews, and erotica are given (somewhat) equal weight. Ever since Hugh Hefner launched Playboy in 1952, its glossy spreads have featured the likes of Frank Lloyd Wright, Mies van der Rohe, Buckminster Fuller, Moshe Safdie, and Paolo Soleri—right alongside airbrushed photographs of sensual women.

Colomina argued that the interior architecture it showcases has helped to shape American ideas about gender identity and aesthetics. The impact began with the escape from suburban family life in the 1950's in preparation for the sexual revolution and idealized bachelorhood of the 1960's. As architectural historian Sigfried Giedion described it, 60's architecture was "rushing from one sensation to another and rapidly bored."

Hefner's famous mansions played a key role in the exhibition, along with an installation of an abstracted bachelor pad that screens clips from various movies, including scenes from the Bond movie "Diamonds Are Forever." Original photographs, films, architectural renderings, interviews with architects and editors, and design objects together illustrate how Playboy Enterprises introduced modern architecture to the masses. This was in part through its own chain of clubs, resorts, movies, and television shows through the 1970's.