Photo by Larry Lederman/Departures. Kitty Hawks isn't one to fuss. "My work isn't premeditated," the designer says. "It's very spontaneous." And that spontaneity reveals an innate ability to combine textures, colors, and objects. She thinks nothing of setting a Hindu deity on a 1940's credenza beneath a Flemish 19th-century textile or of placing arts and crafts chairs against the tooled leather of a Spanish 19th-century screen.


In matters of taste, Hawks had an early start-as the only child of style icon Slim Keith and film director Howard Hawks. "I grew up around beauty because of my mother," she says, recalling the family's houses in England and Manhasset, New York. An epiphany struck during a teenage visit to Blenheim Palace, where she was surprised to find coziness amid the Duke of Marlborough's 18th-century grandeur. "If it was possible to create comfort in that kind of setting, there'd be no excuse not to do it everywhere," she remembers deciding.


It would be some time, however, before she applied her talents professionally. A graduate of Smith College, she did stints as a script reader and literary agent. After studying at the school of architecture and urban planning at the University of California in Los Angeles, she switched to fashion and furniture, serving as creative director for Perry Ellis and Stendig.


During her nine years on the West Coast, she made frequent trips to the Los Angeles County Museum of Art, where her love affair with Japan flourished. "The Japanese combine order with sensuality," she says. "It's the culture I always come back to." Though she mines Western sources as well, her esteem for Japan comes through in Noh masks, lacquered screens, kimono prints, and calligraphy.


Her first commission, in 1988, was an apartment in New York's Hotel des Artistes. By now, she's worked for Tom Brokaw, Agnes Gund, Michael Ovitz, and Mike Nichols and Diane Sawyer-as well as other clients who can appreciate yin-yang pairings that verge on cheeky. Hawks treats a room like a collage.


For a house in Natchez, Mississippi, she framed a single doorway with such diverse ' pieces as a French 19th-century painted chair, a Chinese ceramic pedestal, an Agra rug, and a Sol LeWitt lithograph. In her own New York living room, a Noh mask rests on a George Nakashima cocktail table, right next to a 1940's slipper chair that's a favorite with her dog, Major Deegan. At her house in Chappaqua, New York, she once contrasted a window seat upholstered in a blue-and-white floral with the cardboard squiggle of Frank Gehry's Easy Edges chair.


Her interests, however, extend far beyond the private sphere. An energetic advocate for improving New York's built environment and public spaces, she's worked on issues ranging from sustainability to the redesign of the yellow cab and the redevelopment of the West Side rail yards. "Kitty's energy and love of fun are immediately apparent, but you realize after a while that she's also an incredible diplomat. We should send her to figure out the Middle East," says Municipal Art Society president Kent Barwick.


Hawks serves as a trustee both of that organization and of the Design Trust for Public Space. As chair of the Design Trust's annual auction, she has helped raise more than $100,000 three years running. "Kitty understands not only the importance of design but also that of bringing together the right people to make it happen. She has been tireless in supporting us with her knowledge, open-mindedness, and humor," says Design Trust executive director Deborah Marton.


"There's too much we do as a city that hasn't been carefully thought through," Hawks says, then brings up the example of the fare-card dispensers used for New York mass transit. "I really wish we'd put MetroCard machines aboveground. When I wanted to catch a bus the other day, I had to schlep all the way down into the subway to get another card." For all her haute style, she still has the common touch. 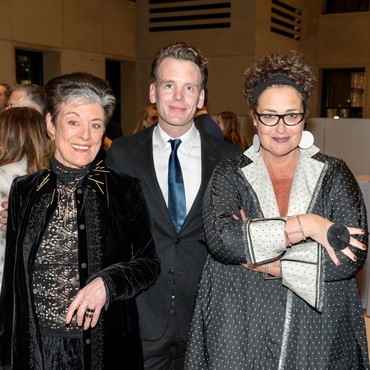