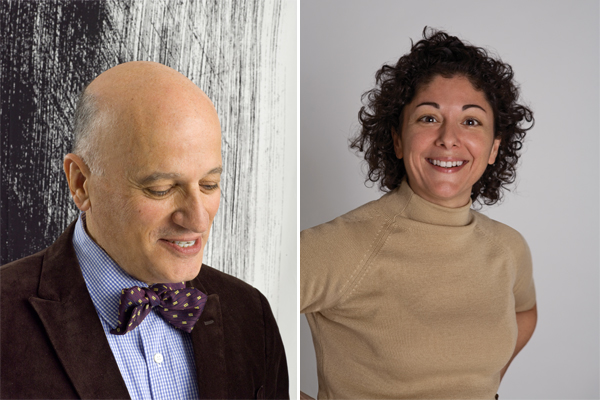 "We don't really make a distinction between residential and commercial work," Carl D'Aquino says. "We're always looking for what's personal about any project." And that holds true whether he and Francine Monaco are designing a grand yet cozy country house, an urbane pied-à-terre, or a corporate office. "For a commercial job, we might find it in the disposition of the CEO," D'Aquino adds. "But we always find something personal."


Case in point: La Prairie, a Swiss beauty company eager to escape its traditional, wood-paneled New York office. Discussions with president Lynne Florio resulted in an earful about the proprietary technologies used to make the creams and cleansers as well as the fierce loyalty the brand enjoys. "So we based our design on the packaging," D'Aquino explains. Walls come in white lacquer and cobalt blue polished plaster; acid-etched mirror clads columns. Although D'Aquino Monaco aficionados might find the relatively spare aesthetic somewhat atypical of these designers' reputation for boldness and opulence, a conference room's silver-leafed wall treatment indisputably bears their sumptuous signature.


Silver leaf, in fact, is what both designers chose when asked which material would work in any possible scheme. "We've used it in the greatest variety of ways," Monaco says. "On furniture, as a pattern on walls and doors and ceilings. . . ." She trails off, realizing how odd this answer might sound. But it's not actually all that strange when one considers how much these two love materials.


D'Aquino Monaco has tried everything. Curtains might be parachute cloth or paper. Wet-suit fabric serves as the backdrop for marble samples at a showroom. Apparently, D'Aquino is keen to figure out a use for an industrial acoustical material that resembles a frozen slab of thickspaghetti. "Every time we're stumped, Carl trots out this stuff," Monaco says, laughing.

Her teasing is evidence of the easy, organic way their New York firm has evolved. Over 10 years ago, Monaco, a registered architect, was leaving the planning department of the Solomon R. Guggenheim Museum and hoping to start her own practice. D'Aquino, who'd trained as an architect but opted for interiors early in his career, was looking for someone to sublet extra space in his studio. The deal was made through an intermediary, and the two didn't meet formally for quite some time-they kept completely different schedules. Eventually, a casual camaraderie developed, but neither designer contemplated a partnership. "We had a long courtship," D'Aquino says. "We spent a lot of time consulting with each other, and the way we communicated was very complementary." Monaco chimes in, "Finally, a project came to Carl that seemed like the perfect opportunity for us to work together."


The two-bedroom apartment was in the tower above the Museum of Modern Art, and the renovation took its cue from Piet Mondrian. "This kind of attitude started, with the idea of grids and moving planes," D'Aquino says. One element of the project was a sliding wall patterned with aluminum and plaster, a decorative idea born from architectural materials. The pair are still patterning walls-but now a town house's stairwell might get 27 different patterns of wallpaper.


Monaco, ever the architect, looks first at a plan, whereas D'Aquino thinks about the experience being lived in a space. Together, they've learned how materials introduced at the point of entry can be used to draw one through. "We never treat rooms as individual. There's always something to entice you, a thread, something that leaves a trail," D'Aquino says. Monaco continues, "The design gets even richer once you know the basics and can then pick up on details."


For D'Aquino Monaco, the whole is always greater than the sum of its parts.


D’Aquino Monaco just competed its first hotel installation of 365 new guest rooms and suites in The Ritz-Carlton Grand Cayman Resort.  Serene new guest rooms and suites were designed in a fresh refined aesthetic, contemporary in concept, inspired by Grand Cayman’s natural environment and its British Colonial history, drawing from different sophisticated vocabularies that can live together. Carl D’Aquino and Francine Monaco of D’Aquino Monaco’s prior involvement with the property includes the award winning interiors of the La Prairie Silver Rain Spa ,  that received international media coverage for its innovative design.