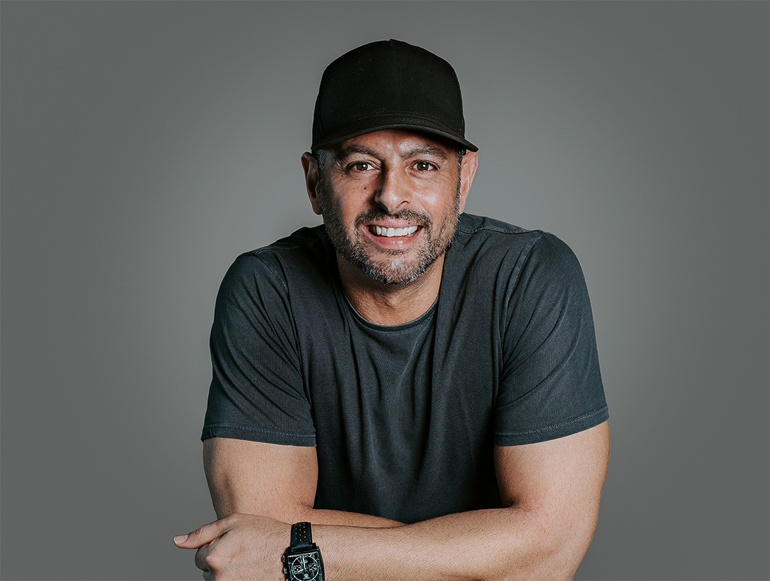 “Storytelling is probably one of the most underrated elements—yet for me, design is an empty shell without it,” says Australian interior designer Marcos Cain.  A self-taught creative, Cain entered the workforce as an apprentice hair stylist at the tender age of 12. He then embraced all aspects of the hospitality market, honing his creative eye at restaurants, bars, and hotels across Australia as well as in Asia and the Middle East. By 30, he had his own bar and restaurant. In early 2000, he then went on to design and develop successful Perth
bar Tiger Lil's.

A self-taught creative, Cain entered the hospitality industry at the tender age of 12, and went on to hone his skills at restaurants, bars, and hotels across Australia as well as in Asia and the Middle East. In 2009, he founded Shanghai and Dubai-based studio Stickman Tribe. Today, the firm’s client list brims with high-profile hotel groups—Hilton Worldwide Holdings, Marriott International, and The Ritz-Carlton Hotel Company among them.

In March, while under a two-week quarantine and confined to a room at a hotel in Melbourne, Cain filled in Interior Design on his latest project: four dining destinations (of 10 total) as well the spa at the Waldorf Astoria Maldives Ithaafushi, also designed by the brand’s in-house design team and Highness Engineering Consultants. On July 15, the Maldives reopened to international travelers—and this latest Waldorf Astoria destination is once again looking to entice with new social-distancing criteria.

Situated on a 2.2 mile stretch of three islands, the Waldorf Astoria Maldives Ithaafushi offers 119 villas, each with its own pool framed by sweeping views of what the island nation is famed for: the azure waters of the Indian ocean. The luxury resort also offers what must be one of the globe’s most epic party locations—a private island sleeping 24 (spanning 344,000-square-feet, it can be booked for around $80,000 a night).

Here, Cain fills us in on the Waldorf’s treehouse and cave dining concepts, baking LEDs in the oven, and fresh hotel design ideas born from quarantine.

Interior Design: What was your brief and overall design goal for the Waldorf Astoria Maldives Ithaafushi?

Marcos Cain: In order to cater with variety to guests staying five to 10 days or longer, the client asked us for four signature food and beverage venues as well as a spa—all with standout details allowing a different ambience and food style.

As the highest point on the island, Terra, the treehouse dining concept, is a real win for us. It’s a small restaurant that caters to just 14 people. The treehouse is not literal, but a series of bamboo and concrete platforms or cocoons nestled around a vast canopy of bamboo foliage—making for a unique dining experience. Terra is also interesting as it stands right in front of the island’s back-of-house, with its highest point concealing all those services.

Underneath Terra is The Rock, where we put a 200-year-old, 13-foot-long Jarrah wood table for people to have wine tastings. Enshrined in the cave built around it is actually our second piece of that solid timber – the first was destroyed in transit, after the shipping container caught on fire.

Restaurant Glow, an organic hut-like venue which relates to and supports the spa, has more of a quirky farmhouse concept.

One of my personal favorite design elements is found in restaurant Li Long, an amazing sort of Shanghainese nobleman’s home that we flat-packed, and delivered to the island. There we gave a traditional Ming vase a contemporary reinterpretation as a bespoke feature bell.  Made of infused porcelain and timber, it rises nearly seven feet high.

ID: How you think this project meets current demands in the hospitality market?

MC: As hospitality specialists, longevity is a key focal point for us. When creating these designs, we ensured that the concepts would not only stand the test of time but actually evolve with the surroundings and improve the guest experience.

Take Terra—choosing bamboo as the surrounding foliage is intentional as it is one of the fastest growing plants. With time, a bamboo forest will camouflage the structure of the nests, only leaving the intentional keyhole views each pod has onto the horizon.

MC: A refresh of The Westin Dubai Mina Seyahi Beach Resort & Marina in Dubai, including lobby, public areas, guestrooms, and all-day dining restaurant. It struck us that the architecture and context of the building resembled a mansion—so this was the starting point of the design concept. From there, we addressed every interior element as though it was part of this fictional, wealthy character’s home. The reception became the foyer, the lobby-lounge with its central atrium rising 10 floors became the conservatory, and the tea lounge became the library and games room. The concept lent itself especially well to guestrooms, where we created an East and West wing of the mansion, and treated the rooms as actual characters, Penelope and George. The Penelope rooms feature killer curves, daring patterns, a quirky overall palette, and a unique headboard; whereas George is strong and manly, and exudes effortless luxury by embodying classical details in a contemporary form, whether it’s the modern take on a wing-back chair or the folded collar-like headboard.

MC: The Hilton Canopy Seychelles. This is the first resort location for Canopy by Hilton so we’re collectively working as a team with the client, operator, and consultants to seamlessly translate the quirky urban brand into a resort setting. The brand is quite fun and fresh which lends itself nicely to the environment of The Seychelles.

Also brewing is Pirate Life Perth, a project particularly close to my heart as the venue is in my hometown. The best way to describe the design is a decommissioned props warehouse that has been brought to life while some of the props remain. From tattooed leather chairs to a flying wild boar strapped with bombardier goggles and a WW2 bomb, there are a team of talented misfits aiming to kick things up another notch, so stay tuned!

ID: How do you see the hospitality market changing over the next decade or so?

MC: With the COVID crisis, changes to hospitality will be more tactile than ever. The concept of ‘fit for purpose’ will change the landscape for designated hotels across the globe. Flexibility will be key, whether it’s transforming hotels into hospitals, quarantine housing, or centers for essential workers and the homeless. The staggering majority affected by the pandemic are the elderly—and hotels and resorts could become safe havens to isolate them.

In March, I was personally put under a 14-day mandatory quarantine at a hotel in Melbourne. There I learned some interesting ways to think beyond the standard hotel accommodation sphere. Some points to consider when designing fit-for-purpose with flexibility could be: an adjustable height workstation allowing sitting or standing and a multi-use concealed headboard or canopy.

I’d also like to see an attachable Pilates reformer in a slide-out bed base, or a calisthenics or chin-up bar also used for self-watering hanging plants or succulents, or a TRX anchor fixing point. And what about a yoga mat, an integrated triage unit for the head board, or resistant bands for the door? In this case, I was lucky as I always travel with resistance bands!

Also, bedside tables should not be fixed and lockable castors should be fitted to all furniture.

MC: I live between two homes with my wife and two children, who recently moved back to Australia. The first is a three-bedroom apartment on The Palm Jumeirah, an artificial island in Dubai, and the second is a Spanish colonial beach house in Perth. Last year in Perth, we were all living in the garage while completely renovating 30-year-old laundry and kitchen areas into a contemporary functional space. We converted unused dining area into a study and a playroom into a functional gym. We have a MODO smoked glass chandelier by Jason Miller, a Ploum sofa by Ronan and Erwan Bouroullec, and a QT Chillax chair designed by Nic Graham.

ID: How do you think your childhood or formative years influenced your design-thinking?

MC: I’m sort of self-taught with everything and as a result have had a really different history. Essentially, art has gone through my narrative and influences are based on life experience and, multi-disciplines upon entering the workforce. At the age of 12, I was already working and living through what I believe to be some substantial milestones in music, culture, and technology. My background encompasses stage and lighting design, set design, AV, art direction, and poster art. In the early 1990s, I was making LEDs by baking them in the oven! From being a stylist for cable channels to promoter, art director, working with performing arts education and dance collectives developing short stage show events performances, I worked in varied disciplines as an entrepreneur by the age of 20. After moving to Sydney, I managed multiple venues while working with Charles Boutagy, owner of The Cauldron nightclub which was ranked as one of the top clubs in the world in the late 1980s and early 1990s. I've got a colorful past I could say.

ID: Who in the industry do you particularly admire?

MC: Ian Schrager. This self-taught risk-taker who thinks and acts with emotion and designs with passion and gut has revolutionized the way we lead our lives—how we dance and party, how we holiday, how we work, and even how we see the world.

MC: “Utopia for Realists: And How We Can Get There” by Rutger Bregman. Humanity is the economy.

MC: In Italy, a secret I'd like to keep is the Capri Tiberio Palace. It is built into exposed rock face with a palm tree that punches through
> from the ground floor bar to the rooftop pool.