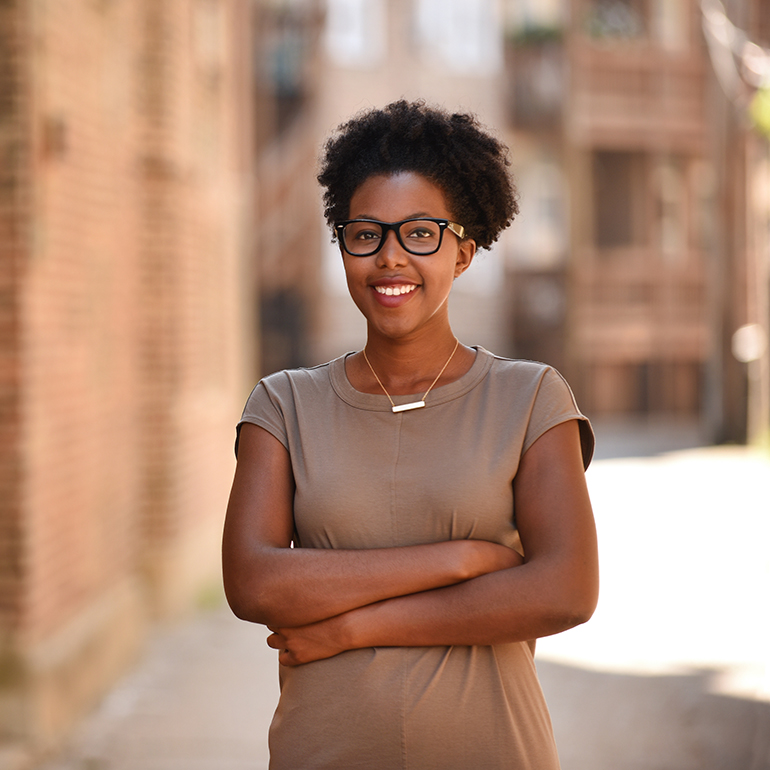 For Maya Bird-Murphy, a career in architecture and design was a foregone conclusion. She grew up in Oak Park, where her parents and younger brother still live and where she was surrounded by Frank Lloyd Wright buildings, often the subject of family conversations. You might say they were infused in her DNA.

Also part of her DNA is laser-focused drive and creativity. The traits came to the fore during high school when she attended a sleep-away architecture camp. Then she went on to earn a Bachelor of Science degree in architecture from Ball State University (graduating a semester early) followed by a M. Arch. from Boston Architectural College. This was mostly online, so she could simultaneously work full-time, mostly at Valerio Dewalt Train, among other firms.

While working and completing her thesis, she began the research and development for Chicago Mobile Makers, incorporating it in 2017. She was just 25 years old. Two-and-a-half years later, she now devotes most of her time to this phenomenal advocacy and youth-focused traveling design lab, whose stated objectives are three-fold: Engage and empower youth through making and skill-building; train and support future public-interest architects, designers, and makers; advocate for social, economic, gender, and racial diversity. Bird-Murphy still works part time at HPZS. Down time is sparse, but she finds it for her two Australian Shepherds.

Interior Design: What was the catalyst sparking you to switch from working for others to founding Chicago Mobile Makers?

Maya Bird-Murphy: I’ve had bad experiences working for others and I finally realized I would feel safer, be in control of my schedule, and generally thrive working for myself. Architecture has a very regimented path, so it was really challenging to veer off that path. I just had to figure it out on my own.

ID: Your vision for Chicago Mobile Makers is extraordinary, but the venture is grounded in practicality, a repurposed USPS van. How did you obtain and transform it? What goes on inside?

MBM: We bought the truck from a dealership in May 2019. It took a year to fundraise and build out the inside with a local metal worker, millworker, and electrician. Now, it has storage for power tools, hand tools, drawing and modeling materials, laptops, and larger machinery like a laser cutter and 3D printer. The interior features birch plywood custom cabinetry, a custom pegboard and message board, magnetic whiteboard, soft seating, a desk, and large windows. A boosted electrical system, including solar roof panels, can power any tool. The design allows students to spill outside and activate unused space. Youth will be able to design and build change in their own neighborhoods with their own hands.

ID: Give us an example of a project.

MBM: Our main workshop is called Community Makers. Last spring, we did a program at Schurz High School, which is near a controversial intersection that used to be popular and thriving. Now, many of the storefronts are vacant, and there’s a gaping hole on one corner on one corner where a building was demolished and not replaced. Students engaged in the design process: mapping and analysis, identifying community assets, and then designing and proposing a community intervention for the site.

ID: How does this work? Do you propose projects to schools and entities, or do they come to you?

MBM: We’ve been lucky. Most of the time teachers or organizations come to us and ask us to do programming.

ID: You’re a non-profit organization. How do you get funding?

MBM: Funding comes from individual donors, grants, corporate sponsorships, and program fees. We rarely charge the student or family to pay for workshops. The school or organization pays.

ID: Aside from the skill sets CMM teaches, it delves into effecting cultural change. What do you hope to see?

MBM: We create programming that is relevant to young people of color. We want them to be able to use skills they learned in our programs in whatever aspect of life they choose. We believe that some of the youth we engage will become civically minded and progressive policy makers, urban planners, makers, architects, and community change makers.

ID: When we met during Novita’s Diversity in Design panels, you were incredibly open and shared that you had felt uncomfortable in workplace situations, especially when you were the only Black person in the room. Can you offer advice to help ameliorate these circumstances?

MBM: The only solution is to diversify offices. That should be made a priority.

ID: What’s up next for Chicago Mobile Makers?

MBM: We’re going to start doing some virtual workshops this fall and hopefully start design-build programs in the spring. Also coming this spring is a workshop series with Perkins+Will called Formwork Youth Studio. It will be a four-week exploration of design, architecture, engineering, and construction.

ID: What are some of your favorite Chicago spots?

MBM: Magic Hedge, kind of a secret place, is by far my favorite. It has one of the best views of the skyline and is extra beautiful in August when the field of flowers are in bloom. The North Branch Trail has a string of parks along it, and you can get to a beautiful bike path. Promontory Point has another good view of the skyline on the South Side of Chicago. It has large stone bonfire pits and being there at sunset is spectacular. In the Hyde Park neighborhood, 53 Street has cute shops and restaurants. It’s a diverse area and fun place to hang out.

ID: If you hadn’t been an architect, you’d have been?

MBM: I honestly can’t imagine being anything else. I’m grateful that I figured it out so early in my life.