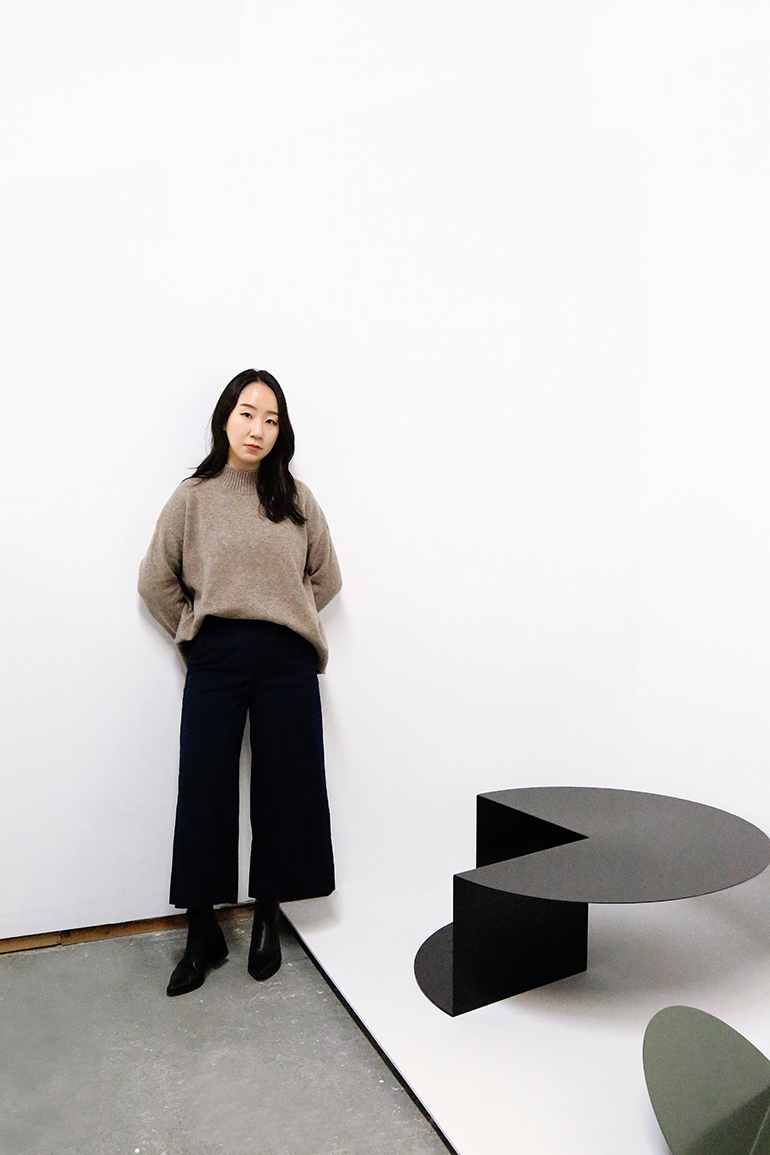 Nina Cho describes her work as having a “reductive aesthetic.” It took a lot of work to develop the skills to use so little: Born in San Francisco and raised in Seoul, Cho studied woodworking and furniture design at Hongik University before earning an MFA in 3D Design at Michigan’s legendary Cranbrook Academy of Art. Since then, her furniture has embraced the void—whether literal, like those created by her cantilevering tables, or implied negative spaces created by changing tonalities of glass in her mirrors.

This year, WantedDesign celebrated her achievements with its American Design Honor. “We love her integration of a very subtle color palette, and the ‘graphic’ approach she takes to her structural pieces,” say WantedDesign co-founders Odile Hainaut and Claire Pijoulat. “She overall imposes a strong design voice in a very delicate and pure way, mixing curiosity and poetry, storytelling and precision.” When the fair returns to the Javits Center in New York in May of 2021, she’ll demonstrate how right the platform was to recognize her work. Meanwhile, Cho tells us how she developed her style, how she’s coping during the pandemic, and what’s coming next.

Interior Design: What was the first piece of design you remember noticing?

Nina Cho: A Playmobil dollhouse. When I was a child, my father brought me this toy as a gift on the way back from his business trip in Europe. It was the Victorian Playmobil Mansion 5321 Bedroom. I remember that toy in particular because I had never seen anything like it before. I wasn’t so interested in the figures; the details in the miniature objects were what really drew me into it. I was able to experience a new type of interior space that was far different from any style of furnishing in my family’s South Korean apartment.

ID: You studied at Hongik and then the legendary Cranbrook; were they similar or different in fruitful ways?

NC: Both the Hongik and Cranbrook programs were different from conventional design programs and each pushed me in their own ways. As an undergraduate at Hongik University in Seoul, I studied woodworking and furniture design. It was an interdisciplinary study of both craft and design. I was encouraged to tell my own story and design unique furniture inspired by my identity. I had the chance to explore different kinds of materials, while also learning a strong foundation in woodworking. Through that I found an intrinsic value in furniture design. I practiced creating design as a way to talk about my thoughts. This practice led me to think profoundly about my intentions. Purposeful perfectionism became a running joke between my friends and myself. We would compete to see who had used the highest grit sandpaper or whose piece had the finest finish. There I learned to be meticulous about every single detail and craftsmanship became an obsession.

Cranbrook definitely helped me to focus on things important to growing my practice and moving my work forward. When I first arrived in the United States, it was really challenging for me to find where to buy source materials, including basic craft materials. I wasn’t familiar with the system here and I was dealing with a language barrier. That said, paper was easily found, so I started using paper to make small scale models. I became interested in the materiality of paper, and began thinking about what similar materials might bring the same characteristics to product scale. So, I started using sheet metal, which I barely used in my undergraduate studies. This initial challenge I had ended up broadening my use of materials.

ID: What was the first thing you designed where you looked at it and thought: I did exactly what I hoped to do?

NC: The Cantilever Table from the Reductive Form Study collection. I developed my ideas about creating a three dimensional form through bending planar materials. A thin gauge of sheet metal presents this idea well and supports the aesthetic of emptiness by describing positive and negative space. This sculptural form of the coffee table invites people to interact with the objects in an inventive and personal way. Users have freedom to explore the use of negative space created within an object.

ID: You’ve said you’re “inspired by the traditional Korean aesthetic of emptiness.” What does this concept of emptiness mean to you?

NC: I aspire to create a moderate aesthetic with the attitude that there is beauty in emptying of spaces, rather than adding/filling spaces. In painting, the unpainted portion of a canvas is as important as the painted portion, and it is needed to highlight the painted part. It is about respecting absence as much as the object. To me, the emptiness refers to a negative space that objects create. The void is a space for people to creatively complete the work.

ID: I’ve been thinking about your Spout vessels, particularly the soap version, for obvious reasons. What problem were you trying to solve?

NC: I’m interested in an intuitive approach for product design. For example, like Affordance in design, which means people intuitively understand how the product should be used. Soap dishes are something that you see around your daily life, but their design is not often contemplated. Most soap containers are designed with flat bottoms that trap dirty water, creating an unsanitary mess. These Spout vessels address the problem by letting you easily empty the excess water after each use. Runoff is naturally directed along the sloping surface and pours out the spout to keep it from pooling at the bottom. While providing a visual clue through the form, it’s a simple solution which has clean lines and elegant silhouettes with intuitive functionality.

ID: WantedDesign’s postponement obviously must have been a disappointment; how has it affected your plans?

NC: I was really looking forward to the show. I’ve had mentors say that making it to five years of your independent practice is essential and a landmark. This year was five years of moving forward as an independent designer since graduating from Cranbrook. I was sincerely honored to receive the award and expected this to be another turning point. I was of course disappointed at first, but I understand there’s more important things we have to worry about. I was planning on highlighting my recent work along with debuting new work, too. The new work will be made out of wood as a continuation of form exploration.

ID: How has the pandemic affected your practice?

NC: Obviously, it had a substantial impact. Exhibitions, projects, and sales are suspended or cancelled. The fabrications I work with are closed and the suppliers I go to are closed. However, I appreciate all the action we’re taking to save each other. Having restricted/limited access to the facilities I usually use has led me to think about new ways of conveying my ideas. I do not want to feel limited to making objects, but aim to be more open to other creative outcomes and methods. While my education and experiences are heavily based on creating three dimensional objects, I want to expand this boundary and extend my creative practice in new ways. For the past few weeks, I have felt powerless, vulnerable, and not protected as an individual.

ID: How are staying inspired and taking care of yourself and your imagination?

NC: Honestly, I’ve taken this moment as a pause for myself. Most of my practice is codependent with local resources, like fabricators and suppliers. Avoiding communal spaces has made me hesitant to be in my own studio or the shops within, as it is a shared building. It’s honestly hard to finish tangible forms of work. I’ve been watching lots of news, both from Korean and American perspectives. It’s devastating and emotional. I’m deeply saddened by watching the fatality numbers and seeing people struggling everywhere in the world. It makes you question your individual role as a member of society. I know it’s important to understand what’s really happening, and to take any small action of any level that I can do for the sake of humanity.

On a self care and personal level, I watch films about life stories of inspiring people. I also read biographies, and recently I have read more interviews of insightful people in every field. Since I was very little, whenever I face frustration, I seek motivation and learn from old wisdom. I understand every time/era must have their own difficulties, and I believe we shall pass this one too. I think inspiration is always there; it is just a matter of not losing hope and keeping a good attitude and perspective. One reason that I like to work on designing mirrors is that the mirror changes its scene depending on what you reflect on. I think your thoughts and attitude can be the same way. It is how you choose to think.

ID: What kind of changes would you like to see in the industry, moving forward?

NC: While I am grateful for the institutions, galleries, or showrooms that are investing in relatively young designers like myself, I would encourage more established brands and manufacturers to create such opportunities. It is important for the future of design to invest in working with young independent designers. It could be licensing designs or collaborations. Without financial foundations, it’s hard to keep up with creating new good design. I hope American furniture/product companies give more opportunities to young designers for working together. Merging the resources that a company has and fresh new perspectives from young talent can be mutually beneficial.

ID: If you could design one thing/project, money and resources are no object, what would it be?

NC: I’d like to expand my practice to not limit myself to creating objects, but instead free myself to a broader concept of creative practice. I also want to create a collective so that I can work with friends and talented people based on projects and collaboration. I’d like to design some place to build a community. It would include my studio, but more importantly I want the space to be where creatives can freely come together to use the facilities, share ideas, and collaborate on various projects. I have known many creative people and each have different talents to offer. I think making a space for gathering everyone would result in a synergy effect. If I had unlimited resources/money, it would be free of charge! Everyone has their strengths, and I believe in cooperation more after going through the current situation.