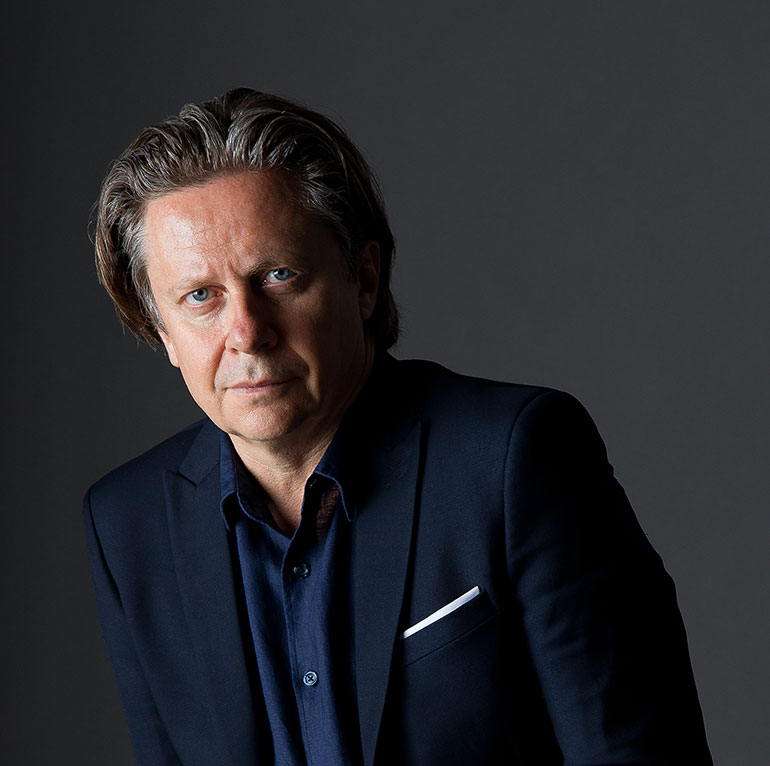 For the past two decades, few designers have done more to redefine international luxury than Jean-Philippe Nuel. Whether on land (his lengthy resume of five-star hotel projects includes the InterContinental Lyon – Hotel Dieu, located within the UNESCO World Heritage Site of Lyon), at sea (his interiors for Ponant’s new vessel Le Champlain join a fleet of ship designs for the France-based cruise line), or both (his Hôtel Croisette Beach Cannes blends seaside lodgings with a private beach club), Paris-based Nuel manages to incorporate a considered, almost literary approach to everything he touches.

After conceiving interiors for Ascott Limited’s La Clef Champs-Élysées Paris in the heart of the 8th arrondissement, along with its Imperial Treasure restaurant, Nuel has now reimagined the Sofitel Rome Villa Borghese, located in a 19th-century Roman palazzo adjacent to the famed park and villa. Preserved models and pilasters join new artwork from Cyril Destrade and Véronique Durruty on the walls, and sculptural furniture sits beneath blue-hued ceilings. He says the project, with its glass-and-mirror-encased lobby bar and restaurant floored with botanical terrazzo, combines “baroque [expression] and Italian generosity.” Nuel generously took time to speak with Interior Design about his beginnings, the difference between designing for land and water, and the pitfalls of naming a pet. The conversation has been edited for clarity and length.

Interior Design: How did your interest in architecture and design begin?

Jean-Philippe Nuel: My parents loved design and much of the furniture that has become iconic today was part of my childhood: the furniture of Saarinen, Bertoia, Castiglioni.... My dog’s name is Eames, as a tribute to Charles Eames! I hope that wherever he is, he won’t be offended! [My architect uncles] told me not to do this job because it was too hard: a lot of work for little pay. I did not listen to them, as it turns out. I think that passion is your drive. You should go for it.

ID: After graduating from École des Beaux-Arts, you won a competition decided by Kenzo Tange. What did that mean to you?

JPN: It was an international competition organized by the international order of architects; the theme was "Habiter Tomorrow" and the ambition was to explore future forms of habitats. Our work was exhibited at the Tsukuba International Exhibition in Japan. I was lucky enough to work on quite a lot of projects in Japan. The art and architecture there have been pivotal in my approach to my work. I can say I am a huge fan of their aesthetic.

ID: What was it about hospitality design that appealed to you at the start of your career?

JPN: Creating my first hotel was an opportunity, but it quickly became a passion, specifically because I was able to work on all scales of the project: space, interior, and object design. My first hotel was a boutique hotel in Paris. I was not thirty years old and my mission was architecture and interiors. When I saw it completed, I was very critical and only saw the flaws. I’m still the same today, pretty much dissatisfied; which fuels my appetite to do better each time.

ID: In 2014, you designed interiors for your first cruise ship. What considerations must you take into account when designing spaces at sea that you wouldn’t for, say, a resort?

JPN: The design of a ship from a technical point of view is much more complex because of the many standards (safety, hygiene, fire). Conceptually, there is a history of cruise liners with great American, English, and French transatlantic ships from the first part of the 20th century. This heritage did not influence me from a formal point of view, but it did inspire me. I wanted to reconnect with a certain magic of these boats. I wanted to make refined places inspired by private yachts but also large boats where guests could put on an evening outfit to go to dinner.

JPN: This is clearly an opportunity, because I had an interior designer friend, Sandy Stevens, who had been living in New York for a few years. She offered this partnership and conducted the operations very professionally, and now she is my permanent presence in the U.S. This market is a great source of inspiration for me. Every time I come here, I’m impressed by the dimensions of the cities, the strength of nature. Scale is very different here from what I can experience in Europe.

ID: In 2014, you designed a range of seating for Henryot et Cie, then another for Saint Luc in 2017. What was missing in the market you sought to address with these, and what was it like being on the other side of the desk, as it were?

JPN: We actually work for several brands: Henryot, Saint Luc, and also with Ligne Roset. We always create furniture for projects that provide the framework and inspiration for these creations. We have a dual objective, which is to meet specific uses and sign the identity of the project right down to the furniture and thus to ensure consistency at all scales. Hotels can become in a sense like a lab for real-life situations. In a hotel you can work, rest, relax, eat…and the furniture thus created can end up in housing or office buildings.

ID: The Villa Borghese and its surroundings are obviously iconic. What impression did you have of the area before you began reimagining it?

JPN: The Sofitel is named after the nearby Borghese villa, but it is not in the buildings directly attached to the villa. When I was a student, I actually visited the Borghese villa, which is a museum with magnificent sculptures. During this trip, I also fell in love with Rome, which is, along with New York and Paris, one of my favorite cities in the world. I love its complexity with all its historical strata that overlap and give it a unique identity. This passionate story with the city fed my vision to do this project. I felt like I was reuniting with an old friend.

ID: How did you decide which aspects to keep relatively untouched, and which to refresh or remove entirely?

JPN: In all reuse projects, I try to preserve as much as possible the heritage elements that are in a way the history of the project. Then I add a contemporary look that sets the project in its time, thus creating a dialogue between the eras. At all costs my goal is to preserve the soul of the place.

ID: The rooftop’s floor is so striking. Why did you decide to create a botanical tilework?

JPN: The terrace has its own identity, the view of Rome and in particular the gardens of villa Borghese have inspired the decoration. The creation of the floor is part of this theme.

ID: What’s next on the boards for you?

JPN: I am fortunate to have a wide variety of projects: a unique polar cruise ship project for Ponant, the creation of a winery and suites in the village of Saint-Emilion for Château Pavie, and a 400-room tower at La Défense.