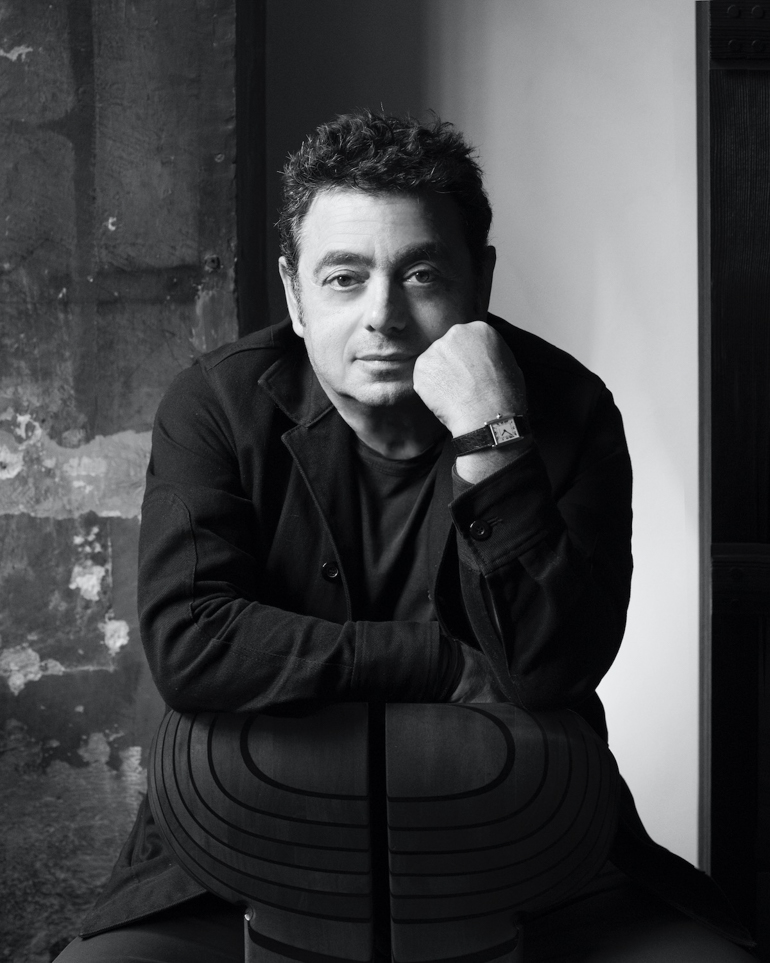 “Today’s hospitality market is geared towards authenticity, a simpler luxury, and new functions— such as an entrance hall that becomes a home living room,” says Charles Zana. Since founding his namesake firm in 1990, the Paris-based architect and interior designer has achieved success around the globe for his carefully curated hospitality and residential interiors. Dreaming up what he calls “global universes of life,” Zana scooped up one of France's most coveted honors, the Chevalier dans l’Ordre des Arts et des Lettres, last year. Most recently, he completed a fresh new interior for the Hôtel Lou Pinet in Saint-Tropez and curated a buzz-worthy exhibition at Paris gallery Tornabuoni Art. Zana sat down with Interior Design to share his thoughts on both projects, what sculptural object created by a legend while sick has particular resonance in his home, and who to call when you need a private chef.

Interior Design: What was your overall design goal for Hôtel Lou Pinet?

Charles Zana: The hotel is a revival, a recreation of the old style of Saint-Tropez and the fantastic French Rivera spirit from the 1960s and 1970s. We completely removed the existing kind of Asian-themed interior, and went back to the time of the building’s origin, mixing objects in wood with terracotta and ceramic tiles. Most furniture in the bedrooms is custom, designed with the idea that’s there’s a new way of seeing the French Rivera that is not kitschy, but modern, shining with all this Riviera spirit.

ID: Can you describe a few furnishings?

CZ: We designed lava stone tables and metal benches, such as what one would find in provincial gardens of this time period. We worked a lot with rattan and natural materials such as pine. We also asked the French artist Alexandre Benjamin Navet to create a giant fresco inspired by Saint-Tropez drawings and provincial colors.

Read next: 10 Questions With... Jean-Philippe Nuel

CZ: Until December 21 at gallery Tornabuoni Art in Paris, I presented “Utopia,” which imagines a walk through Italian art and architecture from the post-war era in Italy around the 1970s. We gathered 17 pieces by Italian artists and architects from this time and put them in pairs to create a dialogue. Basically we created couples, with one piece of design and one piece of art. One of the most iconic—according to Instagram—is of a pairing of Lucio Fontana and Carlo Mollino. My idea was to create this shock by showing them together as they are very close. To better understand in art and design, it’s really important to understand a period. There was a fantastic atmosphere in the show because the pieces are talking together, creating emotion creating beauty, and sometimes interrogation.

CZ: We’re currently working on a Kimpton Hotel for the Boulevard des Capucines in Paris. The hotel is on a listed heritage site, with historic Parisian archetypes such as moldings—but it it will be modern at the same time. It’s very interesting to work with an American hotel group, which is very well-known and now establishing itself in France. They asked for a real challenge: a welcoming and lively reinvention of the Parisian hotel of the next 20 years, with a sense of esthetics.

ID: Could you mention a furnishing you value in your home?

CZ: I live in an apartment that I designed in the heart of Paris with my family. In my living room I have a yellow and black Odalisca totem by Italaian architect and designer Ettore Sottsass. This is an important totem from his original collection created when he was ill in Palo Alto, California—he was sent there because it’s a very dry area in the desert. Sottsass was taking a lot of medicines and as a result having nightmares. During one, he had a vision that doctors and nurses were giving him pills from the ground to the sky that would help him. When he returned to Italy, he started to create columns with this vision of colored pills, one atop another, as his imagination of the medicine given to him during that period. This was the first time that he created a vase or a totem that wasn’t a single piece but with additions. I just love the piece, there’s a lot of emotion and current inside of it.

ID: How do you think your childhood or formative years influenced your design thinking?

CZ: I’ve been passionate about art and design since a young age. My father had an understanding of the avant-garde of his era that other people didn’t have. Very early on, he wanted to travel through art, so he set about passionately collecting artists and designers that few people then appreciated—or even knew about. He passed this need to be surrounded by artworks down to me. My architecture studies at the École Nationale Supérieure des Beaux-Arts in Paris, together with an encounter with Pierre Staudenmeyer, founder of the Neotu—a gallery that was a beacon of French design in the 1980s—allowed me to deepen my knowledge of the decorative arts.

ID: Could you name a person in the industry that you particularly admire?

CZ: Andrea Branzi because he is a very important Italian architect and designer who participated in movements like Alchimia, Memphis, and Archizoom. He is one of the founders of the Radical Movement in Italy and a humanist who brought poetry to furniture design. He has a unique way of composing things, with lightness and precision.

CZ: “The Hare with Amber Eyes: A Hidden Inheritance” by Edmund de Waal. He’s more well known for his art pieces than as an author, but this is the story of a great family, and interesting because it is very autobiographic. The book is really historic and goes deep inside this family, following them through Paris, Vienna, and Japan during a time that we will never see again. I am a collector, so I always like to read about collectors.

ID: Can you name a favorite craftworker?

CZ: I really like to work with the metalworker François Pouenat. I did a French hair salon in New York, and we made all the mirrors together.

CZ: Yann Nury is the best private chef that you can find in New York. I call him the ‘chef in residence,’ as he has no restaurant and no cooking space, but does parties everywhere. He’s a very interesting chef. The last time I was in New York, he cooked scallop with white truffle for me in his home and it was just fantastic.

Read next: 10 Questions With... Ini Archibong