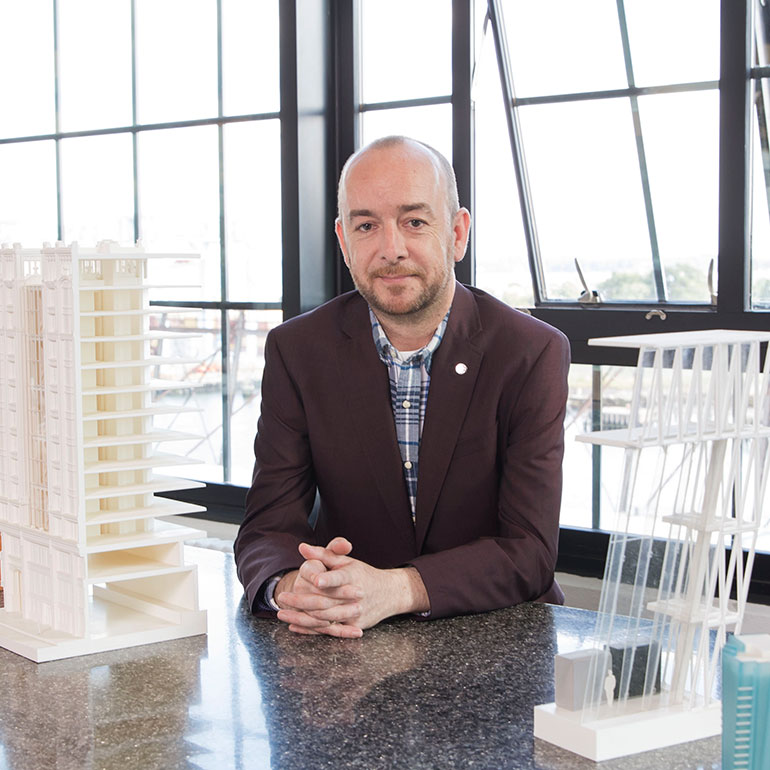 Each fall semester teachers and students dive back into their chosen studies, but for Elkus Manfredi Architects vice president Ross Cameron, the learning never stops. Born in Scotland and trained at The University of Edinburgh, Cameron joined the Boston-based firm in 2005. Since then, he’s been a key member in its long-standing partnership with the city’s educational institutions, including residence and performing arts facilities for Boston University and Emerson College. Along the way he’s become a member of the Royal Institute of British Architects, the Royal Incorporation of Architects in Scotland, the Society for College and University Planning, and the Boston Preservation Alliance’s Board of Directors. Here, in a conversation that has been edited and condensed for clarity, Cameron talks about building architecture for actors, what modern students are looking for, and how to replicate 20th-century stone florals in 21st-century concrete.

Interior Design: How did you first become interested in architecture?

Ross Cameron: I was really into technical drafting and art in high school, in Scotland. But I was also into computer science. In the UK, when you apply to university, you select six slots, and you’re encouraged to put a wildcard choice in the sixth slot. So, I had five software engineering slots, and put architecture for the last one, because at the time I was into Charles Rennie Mackintosh, but I was also writing code (laughs). I was fortunate enough to get into all five. My father asked me: Which was the hardest to get into? And I said architecture. He said, That’s the one you should go into!

ID: What attracted you specifically to designing for the performing arts?

RC: I’m in awe of how performers can take a space and tell a story with it. When we finished the Boston University Joan & Edgar Booth Theatre and College of Fine Arts Production Center in late 2018, we offered the students a highly flexible black box space, with a stage floor that’s fully trapped and lighting trusses and riggings which are all movable. We didn’t really know exactly how the students would use it. But we went to the first show there, Eugène Ionesco’s Rhinoceros, and the space was totally unrecognizable.

ID: What about the Jackie Liebergott Black Box Theatre at Emerson’s Paramount Center?

RC: We set it up specifically so you’d arrive in your seat after going through the original 1930s Art Deco lobby. So, from the curb to the seat, we thought about: What can the architecture do before the playwright takes over? We can funnel people through this opulent lobby with stained walnut walls, ornate carpet, gold leaf on the ceiling, and that gives this feeling of excitement: I’m going to a show! Then when you get to the black box theater itself, it’s very industrial. The array of windows on the eastern wall have motorized shades that all come down in unison to blacken the space before the theatrical lights come on. You’re engrossed in the show. It’s a space in which people, their emotions, can be changed by the events that are taking place on stage. And architecture can support that.

ID: The Paramount Center was your first project at Elkus Manfredi for Emerson, which saw you renovate the entire building. How did you organize the space?

RC: It was a circa 1932 cinema, which we turned into a 600-seat proscenium theater. We had to pull the proscenium wall 35 feet into the house. And the building is only 175,000 gross square feet! But somehow we fit retail, the black box theatre, a film screening room, a soundstage, a couple of classrooms, nine studios, six practice rooms, an array of faculty offices and conference rooms, and a scene shop. And then we built a 265-student residence hall, with a café. So if you happen to live in that building you can go to class, eat, see a show, without stepping a foot outside.

ID: Is that the kind of live/work experience students are looking for today?

RC: In designing for students, the first thing is to forget what it was like when you were in school, because students are very different now. They’re much more connected. They tend to be more collaborative. Those issues reflect in the thinking behind the design of the spaces we create for them, along with more prosaic issues like the security you have to be aware of with student populations. You can try to get into young minds, but really if you can build in flexibility, they’ll use it in a different way and that’s exciting.

ID: How did that play out in the Two Boylston Place residence hall?

RC: Because they are more communal, we created destination, double-height common rooms instead of the typical, miserable single-height spaces with TVs in the corner. There are five, themed as kitchens, patios, and lofts to draw down students from upper floors and encourage them to socialize. And all of the laundry facilities are only big enough for the washers and dryers. Historically, you’d have to provide space for seating because you’d have to wait there, but now it’s all wired so students get a text alert when their dryer is finished. They don’t spend time in there anymore.

ID: Where do they go instead?

RC: We built a main common room called Odd Fellows. It’s built right behind the existing historic façade of 1888, which was retained and incorporated into the new residence and is known as the Ancient Landmark Building. In 1888, there was a group of people who banded together and raised a sum of money they could draw from to give to people in distress. When, for example, a family lost a husband, they could give money to the wife to help support the kids. The social hierarchy thought this was an odd thing to do, and so this group was called Odd Fellows. We thought, that’s sort of like Emerson, this forward-thinking institution, so we ran with the idea. We put some millwork furniture in that’s quirky, reminiscent of stage sets, and wired it so it can be used for performances.

RC: Even in the dining center. That was a challenge because we had to stitch together basically three separate retail spaces, one below grade, into a unified dining hall for 540 students. And we had to connect the lower level to the upper level in a way that didn’t feel like you’re dining in a basement. So we opened an atrium-like space that lets light down into the lower levels. In the adjacent space we kept things vanilla, with lighting to create different moods. During the day it functions as a dining hall, nice and bright, and during the evening the lighting and can tuned by the students to make the space feel like a cabaret or a club, with a stage and LED panels that can be animated or colored.

ID: Renovating Emerson’s Little Building residence hall was a bit more complicated. How did you manage it?

RC: It’s a 1917 building in a neo-gothic style, and in the decades before Emerson purchased it there were failures in the mortar and the façade, and water damage got behind the cast stone elements. The steel was rusting. It was a mess. We decided to replace all the envelope material above the podium level and restore everything below. After much experimentation we ended up using this UHPC, but how do you use a cast material to replace highly ornate arch details? We found a firm in Montreal that worked with the aerospace industry and asked them to do a super-high-resolution digital scan of the entire building, which they’d never done before. Then we created a 3D model, but that picked up all the flaws, the stone misalignment and cracks, which we had to digitally rebuild. Fortuitously, Autodesk had just moved into the same building as our office, and so we began collaborating with them. We basically figured out a way to make our digital model speak to the machinery that creates the positives for the molds of the concrete panels. We also panelized the process, which took about a year off construction time. We could prototype pieces of the arch detail, 3D digitally printed at a quarter scale, blow it up to full scale and have Autodesk’s axis routers carve them out of foam—then we could send the whole model to the fabricators in Canada to create the positives and molds. We were able to do away with the entire traditional process and create a new one in which we have much more control, because our digital model is speaking to the fabricator’s machinery. That wasn’t something we’d ever done before, and our fabricators are used to making panels for outside parking garages, not neo-gothic facades with floral emblems and highly intricate fluting. But we ended up with a system we can use for future projects.

ID: Speaking of which, what’s next on the boards?

RC: We’re working on the Omni Boston Hotel at the Seaport, a 1055-key hotel with lots of great retail space and two conference rooms—and I mean large, one is 25,000 square feet—diagonally across from the convention center. And a project to rebrand Emerson’s entire front door, expanding the sidewalk and introducing some landscaping. They are willing to do things other clients wouldn’t. They’ll come along with you and riff on creativity. It’s great to get to feed off that as an architect.