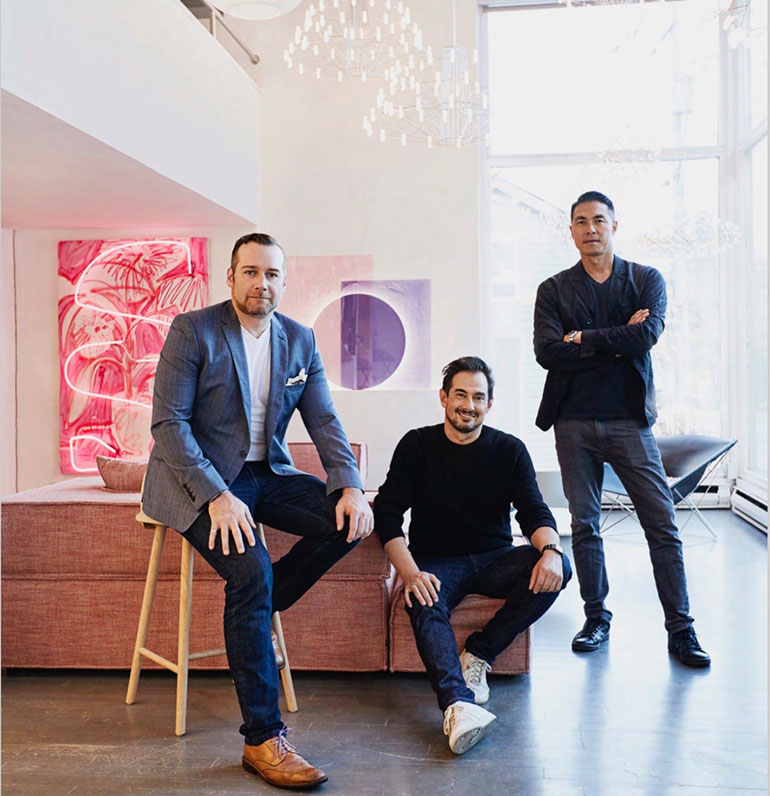 With a forward-thinking vision for a university bistro, Toronto-headquartered DesignAgency was born. Two decades after serving steak tartar to students, business is booming for founders Allen Chan, Matt Davis, and Anwar Mekhayech, who can rattle off hostel brand Generator Hostels, The Ritz-Carlton Hotel Company, St. Regis Hotels & Resorts, and culinary brands Nando’s and Momofuku from a high-profile client list. On the books: rollouts for workspace and cultural hub NeueHouse and new Hilton urban hotel brand Motto.

“These days, a designer’s vision needs to be half the business of design and half the art of design,” says Mekhayech. “There are unlimited possibilities when creating a physical space—but process, purpose, and budget lead.” To better hone these three crucial points, DesignAgency is full-service, tackling interior design, architectural concept, strategic branding, and visual communication. Projects around the globe (in addition to offices in Los Angeles and Barcelona, DesignAgency now has full-time designers in Vancouver, London, and Washington, D.C.) are executed by a divide-and-conquer technique—the three partners collaborate on creative, before letting one partner run with it.

Interior Design sat down with the three founders to learn more about that first fateful collaboration, the upcoming NeueHouse rollout, and who is a master at balloon animals.

Interior Design: So, tell us about the student bistro that brought you together.

Anwar Mekhayech: We had no business plan and it was all very organic. I studied engineering and business at the University of Toronto (U of T) but grew up in the family restaurant business. After taking over my parents’ restaurant, I decided to open my own—which I really wanted to design. So, I asked Matt, who has a degree in Landscape Architecture from U of T, to start a design company with me, and he introduced me to Allen, who was studying architecture at Columbia University.

It was all very fast—I graduated in 1997, we formed what was then called Precipice Studios in 1998, and I opened a student bistro at U of T that we designed in 2000. My dad was living in Paris at the time, opening a restaurant there, so the concept became a kind of French-bistro-meets-California-casual-organic—but in 2000, so way before its time. We had DJs playing, and were serving students steak tartar, duck confit, and healthy salads. It was so much fun.

ID: NeueHouse is a big project for you. What exactly does it entail?

AM: We’re renovating the two existing properties and are about to open a third in downtown Los Angeles, NeueHouse Bradbury, which will help explain our design ethos and narrative as we scale the brand to new locations globally. Our design aims for residential and inspiring, balancing private and social, but with a strong emphasis on collaboration and communication. There will be a play of vintage and new pieces across all the projects—and I’m super excited about the art program and the use of plantings.

ID: How do you believe NeueHouse meets current demands in the hospitality market and stands out from the likes of big players like WeWork?

AM: Sophistication and refinement. NeueHouse is more an invited member’s club that centers around working, content, and collaboration than co-working. It has a kind of celebrity following because they started ahead of the curve, in 2012 in New York. So last year, Josh Wyatt entered as CEO, and immediately brought us onboard. We worked with Josh on Generator Hostels and have a great relationship with him. Together we’re adding the food and beverage hospitality angle—the restaurants, bars, and patios because that’s what we are good at—building off the original concept based on bringing likeminded people together by Rockwell Group. We’re also ramping up the amenities where possible, for example spa-like showers and changing rooms for people commuting by bike or spending extended amount of time on site.

NeueHouse has several different types of membership. Netflix, for example, is a tenant in Los Angeles, with their own private studio floors on the upper levels. Actually, DesignAgency’s Los Angeles studio is also in NeueHouse—we moved in just a few months ago.

ID: What have you completed recently?

AM: We developed the design language and ethos for Momofuku spaces and recently designed three new restaurants for them: Kõjin in Toronto, and Bar Wayo and Kawi in New York.

In August, we opened the Mama Rabbit Mezcal + Tequila Bar at the MGM Resort in Las Vegas. It’s a super-hyper and colorful space inspired by the boldness of Luis Barragán, and using fun Okuda art [by Spanish artist Oscar San Miguel] mixed up with materials inspired by the Oaxaca region of Mexico.

Allen Chan: The St. Regis Toronto, the first St. Regis in Canada, opened in December 2018. A lot of details make the place really interesting, rich, and inviting. The overall language is sophisticated and modern, but a favorite design move happens in reception on the ground floor. There was limited space, so we hybridized reception with the cafe and bar, around an element that we have been calling the ‘jewel box’—defined by a lot of bronze and brass with dark wood like walnut. There’s also a really cool textured ceiling.

AM: Two resorts—one in Costa Rica, and one in Prince Edward County, Ontario (the Irth Landscape Hotel). Both projects are hotels that are fractured across spectacular sites and combine hospitality, landscape, food and beverage, master planning, and experience curation.

We’ve also recently collaborated with Hilton to launch Motto, Hilton’s new global micro hotel brand. Together we were able to do a deep dive into the emerging needs of the new urban traveler and craft an experience that precedes guest arrival and touches upon every aspect of the guest journey throughout their stay. Motto is designed to be rooted in the community with open, public-facing amenities and will offer guests the ability to customize their stay via a scalable (linking) room program. We have a Motto for Savannah, Georgia underway.

In Portugal, we’re starting a hotel project for the owners of the hostel-hotel The Independente. They’ve put together a whole bunch of buildings in Lisbon, and it will be a hostel-hotel with about 150 rooms and a rooftop pool, in the central Principal Real area of Lisbon.

AC: The 160-room Andaz hotel in Toronto is a project we are working on for Mizrahi Developments. It’s a landmark project for the city because the building, when complete, will be the tallest building in Canada (designed by Foster + Partners) at One Bloor West, probably the most coveted address in Toronto. Because of the nature of the project and its location, and the very expensive residences above, this Andaz will be something a bit different than other Andaz locations. It will have a level of luxury that you would expect for a building and development of this quality and magnitude.

ID: How do you see the hospitality market changing over the next decade or two?

Matt Davis: In the past decade, we’ve seen some massive, unpredicted shifts from disruptive companies like Airbnb as well as market and consumer-driven influences—and this really changes the way the next 20 years will shape up. I’d suggest that technology will continue to play an important role in how people experience spaces. Seamless transaction, booking, and room or desk access will continue to change the way operators interact with their guests. As this is redefined, the experience of lobbies, reception, retail, and dining will need to adapt and take on new spatial qualities.

I would also predict that the world of construction and design will massively change, with spaces constructed extremely quickly. This could then spin off to further shorten trend cycles and hospitality refresh rates. A project which currently takes 30 months to design and build today may be compressed to 18 months. Therefore, something meant to have a 12-year refresh rate may see it shortened to six years.

ID: How do you think your childhood or formative years influence your design thinking?

MD: I would have to attribute the core of my design thinking to my undergraduate studies in Landscape Architecture at the Daniel’s School of Architecture, Landscape and Design at U of T. Here we learned that design is an open system existing in time and space…not frozen objects or inaccessible monuments. We were taught that spaces are not simply defined by walls but rather—more critically—by the moments and experience that fill in the voids.

AC: I was always into making things when I was young. My family is far from creative, but I think that brought a desire to seek it out. We were lucky to grow up in the 80s—sci-fi and space travel were big topics. I ended up being a bit of a sci-fi nerd, drawing space battle scenes and my own spaceship creations and making plastic models. Back then, we had no video games, DVDs, or smart phones, so the imagination was forced to develop. It was at this time that I picked up a passion for drawing and making things with my hands.

AC: Le Corbusier was super interesting and brilliant, yet slightly crazy. His ideas are definitely engrained in the way I think about form, utility, and design.

Also, Rem Koolhaus as one of the first generation of quirky Dutch star-architects. I really appreciate the way he thinks and rationalizes the architectural ‘problem’ and its solution, and enjoyed reading “Delirious New York: A Retroactive Manifesto for Manhattan.” Koolhaus coined the modern Dutch aesthetic, and spawned offices like REX, BIG, and MVRDV. And let’s face it—ramp buildings are cool.

AM: The icons on the client side have always resonated with me. So, Ian [Schrager], Andre [Guettouche], Barry [Sternlicht], and Nick [van Marken]. These guys have a vision, believe in design and the power it has, and have directed concepts and brands for decades with uncompromising fervor.

AC: I just finished “Mirrors of Infinity: The French Formal Garden and 17th-Century Metaphysics.” Sounds super boring but my landscape architecture undergrad allows me to appreciate this subject matter. In particular, the analysis and relationship of optics and the design of gardens at Versailles and Vaux-le-Vicomte. Both places I’ve been to and studied—huge fan.

AM: I love being by the ocean. The question always is, where am I going to create that little oasis, the little surf shack for disconnecting and getting away? Costa Rica is in the lead right now.

MD: I design to music. Each project often gets its own sound track that I’ll listen to repeatedly over the entire duration. Answering these questions was done to the album Anima by Thom Yorke