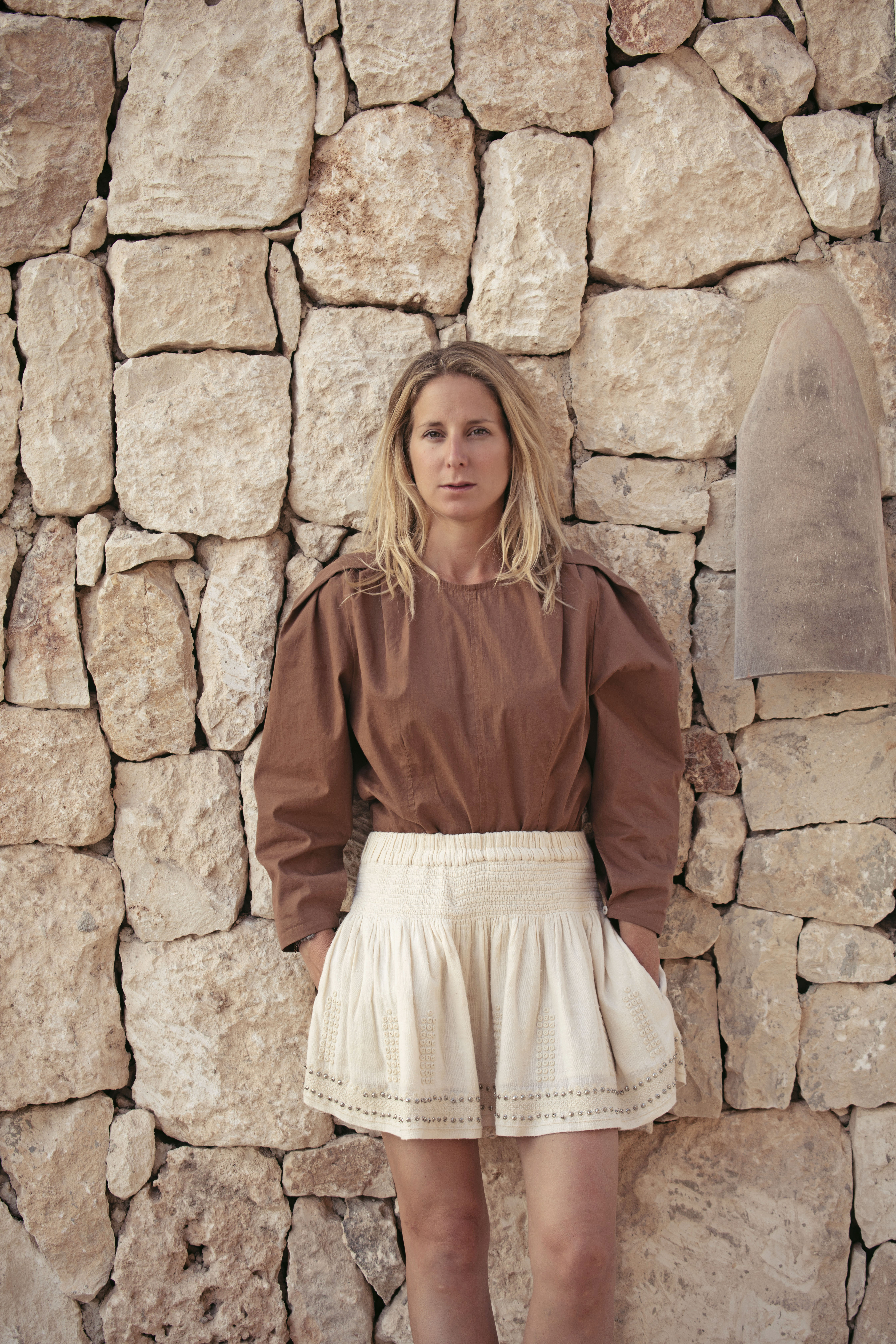 Dorothée Meilichzon was just 27 years old in 2009 when she set up her own studio, Chzon, in Paris. Since then, she has gained a reputation in the French capital’s hospitality industry for her design work for Hotel Paradis, Grand Pigalle Hotel, Hotel Bachaumont, Hotel Panache, and Hôtel des Grands Boulevards. In London, she designed the playful yet sophisticated Henrietta Hotel with a mix of patterns and contrasting shapes, as well as eight different paints (light pink, light blue, dark navy blue, faded blue, emerald green, military green, a faded red and a very light gray). Meilichzon’s newest project, Menorca Experimental, reflects the stylish simplicity of its main building combined with her own talent for introducing pops of color. Always busy and passionate about every project she works on, Meilichzon is also about to unveil her first hotel in Italy. Interior Design sat down with her to talk about her first memory of design, being inspired by artists, and how she gets everything done.

Interior Design: Could you tell us how Menorca Experimental started? What is the story behind it?

Dorothée Meilichzon: With the Experimental Group—founded in 2007 by childhood friends Olivier Bon, Pierre-Charles Cros and Romée de Goriainoff, and joined later by Xavier Padovani—we were looking to create a hotel in Ibiza, but we got this amazing opportunity to turn a 19th-century finca [agricultural estate] on 30 hectares of land in Menorca into a dream project. I had never been to Menorca before and it was a great discovery. The island is really amazing, so preserved and beautiful. With 43 rooms and nine private villas, it is the biggest project I have done so far.

ID: What was your overall design goal for this project?

DM: My objective was to create the summer residence of an imaginary artist. As the houses of Mirò in Majorca, Dali in Cadaques, and Picasso and Le Corbusier on the French Riviera, this property is dedicated to drawing, contemplating, listening to music, and admiring the beautiful landscape. I wanted to go away from the all-white and floated-wood atmosphere that was too easy. So, I designed something with a lot of personality while using some traditional savoir-faire and materials such as concrete-built furniture, terracotta, half-circled shapes, architraves, wood shutters, and recycled materials from former farms, including wooden beams, roof tiles, and marès stones.

ID: How has the hospitality market changed over the past 10 years?

DM: It is a lot more demanding, which is a great thing! We need to pay attention to every detail and work on the overall experience. People expect more than a nice décor and good food.

ID: How do you think French design culture impacts you?

DM: The French heritage is a huge chance as it allows me to be creative by playing with various styles and using the multiple influences we’ve inherited.

ID: What is your first memory of design?

DM: Raymond Loewy was the first designer I heard of. Then I discovered Philippe Starck at the age of 11 or 12 and decided that I wanted to become a designer.

ID: Can you name some people in the industry who inspire you?

DM: The list is long! Jaime Hayon; he has a really strong aesthetic that I love. Cristina Celestino is also amazing. We are working together on the hotel in Venice, Italy—Il Palazzo Experimental—which will open soon. I like many American designers, too, such as Commune and Roman and Williams.

DM: A typical French apartment in Paris with too many pieces of furniture!

ID: What projects have you completed recently?

DM: Hôtel des Grands Boulevards in Paris. It is a little secret, which is home to a large restaurant led by Giovanni Passerini, a small cocktail bar dear to the Experimental Group, and many terraces and courtyards. There is a mix between indoor and outdoor spaces. In the 50 rooms, I played with the splendor of the 18thcentury, when this hôtel particulier was built. Another is the Henrietta Hotel in London. The brick tone of the street’s buildings inspired the colour palette of the rooms and restaurant. As we are very close to the Covent Garden Market, I used a lot of flora and fauna elements and details from biophilic design, such as the giant hand-painted tigers on the ceiling, herbarium frames on the walls, and lush green and terracotta tiles, among others. I wanted to create a British atmosphere but with a mix of elements from different eras, which is not that usual in the places I know in London.

ID: What is your upcoming project?

DM: Il Palazzo Experimental in Venice, Italy. It is a new hotel with only 33 rooms situated in an old palazzo. It will open at the end of August. I am so happy to have the opportunity to work in such an amazing city.

DM: I am a workaholic.