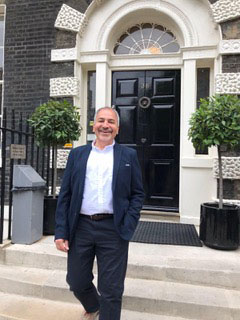 Navid Maqami, co-founder of S9 Architecture, died July 19 in Manhattan after a year-long battle with cancer. He was 59 years old.

The prolific architect, who founded the firm with John R. Clifford in 2011, passed away surrounded by his wife of nearly 40 years, Niloo, and their two sons, Arsean and Arman. Under the leadership of Maqami and Clifford, S9 Architecture brought home two NYCxDESIGN Awards for Brooklyn-based projects. These include the Shining Moment Award for Empire Stores in 2018, which spotlights a quintessentially New York design concept, and the On the Board Award for Dock 72 in 2016, which lauds a project still in the design or construction phase.

Dock 72 – one of the firm’s most praised works – celebrated its grand opening just weeks before Maqami passed away. Maqami led the design process for the project, reimagining the Brooklyn Navy Yard as a hub of innovation that fosters technology, manufacturing, and creation while paying homage to its maritime routes. Dock 72 also received the Excellence in Design Award from the New York City Public Design Commission in 2016.

Maqami, born in Iran and raised in the United Kingdom from the age of 13, attended Oswestry Boarding School before graduating from the Architectural Association School of Architecture in London in 1984. He moved to New York in 1987 and worked at Davis Brody and GreenbergFarrow before launching his own venture with Clifford. Throughout his career, Maqami remained a true storyteller – offering narratives to contextualize each project. He earned more than a dozen awards, including nods from the Municipal Arts Society and the Urban Land Institute.

Maqami was a member of the American Institute of Architects, The Architectural League, the Urban Land Institute, and the Urban Design Forum. A celebration of his life will be held Saturday, July 27, at the S9 Architecture office in Manhattan.  Please visit S9 Architecture for additional details.