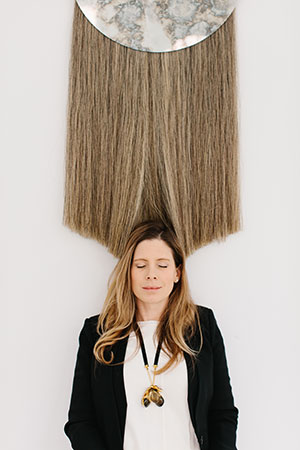 In October 2018 interior architect and designer Amanda Pratt opened the doors to Salon, a gallery-showroom-incubator hybrid in Boston. A space of her own making, Salon serves the dual purpose of supporting the city's bourgeoning contemporary design scene and showcasing the significant role women designers have played in modernism.

Pratt curates the series of exhibitions that feature the work of mostly-female designers, both established and up-and-coming. On May 20, as part of NYCxDESIGN, Pratt will host a panel at Next Level with four women designers on the topic of how commercial success can impact creativity.

Interior Design caught up with the designer-turned-entrepreneur to discuss how Salon came to be, and the importance of bringing much-deserved recognition and pay parity to the number of incredible designers who just happen to be women.

Interior Design: Can you share a little bit about your background leading up to the idea to found Salon?

Amanda Pratt: Both of my parents were the first in their families to go to university. My father hitchhiked the entire eight hours to get to school each fall and worked construction every summer to pay for the next year of schooling. He became a civil engineer and founded his own construction company. I watched him build his business from the ground up and began working for him as a laborer on the construction site at age 13. It didn’t matter that I was a girl, he wanted to make sure I learned a work ethic and a trade that would always allow me to pay the bills.

I went on to attend Princeton and Columbia and swore to myself that I would never end up working in construction again. Fast forward almost 20 years and here I am, running an interior architecture firm that I founded while living in Hong Kong and a showroom and gallery that serves as an incubator for female-focused contemporary design.

Read more: These Four Women Are Shaping the Future of Design

ID: You’ve said before that when you first embarked on creating Salon, you didn’t necessarily set out to focus on designers who were women, but gradually realized the designers you really wanted to highlight happened to all be women. Can you tell me about how you approached this realization in terms of planning Salon as a business (in the context of planning exhibitors, programming, marketing, and press)?

AP: Salon’s focus on female designers and makers in the contemporary design space came about somewhat organically. I set out to curate a collection of work that honors what I think are the fundamental tenants of good design: originality, innovative use of materials, and process. There is so much overlap and inauthenticity in design today. I want people to walk into Salon and encounter objects they have never seen before but that remain approachable.

When I began selecting the first round of designers whose work would define Salon’s mission and aesthetic, I found that the majority of them were women. While I am incredibly proud to represent the transformational work of so many incredible women, I want the focus of the programming to be on the caliber of work created by this amazing group rather then their gender. The gallery shows are meant to usher viewers through a survey of original work by female designers and makers that straddles the boundary between fine art and design. We are intent on creating a platform that helps women achieve price parity and the appropriate recognition for their contribution to the field of contemporary design.

ID: You’ve since been vocal about Salon’s mission to showcase the work of established and up-and-coming designers who are women; what has been the response from the larger design community? Were you initially apprehensive about what the response would be?

AP: We have had an incredibly positive response from the larger design community. I think both designers and those who appreciate beautiful things come into Salon and are blown away by the pieces they encounter. There is absolutely an appreciation of Salon’s focus on the work of women, but I think there is a broader recognition that, regardless of the gender of the maker, the work is transformational.

I was absolutely apprehensive about what the response to Salon would be! This stemmed more from the fact that I was introducing a new concept in a relatively conservative market place.

AP: I spent the first half of my career working in industries such as construction and investment banking that are notoriously unfriendly to women. Inequality was the norm for me.

My moment came when I was working in Hong Kong and I overheard to two male managers talking about a woman one of them had just interviewed. He said that the female candidate was impressive and fully qualified but she followed her husband to Hong Kong and soon enough she would want to join the ranks of women who had lunches and babies so there was no point in hiring her. How do you contemplate a professional future in an organization lead by people who share this point of view?

I decided that I could not tolerate working in that type of environment and vowed to be a woman who recognized and supported the strengths and contributions of other women. This lack of parity exists in all industries, but recognition brings about change. Salon is my attempt to address this inequality in the contemporary design space.

ID: Do you consider your curatorial approach to be intersectional?

ID: Are there any particularly jarring statistics that you’ve come across concerning the representation of designers who are women or pay parity in design?

AP: According to the National Museum of Women in the Arts, female designers and makers make up 30 percent of artists represented in commercial galleries and only 27percent of artists shown in major exhibitions in U.S. museums. In 2018, painter Jenny Saville set the record for the most expensive art sale by a female artist ever—but her accomplishment was overshadowed by a Bansky painting shredding stunt. Women need galleries like Salon.

I had the pleasure of spending time with Amy Sherald at Salon today. I noted how extraordinary it was that she has been able to achieve so much in an industry that has traditionally failed to recognize the incredible contribution of women. She said that the best advice she ever received was to ask for what you want. Amen!

ID: What gives you hope for the future of the design industry in the context of how women designers are recognized, shown, and compensated?

AP: The fact that Salon is being recognized for its mission gives me hope. The extraordinary content of the work being produced by women in design gives me hope. Like all things, it’s merely a matter of time, education and perhaps a bit of passion!