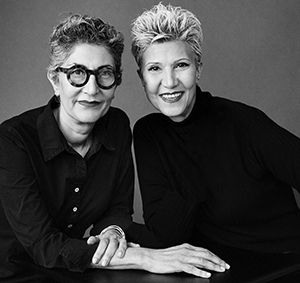 Sisters Gisue and Mojgan Hariri have designed build­ings, furniture, and even jewelry. But they had yet to conceive an installation as large and impactful as “Contemporary Muslim Fashions,” which occupied 12,000 square feet of the de Young Museum in San Fran­cisco and had 105,000 visi­tors during its 3 1/2-month run. But, having been born and raised in Iran and recently completing an office tower and a hotel there, the Interior Design Hall of Fame members and partners at Hariri & Hariri Architecture in New York were the perfect fit for the job.

Educated at Cornell University, they have long straddled old and new worlds—and that duality was on display at the exhibition, a contemporary, black-and-white environment infused with traditional Islamic elements.
The photography and women’s garments repre­sented an international interpretation
of Mus­lim culture and fashion by such known names as Yves Saint Laurent and Oscar de la Renta as well as by emerging designers and artists from Saudi Arabia, Malaysia, Indonesia, and the U.S. The result revealed modest dress is not something simply imposed on Muslim women but also a means with which they can empower themselves.

Interior Design: How did the commis­sion come about?

Gisue Hariri: Then director and CEO of the Fine Arts Museums of San Francisco Max Hollein had been looking for women architects from the Middle East, so the exhibition wouldn’t be a Westernized interpre­tation of Islamic fashion and architecture. He knew us already, having
seen our Jewels of Salz­burg mixed-use development in Austria. We were both thrilled and concerned by the prospect. To be the architects of a mega exhibition was truly exciting. However, it had a political nature. Muslim women are being increasingly targeted for using their fashion choices to assert their independence and identity. We strove for the exhibition to foster a positive examination of a community that’s often talked about but rarely given the chance to speak for itself.

ID: How did you achieve that?

Mojgan Hariri: Islam is often presented as resistant to modernity. But it’s actually a multicultural faith. True, the dress of its practitioners is influenced by religious principles but also by local customs and traditions as well as global fashion trends. So we showcased that diversity. We highlighted that what Muslim women wear in Malaysia or the Philippines is so different than in Saudi Arabia or Iran. All the mannequins were displayed on pedestals. Visitors had to look up to see them, showing the power and beauty of the women in the Muslim world.

MH: Yes. To explore the interplay between the seen and the unseen, we designed two MDF screens with CNC-cut geometric patterns. In Arabic they are called mashrabiya, which are commonly used in the region as windows to look out of without being seen, mainly for women. There was one screen at the show’s entrance. Further in, there was a photograph of a traditional Muslim woman in a black veil behind the other screen. And we also had geometric patterns projected on to surfaces.

ID: Did your design draw parallels between Muslim dress and Muslim architecture?

GH: We took inspiration from the veil, or “gaze,” in organizing the spatial configuration, allowing visitors to see and be seen through various openings and portals. The “gaze” in this context became a charged signifier of sexuality and power. Our interpretation of what outsiders see as this dark, impenetrable environment became the existing walls of the galleries, which we painted black. But once visitors entered, they experienced a new, modern world which we achieved with the arch, an archetypal element in Islamic architecture. But we deconstructed and reinterpreted it in various ways. There were tall, white, partitionlike arches throughout. Then, the exhibition ended in a pair of transparent, tubular arches reminiscent of Muslim vaulted masonry spaces. The arch is protective, like a veil but, in the way we used it, also contemporary.

ID: What did you wear growing up in Iran?

MH: Mostly T-shirts and blue jeans. The Iran we grew up in was rapidly becoming a modern country, and the emphasis on education, art, and fashion was part of our upbringing. At that time, state and religion
were separate. All religions were respected even though the majority of people were Muslim. But we were and still are familiar with how the more conservative and religious people dress, because we’d see them on the streets and in the bazars, mosques, and rural areas.

ID: Why were some platforms in the exhibition angular?

MH: Since the whole show was sensual in form and fluid in space, the platforms follow the organic look of desert rocks, which has been a through line in our work. From early on, we’ve collected rocks and studied geological formations, fascinated by nature’s abstract, asym­metrical patterns.

ID: Is that why there’s a sensual nature to your work generally?

GH: When we founded our practice, we realized that the whole education of architecture is based on male thinking, with a lack of the intuitive and the poetic. The result was often banal grid structures and pragmatic boxes. We learned to look within ourselves and find a way to express our own ideas and experiences. Good design is when sensuality, beauty, functionality, technology, and philosophy connect the body and mind.

Keep scrolling to view more images of the exhibition >

> See more from the April 2019 issue of Interior Design