We all know what April means: rain showers. So, to start the month we're celebrating the drizzles and downpours that occur indoors with a look at the best shower designs in residential and hospitality projects.


1. Mohammed Kabbaj Builds a Brutalist Villa on the Site of his Childhood Home in Casablanca 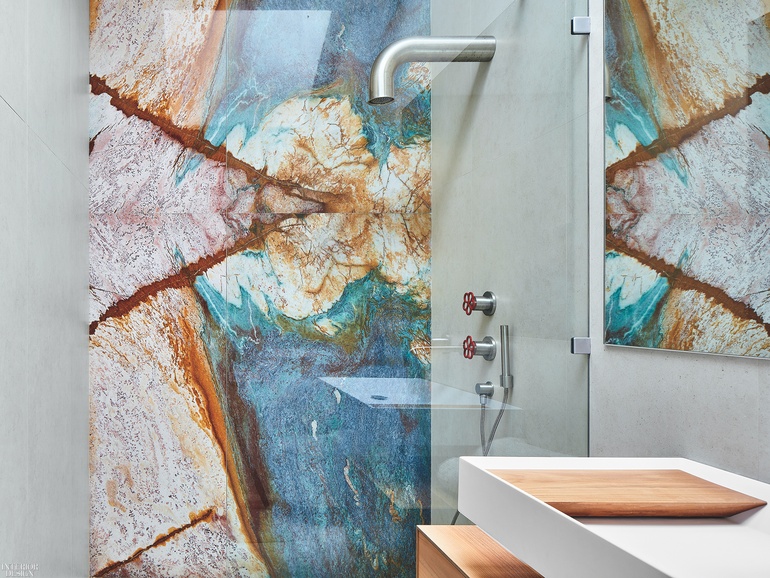 The four-bedroom house Mohammed Kabbaj designed sits on the exact footprint of the French 1940s bungalow in which he grew up. He made sure to provide each of his children with a large bedroom and en suite bathroom. “Today, kids sometimes stay at home into their late twenties, so you have to design rooms for adults that are suitable for children and not the other way around,” he reasons. His son’s shower, which features a wall sheathed in colorful Brazilian marble, is particularly stunning. “I sometimes sneak in to use it myself.” Read more 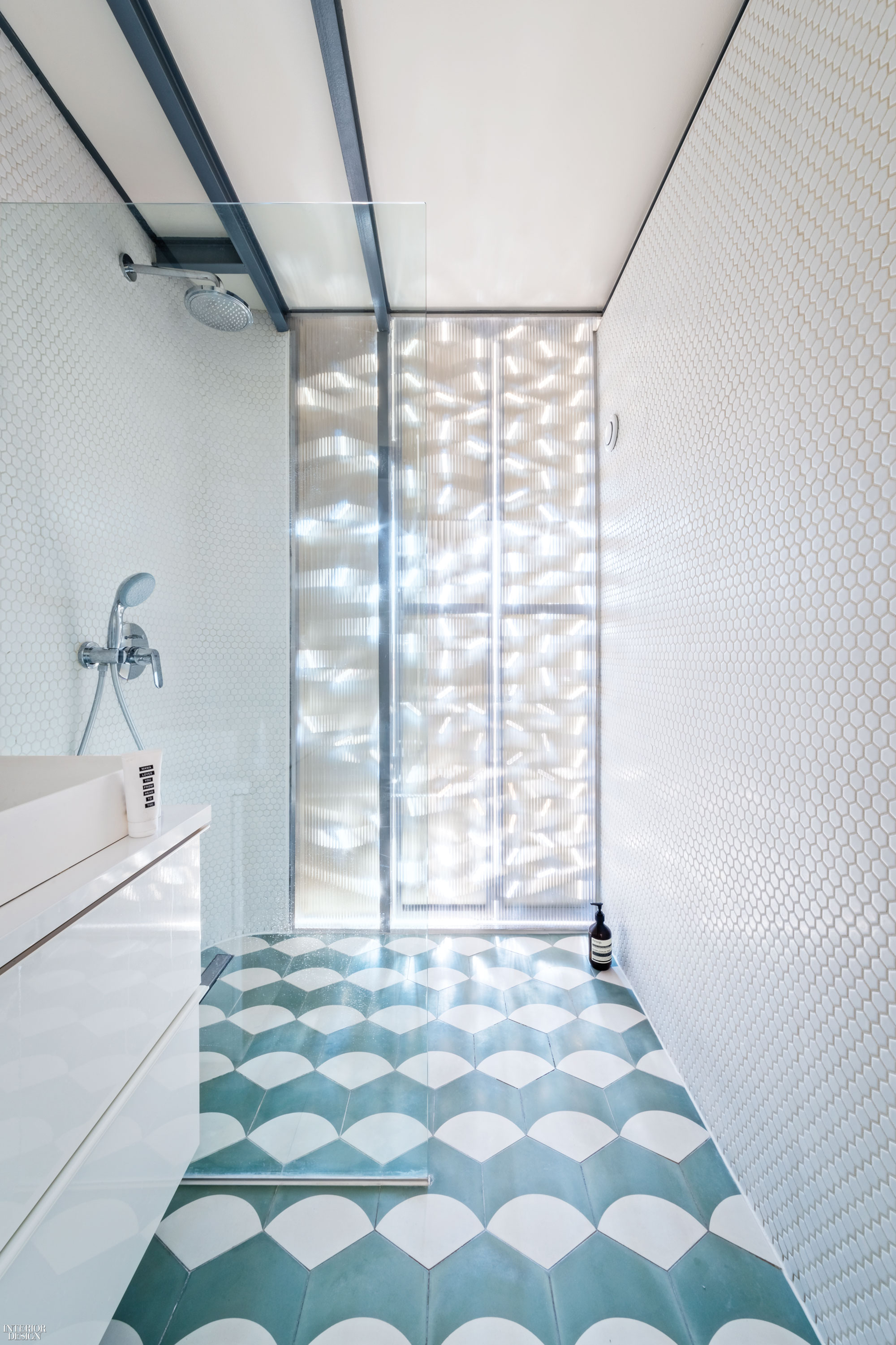 Giving older spaces new life drives SABO Project’s founder and principal Alex Delaunay. A 1920s Paris loft was in need of just such attention. Delaunay added a single volume to house the master suite, storage, and a lofted guest bedroom. Cement tiles clad the floor of the master bathroom, which is inside the volume. Read more

3. John Pawson Transforms a 19th-Century Former Hospital Into the Jaffa, a Luxury Hotel in Tel Aviv 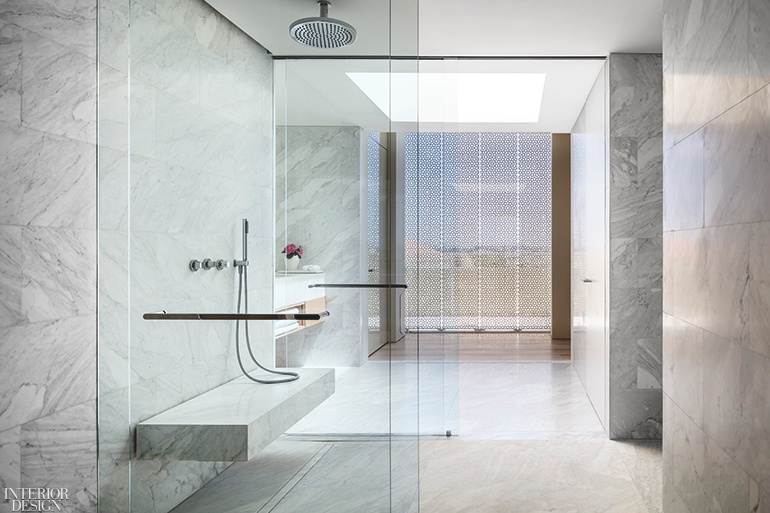 What was a French 19th-century hospital is now, thanks to a sensitive restoration and the addition of a new building by Interior Design Hall of Fame member John Pawson, the Jaffa, a luxury property featuring 120 guest rooms and suites, 32 residences, two restaurants, and a spa. Furnishings are characteristically restrained and chic. In the presidential suite, subtly veined Carrara marble envelops the master bathroom. Read more 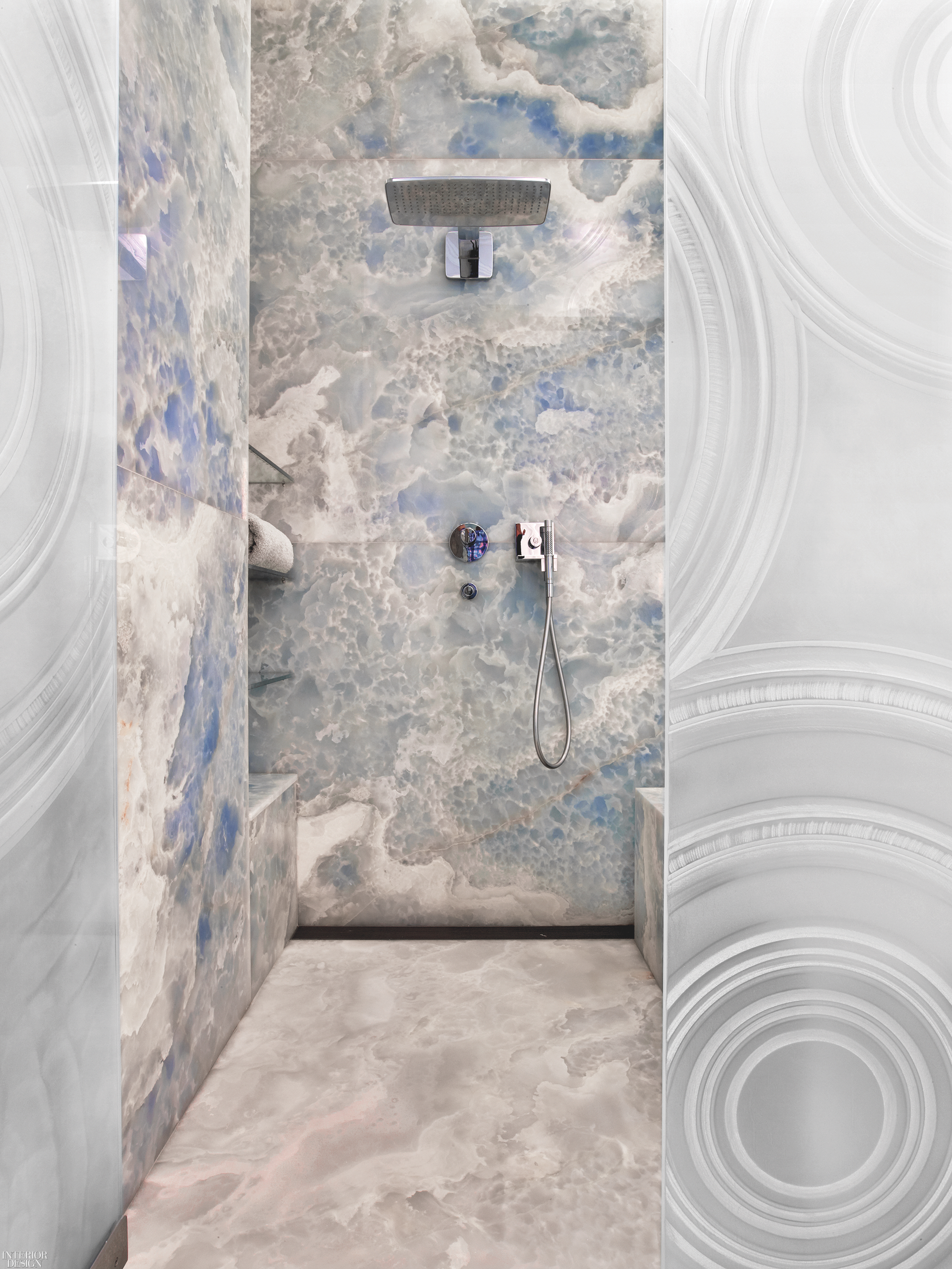 5. Humbert & Poyet Combine Rough and Refined for the Interior of a Swiss Ski Chalet 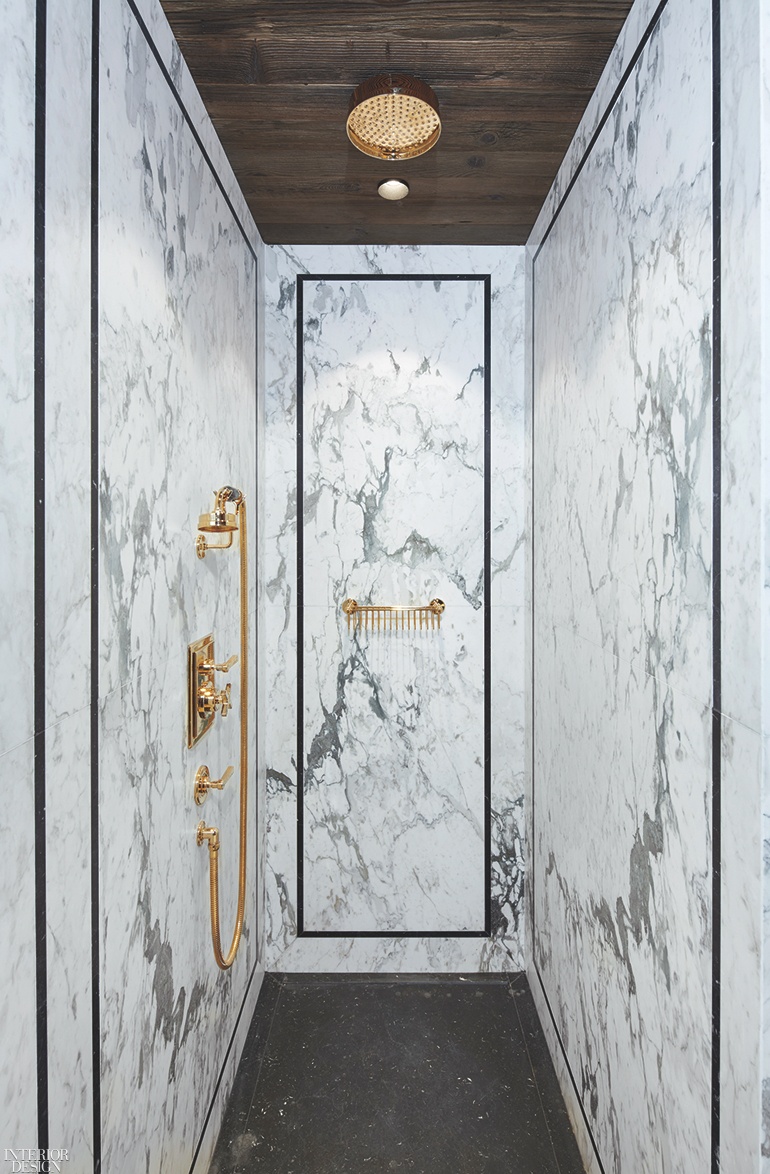 Humbert & Poyet have designed ground-up houses but prefer focusing on interiors, often entering projects when the shell is done but the inside is still raw. There’s nothing raw about their completed work, however, which 36-year-old Poyet describes as “like a movie set, the perfect environment for the perfect place for one particular moment that makes people feel beautiful and good about themselves.” Read more

6. A Chelsea Apartment With a Touch of Voyeurism by Alexander Gorlin and Larsen Design 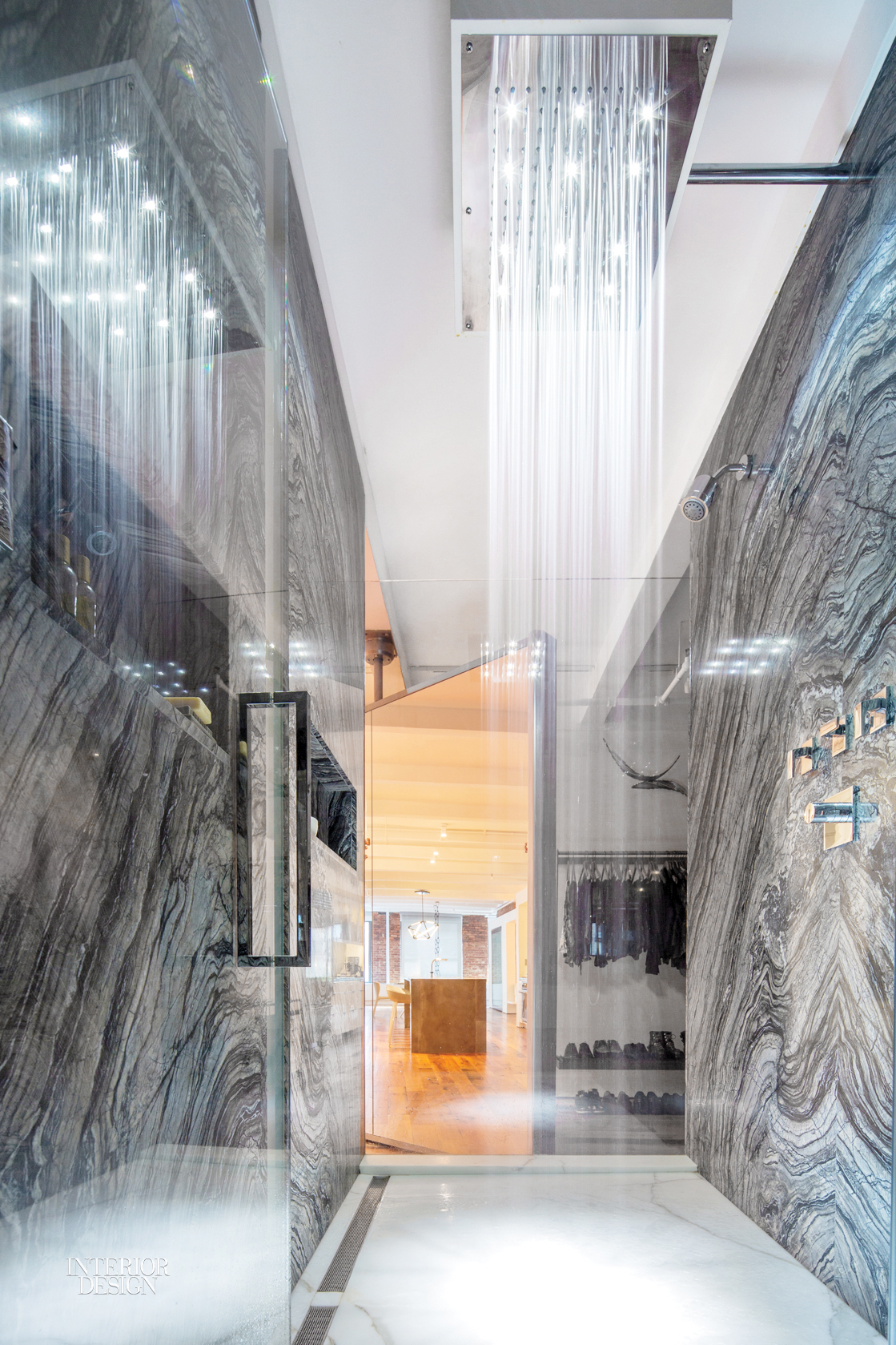 Alexander Gorlin Architects extended the floor plan straight back from the living room, so the dining area and the open kitchen serve as a sort of thoroughfare to the master bedroom. “The vector culminates there,” Gorlin notes. Which helps to explain the mirrored pivot door. When it’s open, the mirror can reflect the occupant of an enormous glass-fronted, marble-lined shower. . . for anyone in the public space to see. Read more 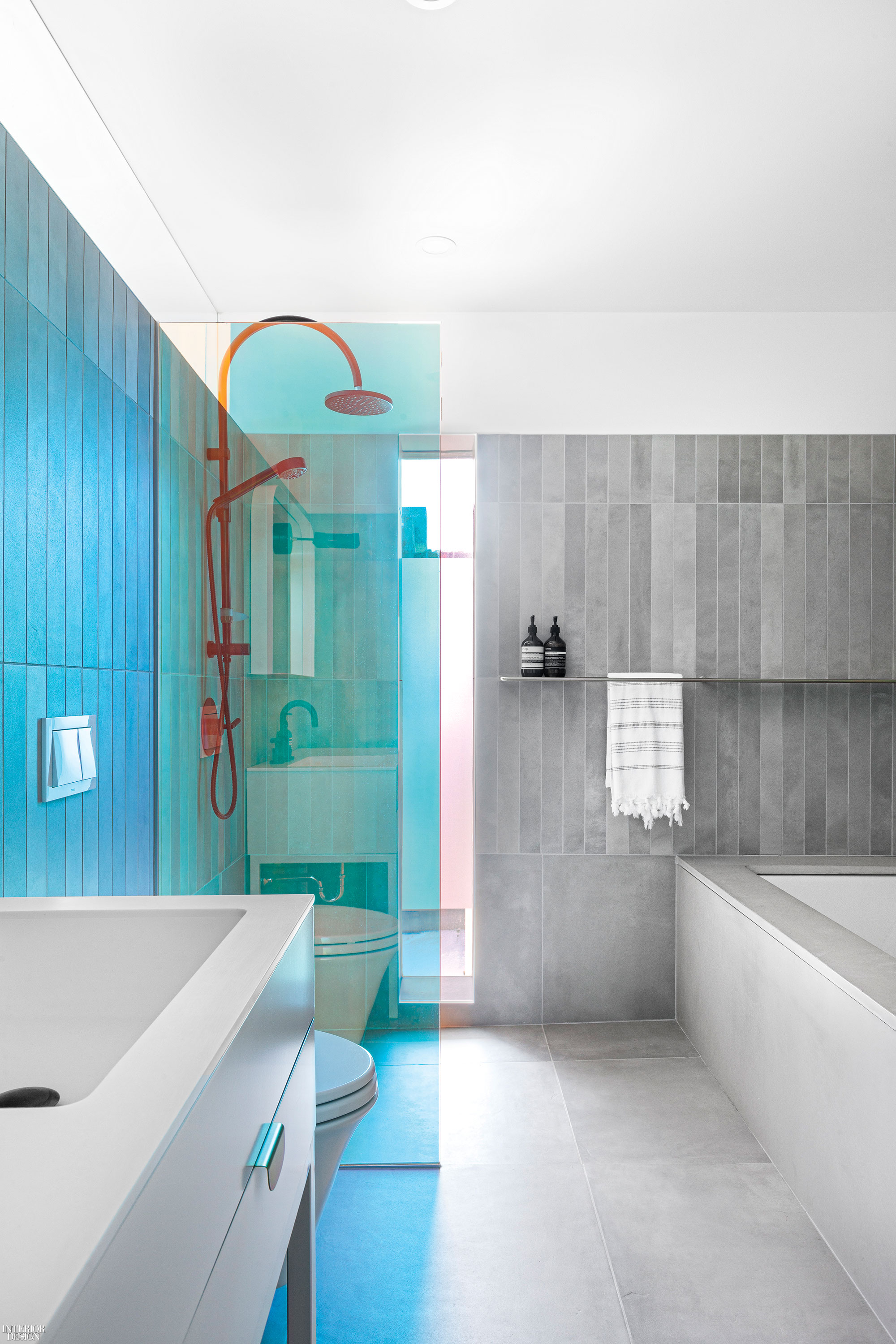 In 1967 Montreal, architect Moshe Safdie designed a futuristic apartment complex on the banks of the Saint Lawrence River as a pavilion for the World’s Fair commonly known as Expo 67. Half a century later, the new owners hired Rainville-Sangaré to renovate their brutalist style apartment in the complex, which hadn’t been fully updated since the 1980s. Glass panels sandwiching dichroic film partition the shower in the master bathroom. Read more 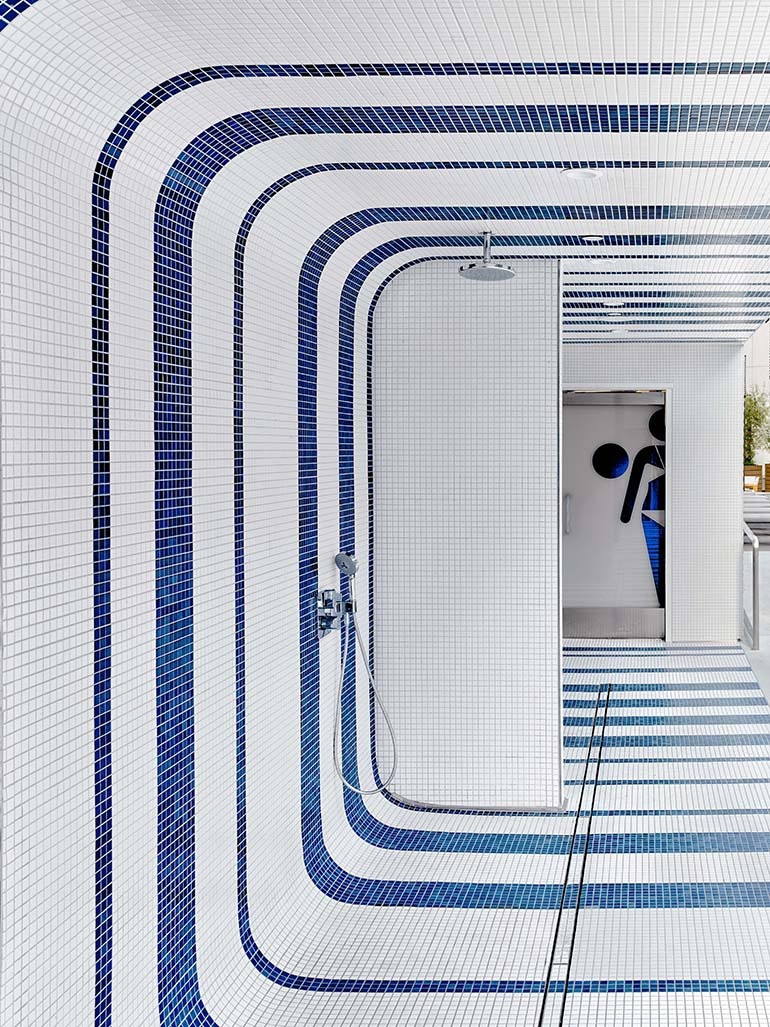 This one-million-square-foot hotel by AC Martin Partners includes a street-level entry, a sky lobby up on the 70th floor reached via high-speed elevators, 899 guest rooms and suites, three restaurants, two ballrooms, and a gym. For sure, AC Martin needed figurative conceits to tame the vastness. Showers accompany the 90-foot rooftop pool. Read more 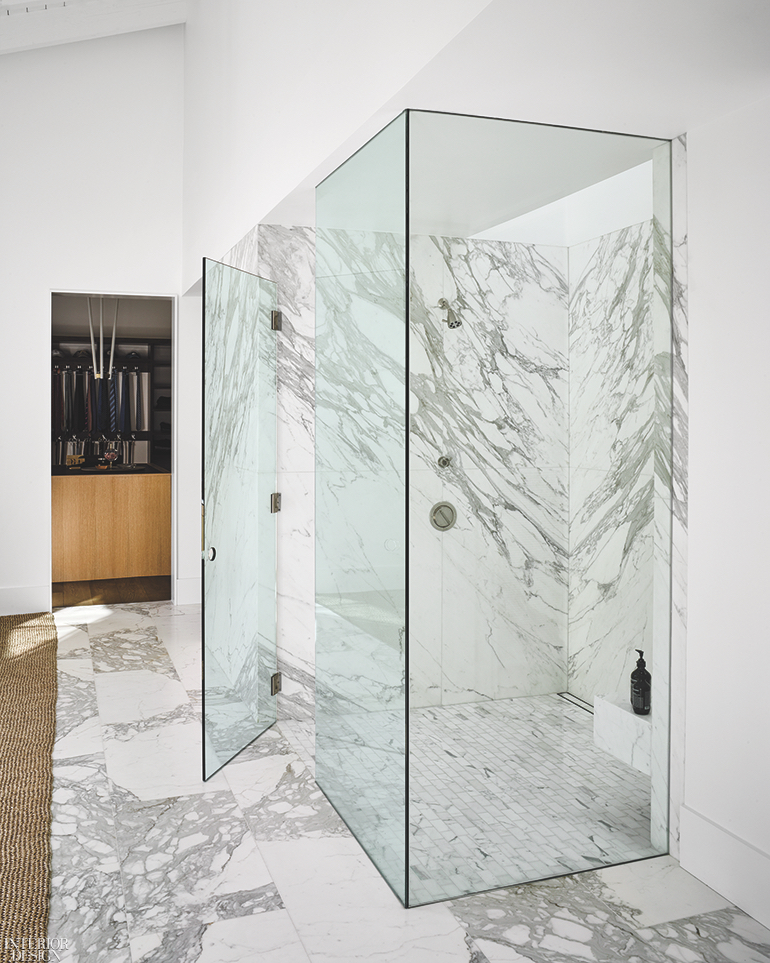 Designer Nicole Hollis sometimes refers to this barn-ranch hybrid in Thousand Oaks, California, as a “branch,” while architect Bob Hale of Rios Clementi Hale Studios calls it a “modern traditional house.” Either way, it’s a capacious and gracious stunner. It’s all “very casual, relaxed, and super-real,” says Hollis, who worked closely with the client to stitch the sprawling residence together decoratively. The mode is more refined in the wing housing the master suite, its bathroom lined in luxe Calacatta gold marble. Read more 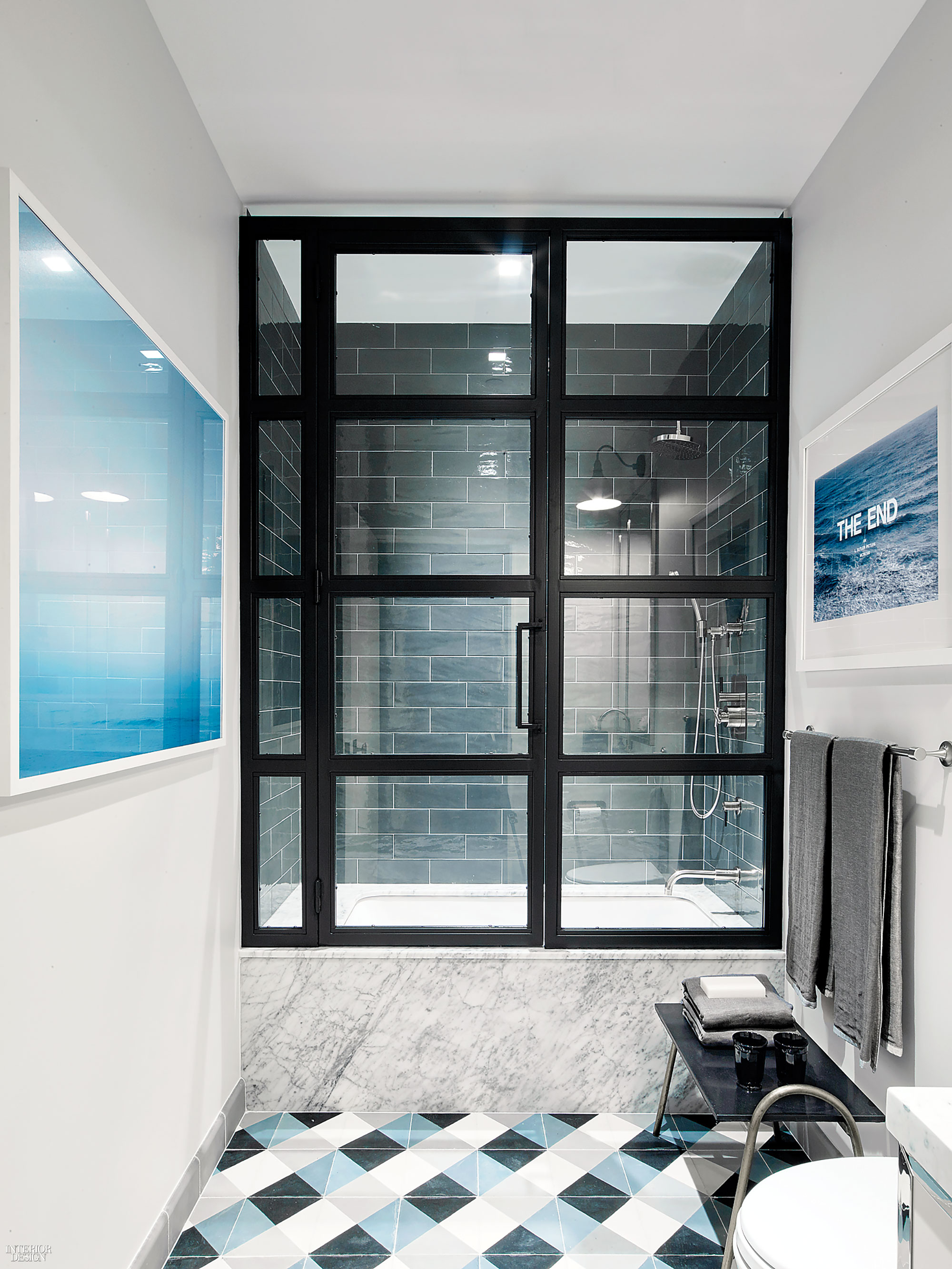 Interior Design Hall of Fame member Mark Zeff is, in a word, decisive: a creative who makes up his mind lickety-split and likes to keep things moving forward. As it turned out, so was the Miami-based client who hired Zeff to design her New York pied-à-terre. The loft is both fun and functional, designed to accommodate the rhythms and rituals of daily family life. A glass door framed in hot-rolled steel encloses the shower. Read more 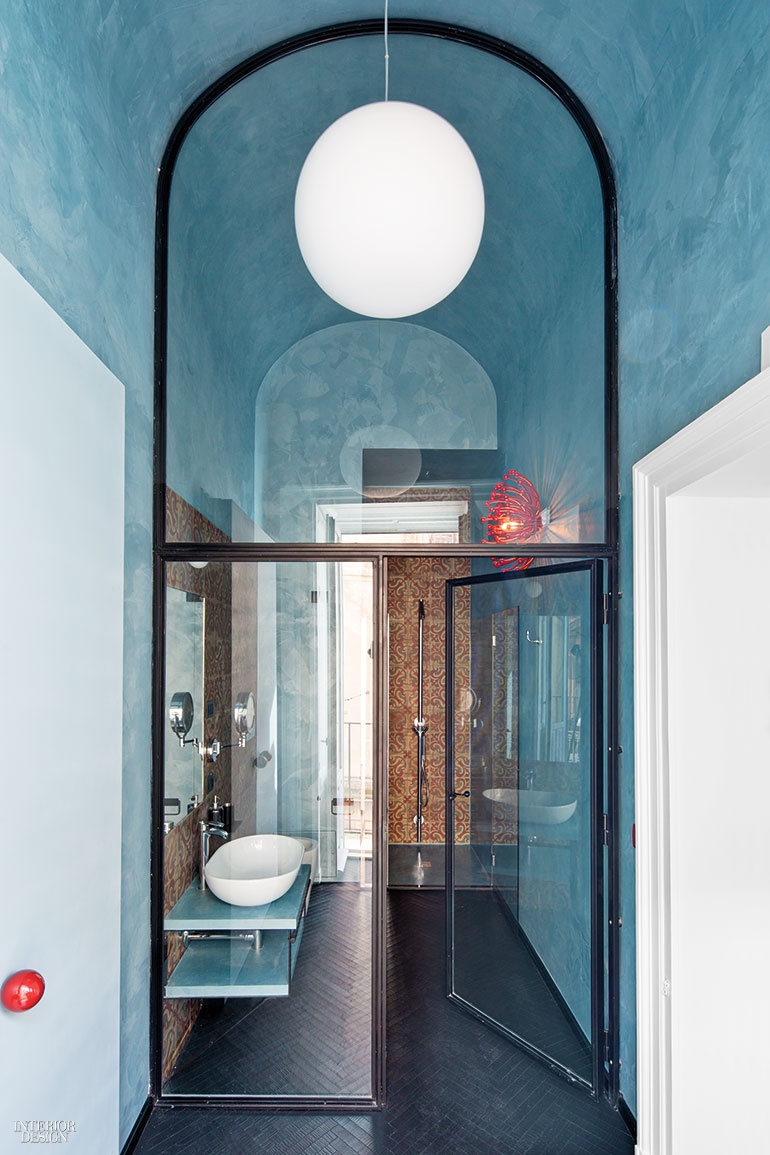 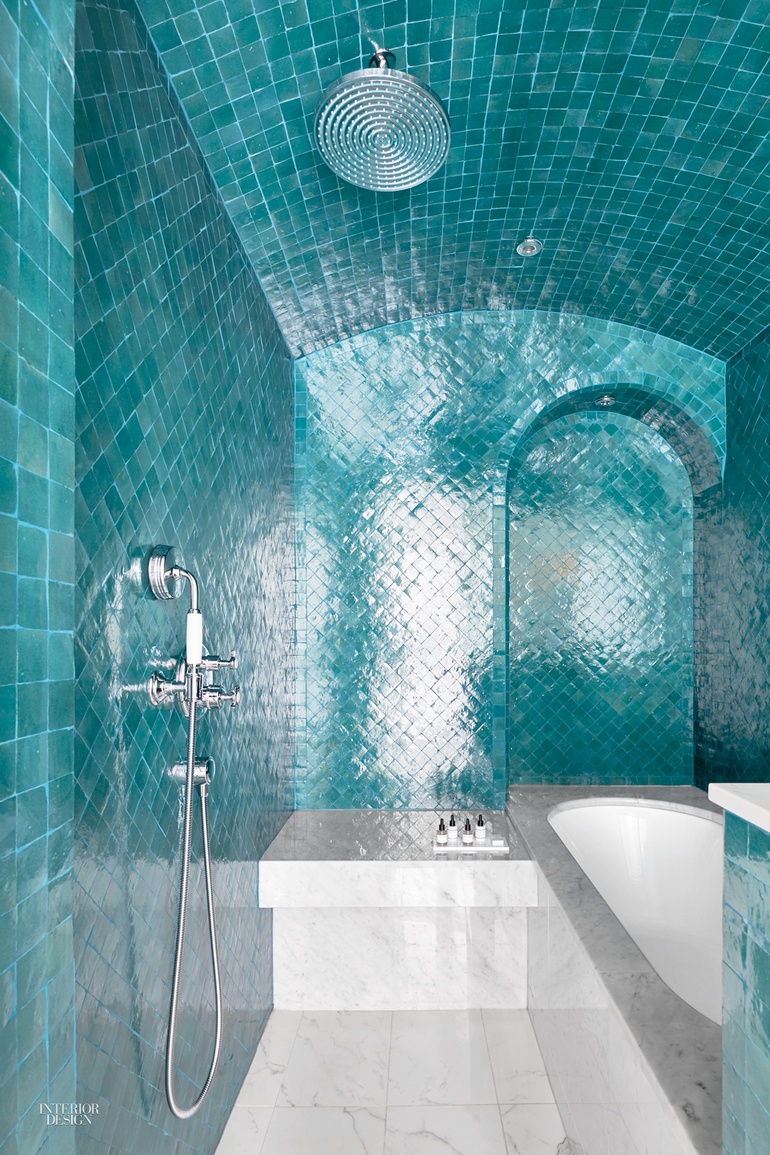 Maison Sarah Lavoine’s first hotel, around the corner from the studio, is all moody color and Gallic charm, especially the oculus-lit brasserie dotted with velvety chairs. An overhead shower finishes off the shower-tub hybrid. Tile and color-matched grout evoke the ocean. Read more 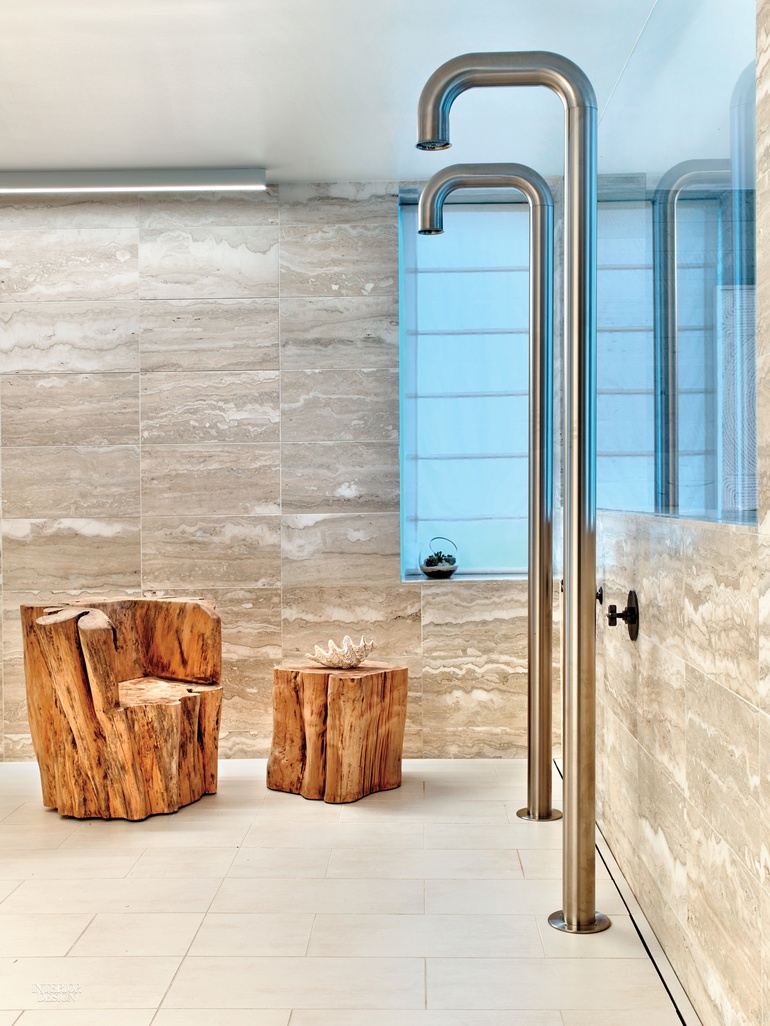 For the long, rectangular plan of this presidential suite, Meyer Davis Studio prioritized private quarters, particularly the bedroom and adjacent sitting area, which get the direct ocean frontage. Even as you shower, you have an oblique view of the waves, a touch intended to give this suite appeal for seen-it-all guests. In the bathroom, a striking, gnarly tamarind-root chair and stump table could make a guest feel like a happy tree-house dweller—eco chic meets Ewok chic. Read more

14. For a Danish Beach House, Jan Henrik Jansen Comes ‘Round to a New Strain of Modernism 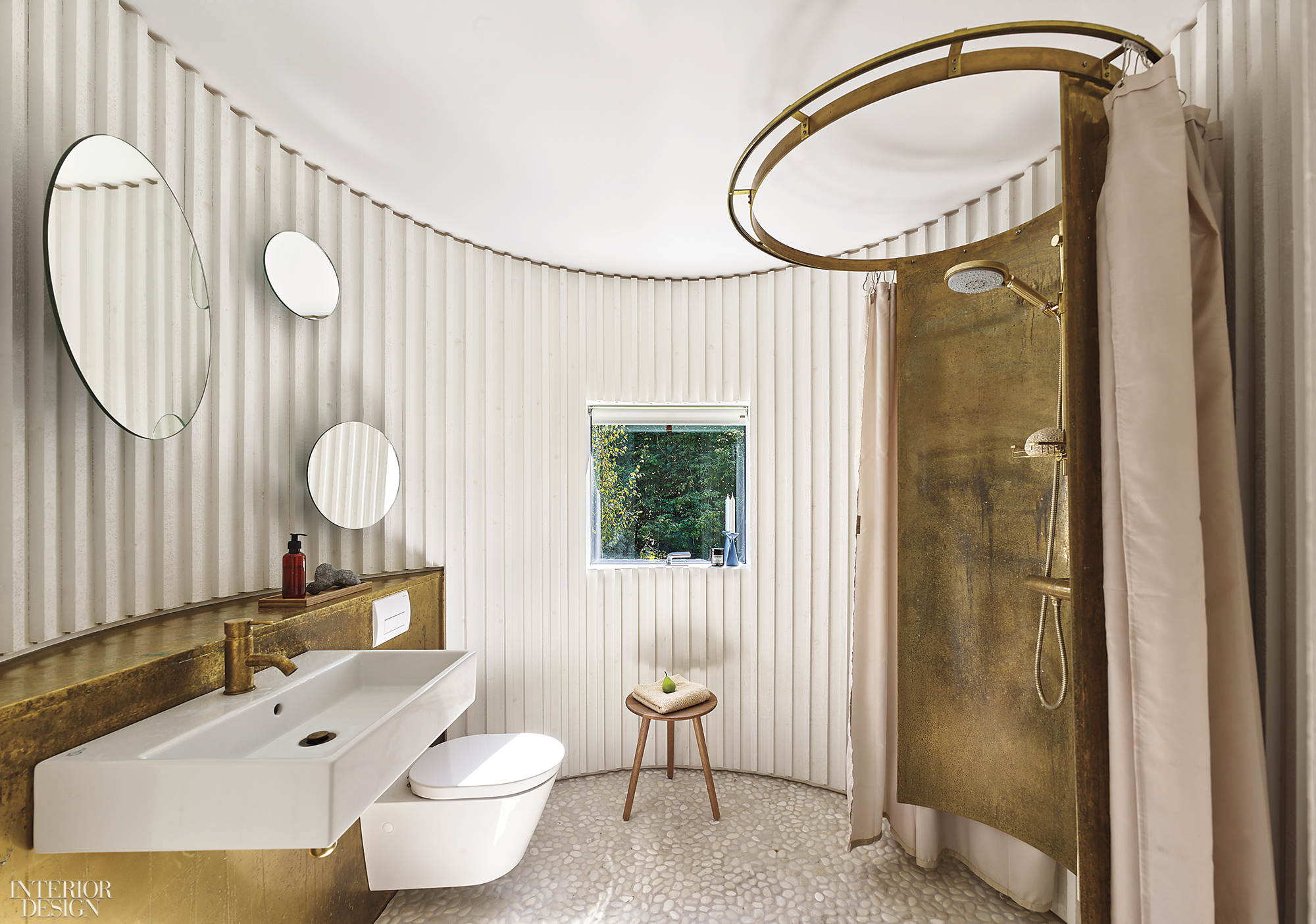 Tucked in a thicket of birch trees on the Danish isle of Møn sits a summer cottage best described as a modernist hobbit hole. A cluster of cylindrical modules clad in slim spruce trunks, the structure wouldn’t be out of place in a fairy tale. It’s a house of charming contradictions whereby the rough-hewn exterior belies the precise detailing and sparseness within. Brass sheathes the custom wood-frame vanity; the brass shower screen is custom too. Read more 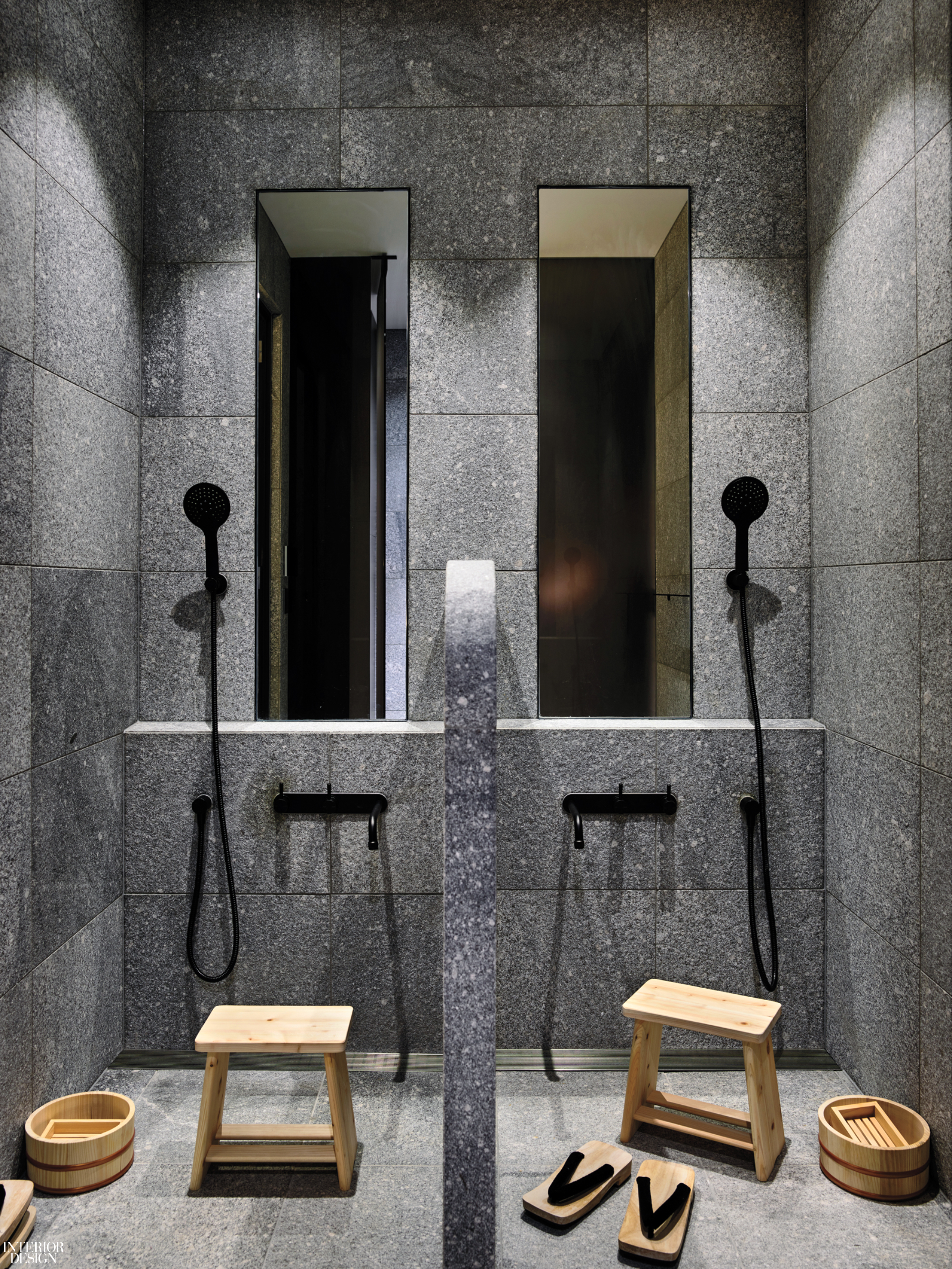 B.E Architecture was asked to renovate a two-story row house flanking a leafy Victorian park of great charm and historical significance in central Melbourne. Rather than evoking the 19th century, the elongated open plan, carefully judged massing, and materials palette recall the works of 20th-century modernism. Brushed granite lines a Japanese-style onsen for washing off before entering the adjacent the steam room. Read more

16. An Artsy Sag Harbor Retreat by Groves & Co. Is All About the Mix 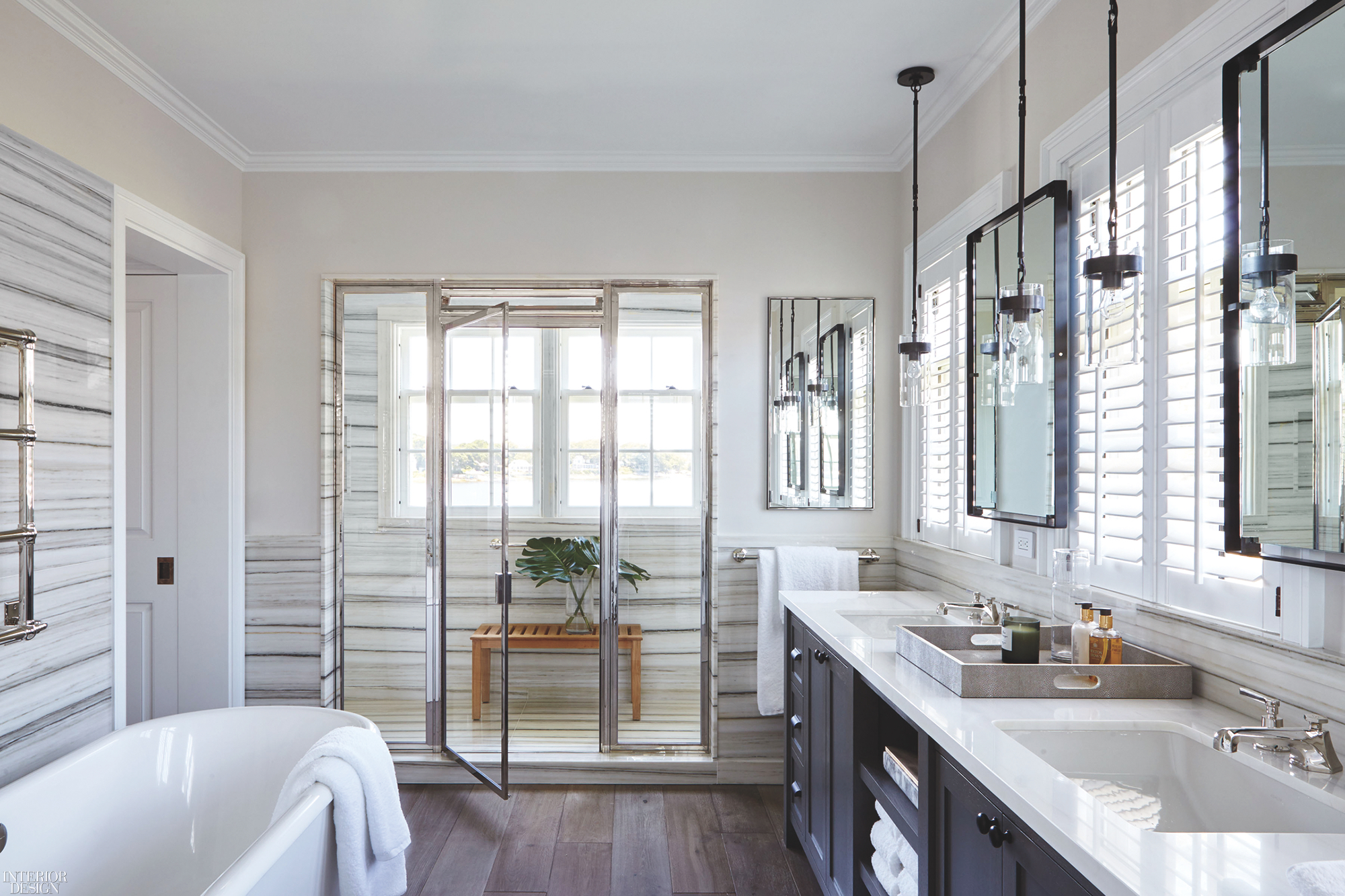 This being a coastal property, the interior views have stiff competition from Mother Nature. Groves & Co. designed the house so the water would be visible—albeit through an enfilade of rooms—right as guests step into the entrance hall. To heighten the indoor/outdoor connection, most window treatments are simple oyster-hued sheers, although shutters modulate the light in the ground-floor study and the Linac marble–clad master bath above it. Read more 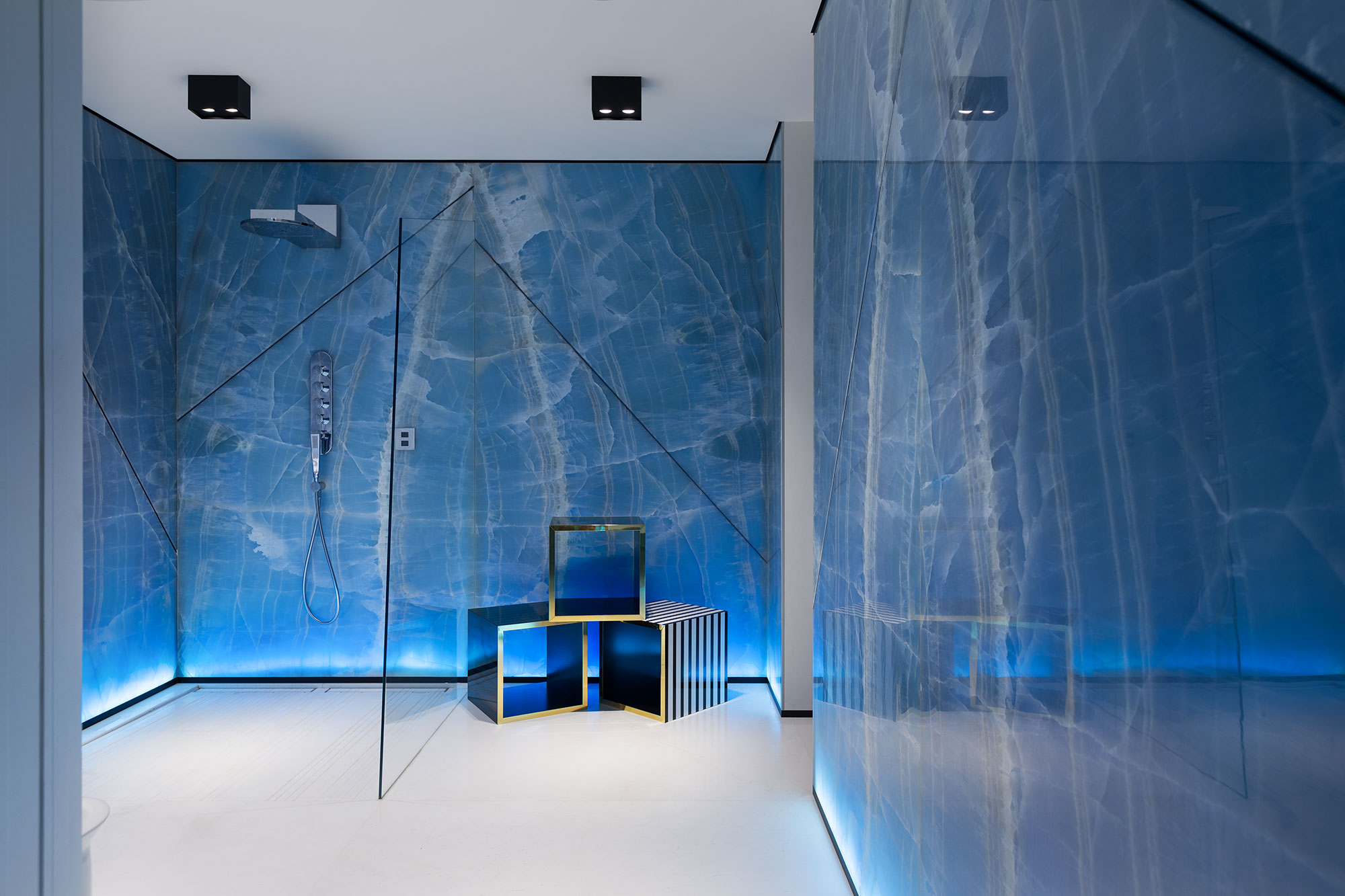 An accent wall is one thing, but for a 2,200-square-foot apartment in Kiev, Ukraine, designer Yuriy Zimenko devised full accent rooms, devoting each area to a study in shades—from a master bedroom in a bold purple to bathrooms of red, green, or blue. Walls of blue onyx marble surround a shower with fittings by Gessi and storage cubes by Roche Bobois. Read more 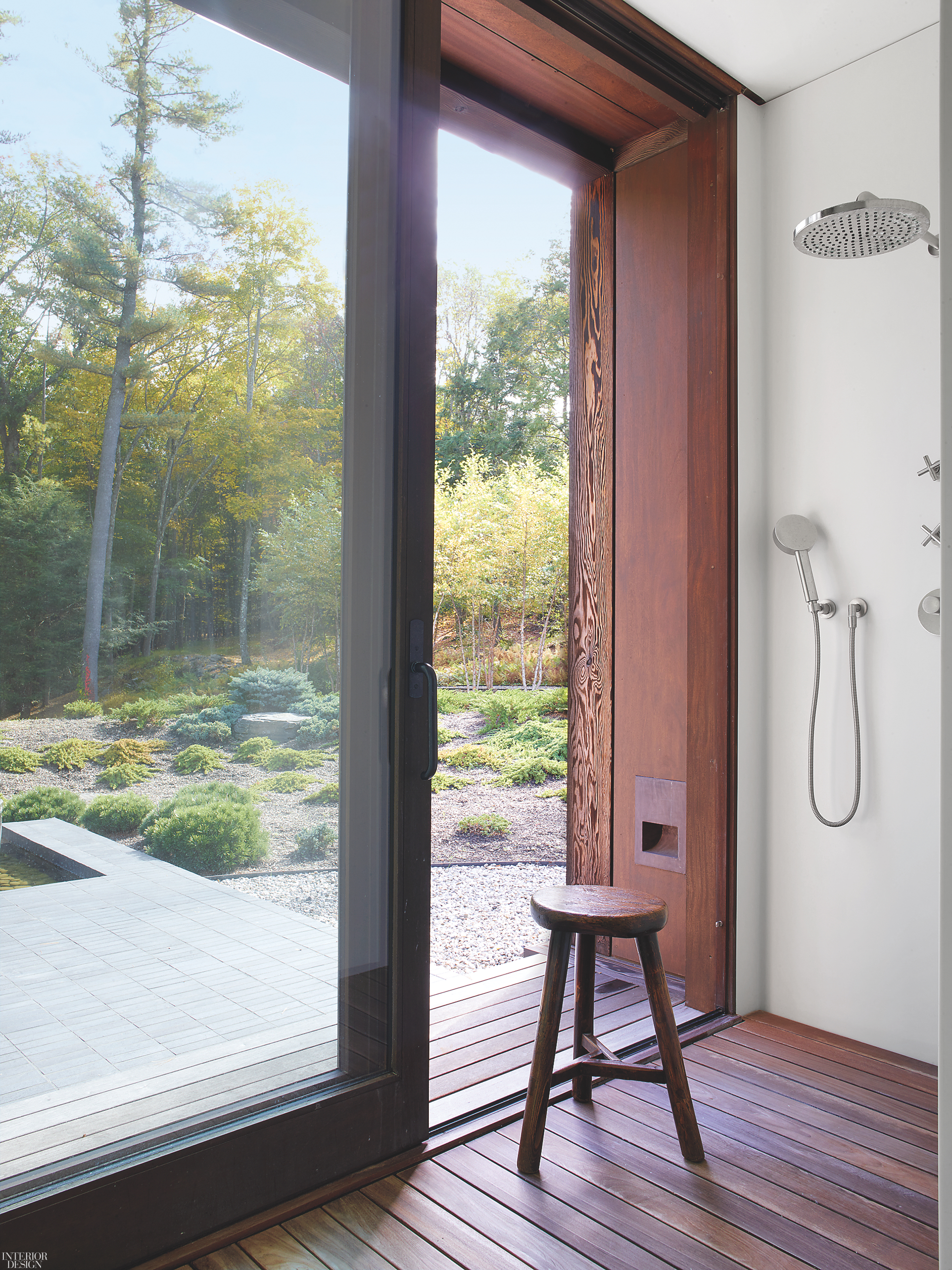 In Japan, the ritual of bathing is less about hygiene per se than it is about relaxation, with nature ideally playing a starring role—as it does at an Asian-influenced master suite in Pound Ridge, New York. Interior Design Hall of Fame members Calvin Tsao and Zack McKown describe their concept as “outside in and inside out.” An elm farm stool in the shower dates from China’s Qing Dynasty. Read more 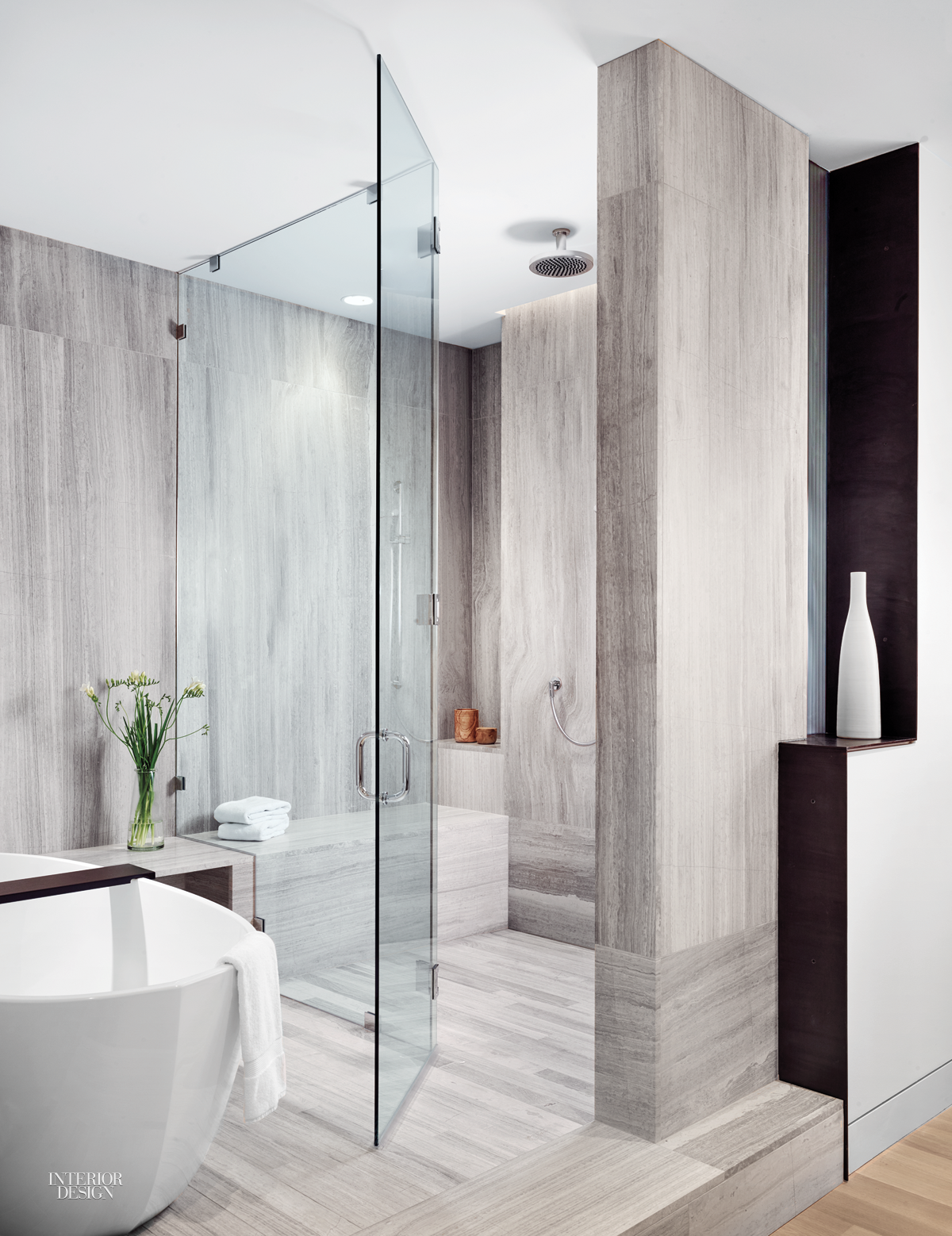 Part of the Residences at W Austin, located in a clean-lined high-rise by Andersson-Wise Architects, this unit was transformed, keeping with the owner's tastes—which lean mid-century though “not off-the-shelf.” Page Southerland Page and Furman + Keil Architects gravitated toward a materials palette influenced by Carlo Scarpa. Read more 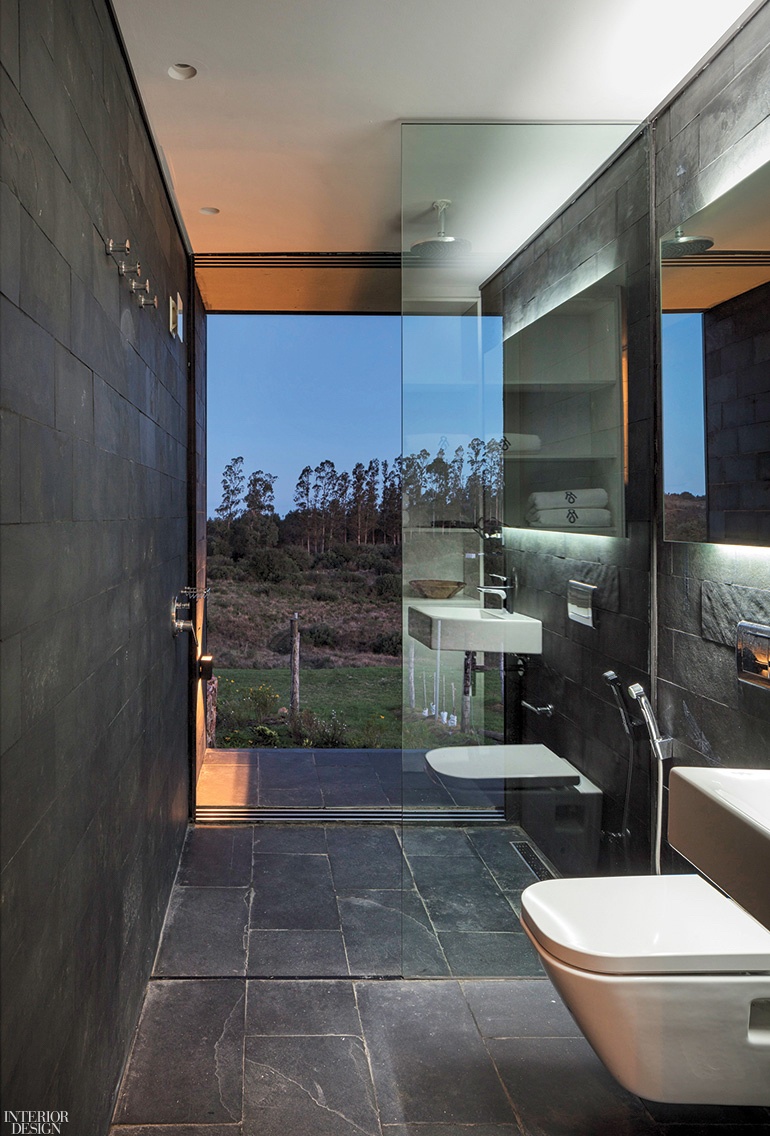