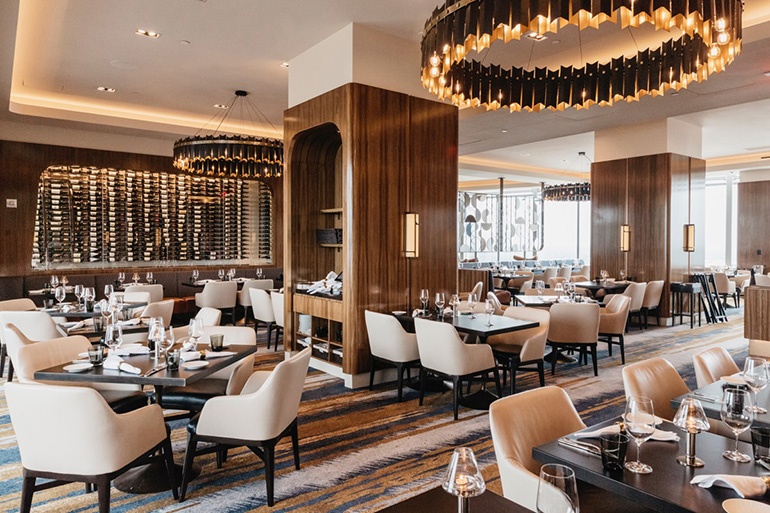 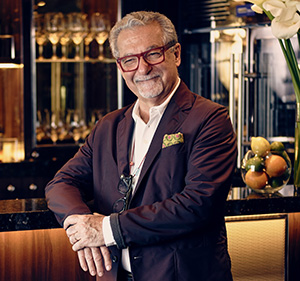 Timelessness makes a successful hospitality project, according to Adam D. Tihany. Principal of the namesake New York design firm he founded in 1978, Tihany is known for hospitality projects that are just that—from the Aleph Rome Hotel to The Breakers Palm Beach Resort in Florida. What some might not know, though, is that Tihany is also a leading name in the cruise ship industry. With 12 of those projects under his belt, he currently holds the position of creative director for two cruise ship lines, Costa Cruises and Cunard. Most recently, in collaboration with architect Bjorn Storbraaten, founding partner of Norwegian design firm YSA Design, Tihany completed the interior design of Holland America’s newest Pinnacle Class ship Nieuw Statendam. And a tour of the the 99,500-gross-ton sister ship to Koningsdam, reveals an astonishing amount of art. Interior Design sat down with Tihany to hear more about how these sea-going giants are becoming unexpected hotbeds of art, what is particularly challenging when designing for sea versus land, and what new European concert hall leaves him awe-struck.

Interior Design: Holland America’s new Nieuw Statendam recently celebrated its maiden voyage. Can you tell us a bit about your overall design theme?

Adam Tihany: For both Koningsdam and Nieuw Statendam, the theme was “the architecture of music.” It’s not really in your face, and a little lofty—a story somebody has to tell you. When you stand on the dance floor of the Queen’s Lounge nightclub, I wanted to evoke a feeling like you're inside a violin, so the large, double-height space has a violin-shaped ceiling cutout. Then, on deck one, when you look up through the three-deck-high central atrium, I wanted you to hear the music, the strings of the harp. Typically atriums like this have a chandelier in the middle, but I designed Harps, a massive 15,000-pound stainless-steel sculpture that wraps the entire atrium.

ID: We understand both Koningsdam and Nieuw Statendam have 240 artists represented on board, in both a dedicated gallery space and in public areas.

AT: We worked with curators ArtLink, and they really picked up on the music theme and ran with it. Some of the pieces have to do with conceptual music—such as a sculpture by Dutch artist Peter Gentenaar which could be a sound wave. Others are more literal.

ID: How did you get into cruise ship design?

AT: I started with specific areas of a ship and not the whole vessel. My first ever maritime project was Disney Wonder, the first Disney Cruise Line ship. I designed the main lobby, the restaurant Triton’s, and the Promenade Lounge. Six or seven years later, I was approached by Celebrity Cruises, and I collaborated with them on their first Solstice class ship, which launched in 2008. I designed the main dining room, and it’s a really iconic space and breakthrough project, as it was conceived as a piece of architecture verses a decorative space. This space received a lot of publicity, as it was something different at sea.

ID: What is particularly challenging when designing for sea verses for land?

AT: Aside from designing for continuous movement, when a parent company such as Holland America Group orders a ship, it's years in advance due to the challenges of getting a slot for production. By the time the first vessel is in operation, the next is well underway. So it's kind of like, what comes first, the chicken or the egg? Tweaking a carpet or a chandelier or a piece of furniture is not that significant, but if you want to change room size or move a kitchen...things become complicated. For the design of the next ship, you make assumptions. Obviously our clients are extremely experienced, so they can already foresee certain things changing—but not everything.

ID: How do you meet the rigorous demands of fireproofing on a cruise ship?

AT: Sure, fireproofing standards are high and elevated at sea—but really they are the same as at a hotel in Las Vegas. Materials have to be rated—but it’s not like you are limited to what you can use. Every major fabric company, carpet company, and furniture manufacturer has certified furniture. You must also only use a certain percentage of real wood—the rest has to be laminated. But we are in 2018. The technology of reproducing things, of making natural-looking materials from fake materials, is astonishing. Unless you are a professional, you can’t tell the difference. I could take you into a cabin and you’d think, Oh this wood is beautiful, I slept for a week in a room made out of gorgeous mahogany, yet there’d be not one inch of mahogany in that cabin.

AT: Seabourn Cruise Line is Carnival’s ultra-luxury brand. Our first Seabourn ship, Encore, launched in January 2017, and, in May 2018, we launched its sister-ship, Ovation. For the first time, we did the entire design of a ship—which is what we really wanted to do from the very beginning. It's a 300-cabin vessel and considered to be in the small-ship cruising category. In terms of scale, it was very manageable for us as it really takes a good chunk of people to tackle a very large vessel, particularly with the rigorous schedule and timing with deliverables. In terms of showing off what we can do with a whole ship, from rooms down to everything, Seabourn is our swan song.

Other key projects from last year were the redesign of Delhi landmark The Oberoi New Delhi and restaurants Novikov Miami and Bourbon Steak Nashville.

AT: We’re about to open The Mandarin Grill + Bar at the new Mandarin Oriental Wangfujing Beijing. The restaurant is a contemporary take on the traditional Chinese steakhouse showcasing a rich color palette and intricate brass detailing.

Renovation is underway on two historic properties, the iconic 55-year-old Space Needle restaurant in Seattle and The Breakers Palm Beach Resort in Florida, which originally opened in 1896. We’re also working on restaurant Vernick Fish at Four Seasons Philadelphia, opening this spring, and on an entire hotel in Istanbul scheduled for 2020.

In terms of products, I recently launched Tihany Product Design, which has led to number of unique collaborations beginning with the Space lamp produced by Kartell. We’re looking forward to the introduction of more TPD products later this year.

ID: Can you name a person in the industry that you particularly admire?

AT: I have three: Luis Barragan for his architecture of color, Gio Ponti for his imagination and style, and Renzo Mongiardino for his craftsmanship.

ID: Do you have a favorite building?

AT: Right now it’s Herzog & de Meuron’s Elbphilarmonie & Laeiszhalle in Hamburg, Germany. Every now and then there is a building that comes along that defines a city. In this case, the location, the content, and the design perfectly sum up the ethos of Hamburg.

ID: Do you have a secret destination you can share?

AT: I am no fan of hunting, or nature, for that matter. But, when in Paris, I always stop at the Musée de la Chasse et de la Nature in the Marais district, which has two historic mansions filled with paintings on these two themes, as well as hunting weapons and exotic stuffed animals from around the world.