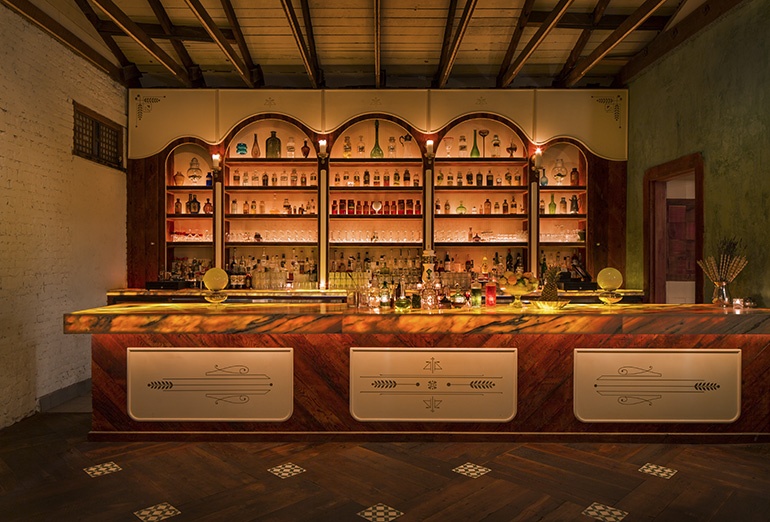 Ever on the hunt for the coolest drinking establishment in the most out-of-the-way location, Los Angeles’s lucky and intrepid will soon discover Apotheke. It’s deep in east Chinatown, overlooked by a barbed wire fence and a fierce street-art mural. Outside, the 1930s structure is freshly painted white brick. Inside, comes the surprise: an environment that could double as a Wes Anderson set. Though not quite the Grand Budapest Hotel, the mise-en-scène decidedly derives from a vintage Austrian apothecary as does its New York predecessor. Christopher Tierney, owner and designer of both, acknowledges the cinematic influence.

“It was a pigeon coop, derelict for almost seven years,” he says of the site at discovery. Tierney chose to view it as “a diamond in the rough.” In other words, the perfect setting for a three-year adventure of design, fabrication, and hands-on maker work replicating some New York elements to build the brand.

Key was the illuminated bar. Tierney managed to find the same rosa aurora marble from a Portuguese quarry and built the piece to weave both inside and outside on a homey patio, this being LA of course. For the building’s envelope, he created chevron-patterned flooring of reclaimed pine inset with encaustic cement tiles. Some walls are burnished plaster, “a homemade recipe,” on which Tierney painted murals himself. Elsewhere, they are paneled with more of that pine or upholstered with fabric that looks like it survived the Austro-Hungarian empire. Meanwhile, an embroidered fabric found in a DTLA alley shop lines the wall to the restrooms, the women’s space glamorous in hot pink. The building’s main asset was its double-gable ceiling. Tierney gilded the underside of beams and whitewashed the structure above.

When it comes to furnishings, it’s hard to pick the one wow factor. Could it be the actual Biedermeier settee, subsequent inspiration for the mattress-ticking banquettes? How about sconces that look as if they are fashioned from a chemistry set, their beakers full of absinthe-colored liquid? Our bet would have to be the Murano chandelier. More than three feet tall and dating to the 1960s, it was, Tierney tells us, originally commissioned for a Milan hotel.

What’s next? Not another location but a related entrepreneurial endeavor. Tierney is developing a line of medicinal bitters for “boutique” mixologists. The potions can either enhance boozy cocktails, such as Apotheke’s Dizzy Intellect or Angelino’s Way, or help cure the after effects of a few too many.