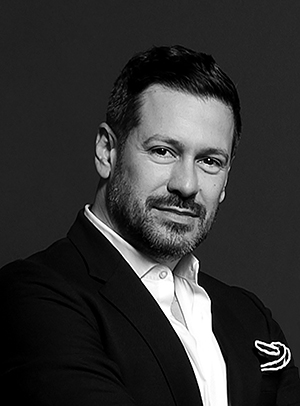 William Harris has what he calls “a regular crash pad” in Bangkok—both for love of the city and work. At the time of our interview in Thailand’s capital, AvroKO, the design and concept firm Harris founded with fellow principals Kristina O'Neal, Adam Farmerie, and Greg Bradshaw, had just wrapped up a restaurant and two bars on the top floors of the Waldorf Astoria Bangkok, the Hilton-owned Waldorf Astoria Hotels & Resorts’ first venture into Southeast Asia. To better reach its increasingly high-profile Asia projects (Harris is, in fact, fresh from “kicking the tires” at another AvroKO project, the newly rebranded and renovated Eaton Hong Kong), AvroKO also has a Bangkok outpost in addition to those in New York, London, and San Francisco.  “I can’t say I ever fully lived here, but I’ve been coming out probably every six to eight weeks for the past 10 years,” the designer says. And he has his favorite places, which include an Art Deco bar with sweeping views of Bangkok’s skyline, a restaurant known for its delicious offal, and the former residence of an international man of mystery. Here are Harris’s eight top design destinations in Bangkok.

Of course, first we have the spaces we designed in the Waldorf Astoria Bangkok: The Bull & Bear restaurant, The Loft bar, and The Champagne Bar. They are on the top three floors and connected by their own brass, wrought-iron and marble grand staircase. Of the furnishings, there are a few antiques and vintage furniture pieces, but 95 percent we custom-designed. A chandelier in the Bull & Bear has over 800 hand-molded glass feathers and carved wooden serpent-like shapes—that’s the giant birdlike Garuda and the snakelike Naga, two mythical beasts always in conflict. Michele, the bar manager at The Loft, does a low-alcohol martini that is simply delicious and not to miss.

This is my favorite restaurant right now. It’s in a simple yet beautiful terrazzo-filled space in a back alley of Bangkok’s Chinatown, which runs along Yaowarat Road from Odeon Circle in Charoenkrung. This modern izakaya (a Japanese gastropub) was created by an editorial photographer along with a very talented chef formerly of high-profile places such as Bangkok’s Ku De Ta (now Cé La Vi). Yes, it’s Americans doing Japanese food, but so very elegantly done. Jua is known for its offal and that’s what I order—chicken gizzards, liver, heart, all grilled—and these Japanese flavors just pop in your mouth. They also have this amazing tomato dish—just a tiny salad with shiso pesto, goat cheese, and wasabi—but so unique. I’ve never been so excited to eat vegetables.

H Gallery, located in a beautiful old mansion in the Bang Rak district, has an eclectic mix of young Thai and Asian artists. The work is all contemporary and the space often features unique installations and creative juxtapositions of work. The staff is friendly and knowledgeable and it’s always pleasure to pop in.

switching over to #bangkok for now - the second stop of my city-hopping trip through asia. a place like no other i’ve seen before. so buzzing, so packed with people, cars and motorbikes, but on the other hand so many interesting details, that you can find everywhere you walk on the streets. one of my favourite parts of the city was china town and that’s also were i took this picture.

The building facades in Bangkok’s Chinatown http://www.bangkok.com/chinatown are a design-lovers’ dream. There are amazing architectural examples remaining from the mid-century through the 1960s and 70s. From old theaters to municipal buildings to apartment complexes, the vast tapestry of patterns, colors, and design is mesmerizing. Grab a bottle of water and just start wandering. Some of my favorite aspects are the mammoth vintage signage relics, which have been out of commission for decades but still retain incredible detailing and presence. I just hope that with the inevitable march of gentrification that these gems will be restored and not simply demolished.

This inspiring design studio and showroom on Thanon Charoen Krung road focuses on gorgeously hand-crafted tables from antique or reclaimed wood, in addition to very high-quality metal bases and upholstered furniture. They use old- world, laborious techniques and their love of craft is evident. Across the street they have a warehouse chock-full of the most magnificent and massive antique slabs of wood. It’s a maker’s heaven.

Before mysteriously vanishing in the Malay jungle in 1967, American expat Jim Thompson was an architect, world-class bon vivant, CIA operative and the person who took Thai silk to the editor of Vogue and transformed it into a global industry. His house has been left exactly as it was and is a sexy testament to his years of living dangerously. #jimthompsonhouse #bangkok #thailand????????

This is the former residence of international man of mystery, silk entrepreneur, and suspected CIA operative Jim Thompson. He had impeccable taste and a high regard for traditional Thai artistry. His home is a reflection of that, and an untouched glimpse into what beautiful (and yes, affluent) Thai residential living was like in the 1960s. Now it’s a museum open to the public — but walking around feels simply like one is a guest in his home and not the least bit stuffy.

I’m a huge fan of Bill Bensley, and one of the best hotels I’ve ever been to is the Siam Hotel, which he designed, on the Chao Phraya river. The owner purchased and restored three traditional teakwood houses on stilts, originally built and owned by Jim Thompson, and incorporated them into the food and beverage areas. The rest is a stunningly beautiful modern structure with Thai sensibility and a fantastic art collection from the owner. It’s a beautiful example of old world meeting new.

Who's ready for #chatuchakmarket this weekend? Get all the info you need right here: http://bit.ly/2kD5X7M

I love the sprawling Chatuchak Weekend Market for its vintage finds and really quite bizarre furniture. There’s everything from food and lighting to fashion, art, and even pets. One could spend hours searching through the mazes of unique stalls hunting for that perfect treasure. Actually, there’s these turtles I’ve been eyeing...