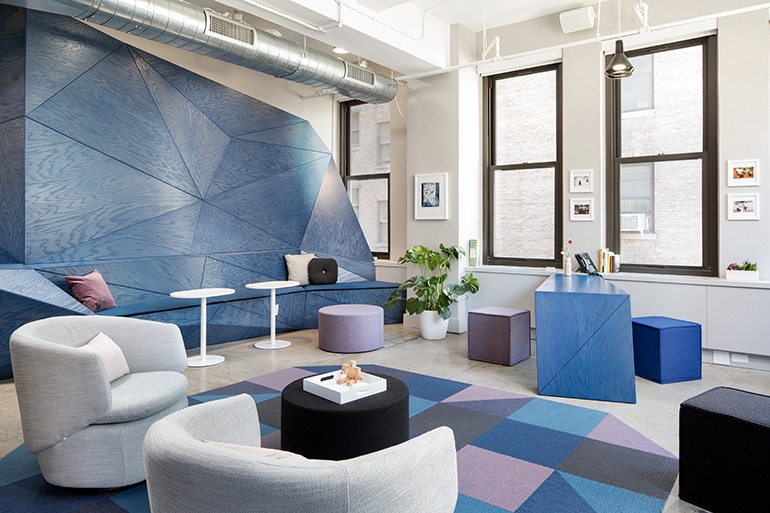 When audio agency Sonic Union’s squad of sound designers, engineers, creative producers, and composers grew out of their first “playground” in Union Square, New York, soundproof spaces with a loud identity were a must.

Enter Revamp Interior Design, whose co-founders and principals Cece Stelljes and Danielle Fennoy loved the faceted, bright blue plywood cladding that RAW-NYC’s Raya Ani had planned for the 3,000-square-foot space just off Bryant Park. “We added custom felt seat cushions and colorful throw pillows to the origami benches,” Stelljes says, along with loose seating, tables, and carpet tiles that “would complement, not compete, with this architectural feature. Some finishes were chosen to act as neutral backdrops, and others to augment the blue, angular shapes.”

Within each of the four studios and three vocal booths, she notes, “every wall and ceiling surface is covered in a wall-to-wall stretched fabric acoustical track system—which meant we could not hang art, shelving, or any décor on the walls.” Sounds like a challenge, but the team relied on plastic films in bright fuchsia, sunny yellow tiles, and a medley of accessories that is music to our ears.