Manhattan Restaurants Serve up a Tasting Menu of Creativity

New Yorkers have an enormous appetite for change. Luckily, the pace of closings and openings makes work for designers. Consider the case of Bentel & Bentel, which just published two decades of local jobs in the monograph Nourishing the Senses: Restaurant Architecture of Bentel & Bentel. They include Gramercy Tavern from 1994 and, at the Museum of Modern Art, 2006’s the Modern—culinary landmarks that survive miraculously intact. The firm pioneered an 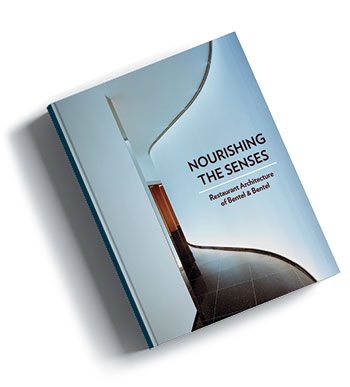 approach that was upscale without requiring diners “to sit up too straight at the table,” Carol Bentel explains. Converting various retail spaces into restaurants, the Bentels learned how important first impressions are to New Yorkers. Existing storefront windows serve up inviting scenes to passersby on the sidewalk. “Dining becomes an urban experience,” Peter Bentel says.

Interior Design Hall of Fame member David Rockwell hasn’t been blessed with history at the Moxy Chelsea. Actually located in the flower district, this outpost of an upstart Marriott International brand is opening in a glassy new tower. So Rockwell Group has had to simulate the historicism theatrically. (This fortunately comes naturally to Rockwell, a Tony Award winner who is currently designing several Broadway stage sets.)

Moxy’s café promises to be a tropical fantasy, with a retro pastry case and marble flooring in perky shades of pink and green that would feel right at home in Miami. “I think of restaurants as two-hour mini vacations,” Rockwell says.

As Paul Bentel notes, “The dream is to rent a space, put in a stove, add a few tables and chairs, and start serving food.” Woods Bagot’s Manhatta—the latest from Danny Meyer’s Union Square Hospitality Group—elevates that hipster fantasy to the unlikeliest of heights: 800 feet up at 28 Liberty Street, the sleek 1961 office tower in the financial district by Gordon Bunshaft of Skidmore, Owings & Merrill.

While the windows frame helicopter views of the neighborhood’s skyscrapers, the restaurant name was adapted from an ode to a much earlier Gotham, a Walt Whitman poem called “Mannahatta.” And the decor is appropriately nostalgic. “It isn’t glitz and glam and glass and brass,” principal Wade Little says. Table bases are black iron and Vilhelm Wohlert’s 1958 Louisiana chairs would not look at all out of place at a Brooklyn steak house.

For brass of a hyper-local sort, Glen Coben of Glen & Company harvested buttons from vintage City of New York Police Department uniforms to use as tufting on banquettes at Carbone, a red-sauce Italian joint in Greenwich Village. Coben went much more international in Midtown at Gabriel Kreuther, where the mix-and-match wall coverings recall chef Kreuther’s childhood in the Alsace region of France. 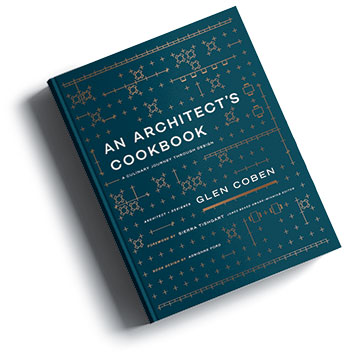 “To discover a restaurant’s soul, I ask chefs about the dish that best represents them,” he explains over pastrami tacos at chef Alex Stupak’s Empellón. Curved balconies and overscale floor tile give a Mexican courtyard feeling to this two-story Midtown space. It’s a standout in An Architect’s Cookbook: A Culinary Journey Through Design, in which beauty shots of Coben’s interior appear alongside Stupak’s recipe for guacamole.

Meanwhile, a failed Mexican place in the East Village has been taken over by a chef friend of mine, who asked for my help reinventing it as modern Asian. Out went cheap patterned wall tile, miles of LED strip lights, and cartons of expired eggs. We kept going until we had essentially an empty box with freshly primed brick walls.

While there’s no consensus yet on a name for my friend’s forthcoming restaurant, we have agreed to order natural-oak side chairs by Raffaella Mangiarotti and Ilkka Suppanen for the Finnish company Woodnotes. They won’t arrive for a while, but we’ve resigned ourselves to the fact that no New York restaurant worth its salt is built in a “New York minute.”