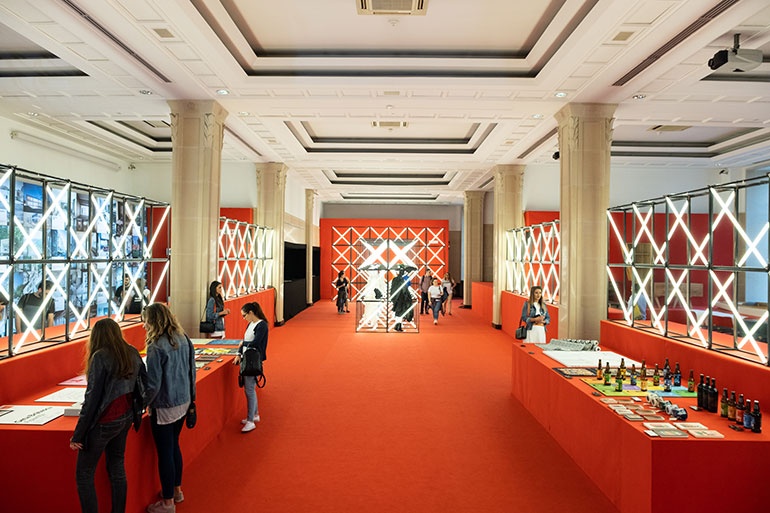 Bucharest’s sixth Romanian Design Week was a 10-day long celebration of architecture, urbanism, interior design, graphic design, illustration, fashion design, and product design. In the city’s iconic Telephone Palace, some 150 projects were displayed that had been selected by a creative board from over 400 submissions. Mihai Gurei, who owns a contemporary design store in Bucharest, curates the product design section of the show and speaks of a growing awareness of what design means in Bucharest and elsewhere in the country. “Before Romanian Design Week started, there was a big misconception about the word design," Gurei says. "People thought it was something that you added to a product in order to increase its price. Now people are starting to understand that it’s about the thinking, the narrative, and the manufacturing process behind the object.”

This year also marked the coming to life of the city’s new Creative Quarter after its launch last year. A project to map and promote the city’s central cultural spaces, design studios, creative workshops, and stores, it came to life during RDW with a series of talks and street food stalls and further exhibitions in the restored Palace, a former newspaper building turned into creative industries co-working space and hub.

Here, we share emerging design talents that caught our eye during the fair.

One of Romania’s most promising designers, Radu Abraham collaborated on Contrasts, a collection of brass, copper, and wood vases and trays made in collaboration with Mesteshukar ButiQ (MBQ), a social enterprise that works to bring new value to traditional Roma craftsmanship. Abraham has a love of making and experimenting with his hands. “I wanted to make pieces that contrasted soft warm materials with cold hard ones, and smooth or sanded surfaces with rougher textures of beaten metal.” For him, the shapes and volumes are “totemic and a bit primitive but also very utilitarian and contemporary.”

Founded in 2014 by manufacturer and entrepreneur Robert Savu and architect and designer Dragos Motica, Ubikubi seeks to foster and showcase new Romanian design and local manufacturing capabilities. At RDW it showed several products that displayed an interest in honest contemporary and accessible design that transcends specialized audiences. One of the most captivating was 1989, a water carafe and glasses designed by that referenced the form of the returnable milk bottle used during Communist times in Romania. Another collection, Chipped, was a minimal set of plates with an unusual incision on the edge intended to support the cutlery.

is a design lab founded by Patricia Erimescu and Alexandru Barbu focused on recycling, the circular economy, and responsible design. The carpet shown at RDW is made out of jute, a product that is locally made but not popular anymore. and Barbu managed to salvage the material from a factory that was closing down and make this hand-woven carpet. Its different sections, asymmetrical compositions, and varied tactilities and textures are a melancholic tribute to an oft-sidelined fabric in design and slowly disappearing material and craft.

A ceramics design studio founded in 2010 by Andreea Lazarescu and Tiberiu Dancila, Ceramic Sparrow design and produce decorative and household objects inspired by modernism and the artistic and architectural movements of the early 20th century—spearheaded by figures such as Josef Hoffmann, William Morris Masahiro Mori. At RDW they showed Malevich, a teapot and cups that play with straight and curved planes, angular edges, and rounded symmetries. The duo also launched Edelweiss, a striking geometric satin-finish desk/table lamp made entirely out of porcelain and inspired by Villa Malaparte and Zaha Hadid’s Messner Mountain Museum.

Bogdan Ciocodeica founded his Bucharest-based architecture practice in 2015 and is responsible for some of the most interesting and eclectic interiors that have opened in the last couple of years in the Romanian capital. New openings by the designer include the intimate Koketerie Bistro on Bucharest’s best-known street Calea Victoriei, the Mikkeller beer bar and bistro in a beautiful early villa, and the monochrome and minimalist Entrance Store fashion boutique—replete with striking black-painted steel-framed glass display cases and mirrors designed by Ciocodeica himself. All were displayed in RDW’s main exhibition space.