In light of Arizona-based artist Matt Magee’s recent win of the Arlene and Mort Scult Award and current exhibition at the Phoenix Art Museum, it might be time to embrace that old saying, “less is more.” With a diverse body of work rooted in simple textures and grid-based compositions, Magee is a master of his genre. His work is included in the permanent collections of the Museum of Fine Arts Houston, the Josef and Anni Albers Foundation, and the University of New Mexico Museum. Recently, he talked to Interior Design about his process and inspirations. 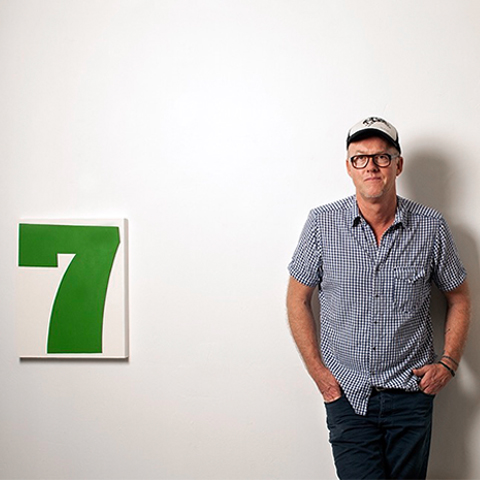 ID: What are you presenting at the Phoenix Art Museum show?

Magee: We're showing paintings from the past two years and a large group of found-object sculptures titled Prima Materia that I've been making since the late 1970's. There will be a variety of small sculptures made from cut-up detergent bottles and a large hanging banner, also made from cut purple detergent bottles, titled Purple Rain. The largest painting in the show is a diptych titled Star Map 1 & 2 and the imagery relates to an ongoing series of work hinged on a grid from Agnes Martin's On a Clear Day screen print. Her edition is a meditation on the grid in 30 different formats and I've filled in her simple matrix with my own system of shapes and forms, which look like some kind of Morse code or 21st-century language.

Interior Design: Can you talk a bit about how your art has grown since you started out, and why you’ve taken it in the direction you have?

Matt Magee: Since the late 1970's I've used found materials in my studio practice. I continue to work with rubber, aluminum cans, and detergent bottles, though I have become as much a painter, photographer, and printmaker as a sculptor now. Since moving to the southwest in 2012 after 30 years in Brooklyn and Manhattan, the paintings have taken on a more minimal and linguistic sense inspired by the austerity of the desert landscape—moonrises and sunsets and mountains on distant horizons. I don't feel as rushed living in the southwest, and have much more time for the studio and am able to paint thoughtfully and more slowly here.

ID: What artists and concepts do you find influential?

MM: Mid-20th-century artists like Forrest Bess, Myron Stout and Paul Feeley have all shown me a path forward. I like De Kooning in the late 1930's and Eva Hesse in the late 1960's. Louise Bourgeois has given me permission to explore emotional conditionality. And one of my favorite periods in Chinese art history is 12th-century Song Dynasty landscape painting. Artists like Fan Kuan saw landscape as a blending of male and female elements.

ID: Can you describe your creative process?

MM: I always have a project going in the studio and am always thinking ahead. My iPhone has helped in various ways in that I'm constantly taking photos, some of which end up as paintings. I also have sketchbooks that are filled with thumbnails of hoped-for paintings, some of which succeed, some of which do not. I'm in the studio seven days a week, and because of this there's a fairly constant flow. One day builds on the next.

ID: What relationship does your art have with science and technology?

MM: My father was a career geologist and archaeologist, and I almost became a geologist. Data as presented to a geologist rests in mathematic equation, seismic waves, and natural histories of rocks and the landscape. I've made paintings of seismic waves from memories of working on a seismic crew when I was 20 on the Texas/Mexico border. The waves can be understood as fluid lines of text and information.

ID: What is it like being part of the Cattle Track Arts Compound?

MM: Cattle Track is a cooperative and collaborative artist community. It is a meeting place for artists, locals, and visitors from out of town who all seem to stumble upon this place. My studio here is in a barn with a cement floor that used to house cows and turkeys, and is a far cry from my last studio in Manhattan, a loft in Tribeca. The studio is light-filled and there are two doors, one which opens out into the desert so I hear birds. It feels very natural.

The history of Cattle Track is rich and interesting. Louise Nevelson worked here on a project in the 1960's and the founder of the Phoenix Art Museum, artist Philip Curtis, also lived and worked on the property. Artist Fritz Scholder lived across the street and at one point race car driver Mario Andretti was here building his race cars. If the walls could talk, there would be stories.