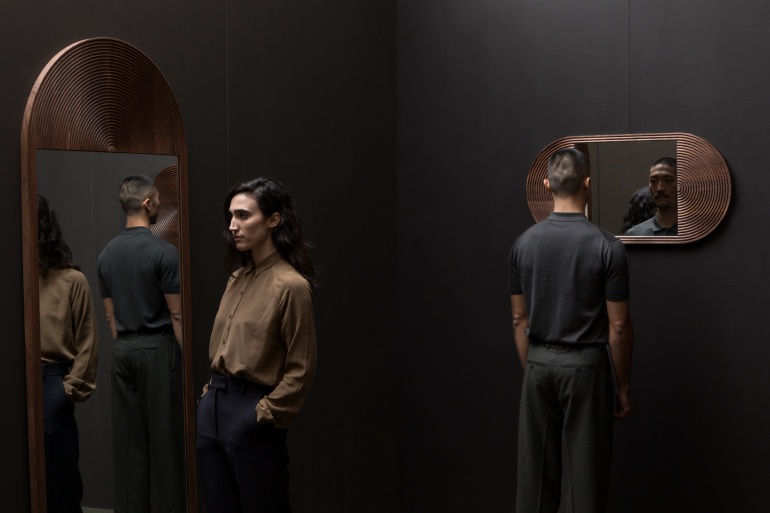 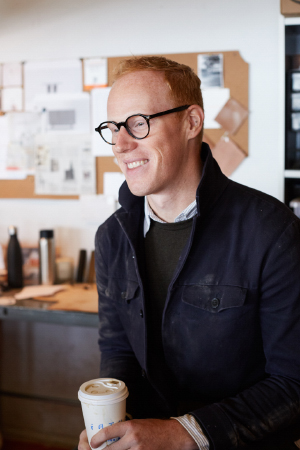 Looking at Coil + Drift’s portfolio of sophisticated objects and furnishings, it’s no surprise that founder John Sorensen-Jolink studied dancing. Each piece, from the gently curved Soren Chair to the brushed brass Bishop Tall Floor Lamp, is inflected with poetic and choreographic elements. Both will display during New York’s Armory Arts Week at Collective Design, where Coil + Drift’s booth, “Unconscious Forms,” is part of Collective Concept. At the fair, he will present an in-booth performance that explores movement among treasured possessions in the privacy of one’s home. (Check it out from 2-3 PM on March 9-11.) The setup, which includes an original short film in collaboration with photographer Charlie Schuck and stylist Natasha Felker, is sure to wow—Coil + Drift received the prestigious ICFF Editors’ Award for Best New Exhibitor in 2016. Sorensen-Jolink sat down with us to explain transitioning from dancing to product design and what it’s like being a maker in Bushwick, Brooklyn.

John Sorensen-Jolink: I grew up in Portland, Oregon, in a very artistic family. My parents encouraged my sister and I to explore many artistic disciplines, from violin to photography to dance. They taught us that with a little focus we could move fluidly between artistic disciplines and they would influence each other in a kind of cross pollination. Today, I allow the knowledge of movement and space I learned from my years as a dancer and choreographer to influence and sometimes even drive my design process.

ID: What galvanized your transition from dancing to product design?

JSJ: I loved dancing but at a certain point, I started craving a less ethereal creative process—something more lasting than an hour-long performance. As a choreographer, you spend months creating a new work. It’s performed a few times and then it’s gone. I wanted to make something I could hold on to and pass along. I also became uncomfortable with the financial realities of being a dancer. I was at the top of my pay scale at 26 years old, and a continued successful career would give me no pay increase. I wanted more growth potential and to be able to dream and set long-term goals.

ID: How does your understanding of spatial awareness from your dancing background inform your approach to product design?

JSJ: At the beginning of my design career, I was very self-conscious that I wasn’t a real designer because I lacked formal training. I was also aware that I was taking skills I learned as a dancer and choreographer and applying them to my design process. I soon realized that applying choreographic concepts like spatial awareness and negative space to design set me apart, so I decided to implement it in a more intentional way.

My first piece along those lines was the Soren chair. I used simple vertical and horizontal planes for the chair and added one major arc for the back rest. It’s a perfect half circle, but my eye sees a full circle—half real and half a reflection of negative space.

ID: Which projects are you most proud of and why?

JSJ: In 2016, Coil + Drift was very young and I was determined to show our latest collection at a big trade show—which I hadn’t done before—on a very limited budget. I got the smallest booth available at ICFF, way in the back. I spent hours laying out the space and could fit all the objects in my car. The second day of the fair, Coil + Drift won the prestigious ICFF Editors’ Award for Best New Exhibitor. You really can’t go wrong doing the absolute best with what you have, even if it seems like you don’t have much.

ID: "Unconscious Forms" touches upon the concept of home and how we move inside ours. What’s your idealized vision of the home?

JSJ: Large interior spaces with clean, clear surfaces and lots of light. It terms of clear surfaces, it’s not about minimalism, but rather about being organized and putting certain things out of sight. Organized storage is the ultimate luxury. I am currently very drawn to rooms that use one paint color on both walls and ceiling. My current color love affair is with dark gray. Rust and merlot are still dreamy as well. This vision is pretty clearly realized inside the world of "Unconscious Forms."

ID: How do the new products you’re introducing at Collective Design reflect this vision?

JSJ: We are introducing three completely new objects for Collective this year and all of them feel very sculptural. Our Cirrus double pendant in polished chrome is about balance and asymmetrical form. The June Floor Mirror almost feels like a dark walnut passageway. Our new Rex Credenza with its bronze mirror-lined drop-down compartment feels like a geode with a dark exterior and gleaming interior. I designed all of them thinking about how we use our treasured objects in our homes. The performers use each in a special way, some in traditional ways, others less so.

ID: After Collective, what’s next?

JSJ: This winter, I designed the final suite at the Jennings Hotel, a boutique hotel with nine rooms, each by a different designer. It’s in the mountains of rural Oregon, where my mother vacationed as a child. It’s my first complete hotel room design and they gave me lots of creative freedom—there’s a built-in platform bed and woven grass walls.

In May, we’re releasing the full "Unconscious Forms" film, a collaboration between me, Charlie Schuck, and Natasha Felker, during NYCxDesign. We’re showing it in a gallery-like setting as respite during the hectic shows.

ID: What’s the design community like out in Bushwick, where you’re based?

JSJ: We have a prototyping workshop in Bushwick, Brooklyn, and a small office in Chelsea, so I get to enjoy two wonderful and very different areas. Bushwick is still pretty up and coming, but there are a lot of makers. We share the workshop with builders, set designers, and metal workers, so we constantly share resources and help each other. It’s a great space for experimentation.

In a very similar way, we share our Chelsea office with an architecture firm and a fashion designer. New York is so expensive and tough that people must work together, but this leads to great friendships and collaborations.

JSJ: Pierre Paulin’s redesign of Paris’s Palais de l’Elysée, where the French president lives. It has since been redesigned, but perfectly balances modern design inside a historic structure.

JSJ: I’d love to do more custom objects and spatial designs for hotels. They’re spaces where people allow themselves to live (however temporarily) inside a fantasy.