Edelman Leather co-founder Arthur Edelman passed away on January 30. He was 92. Preceded in death by Teddy Edelman (d. 2016), his wife of 66 years, Arthur is survived by their six children: Sam, Sally, Toni, David, Mary, and John.

Arthur Edelman was born in the Bronx on July 19, 1925, to Russian immigrants. After serving in the Navy, he studied acting at Sarah Lawrence College through the G.I. Bill. "He went there when it was the first year they allowed men in," recalls Echo MacKenzie, vice president of marketing for Edelman Leather. "He figured his odds were pretty good to meet a girl!" He met Teddy Edelman shortly thereafter. They wed four days after graduating and became the longest married couple to have met at the school. 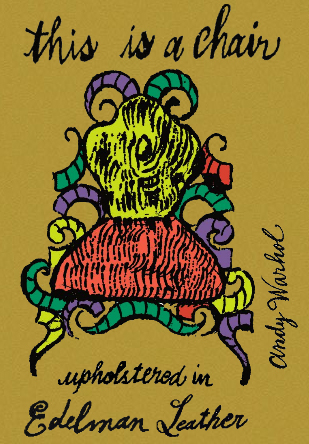 After Arthur’s acting career hit a standstill, the couple joined Teddy’s family tannery business, Fleming-Joffe, which became the leading supplier of high-fashion leathers. Andy Warhol joined their team as a graphic designer. After a six-year stint, he left the business in 1964, the same year the Edelmans received the Neiman Marcus Award for distinguished service in the field of fashion.

The Edelmans sold Fleming-Joffe in 1971 and launched Edelman Leather a decade later, with the goal of providing luxury upholstery to architects and interior designers for high-end residential, office, hospitality, aviation, and marine projects. Warhol contributed the iconic This is a chair upholstered in Edelman Leather poster that distinguished the brand.

"Both Teddy and Arthur dreamed up ideas and were inspired by so much," MacKenzie says. "Being around that energy was life-changing. They cared about our lives, taking stock in who we were, helping us to grow and be inspired by more... encouraging museum visits and much reading."

Although the Edelmans sold the brand to Knoll in 2007, Arthur continued designing patterns—and the imaginative stories accompanying them—until 2009. Today, the line includes more than 800 colorways and over 80 types of leather, all sustainably sourced.

Arthur and Teddy leave behind a resounding appreciation for design. Their youngest son, John, is president and CEO of the modern furniture giant Design Within Reach, which boasts 35 retail locations including the New York flagship. The oldest son, Sam, founded a series of successful fashion and footwear brands now owned by Caleres.

Editor in chief Cindy Allen posted a eulogy for Arthur on her Instagram. "He was the man! So dashing and charismatic, movie star looks, completely in love with Teddy, fiercely devoted to John and his entire family... It was my honor to call him my friend."