Austrian-American sculptor and Interior Design Hall of Fame member Erwin Hauer passed away on December 22, 2017. He was 91. 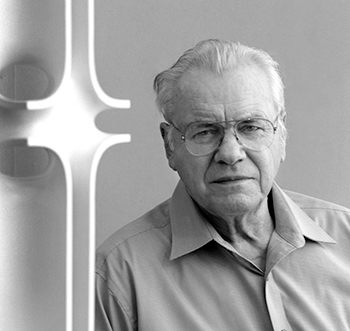 Erwin Franz Hauer was born on January 18, 1926, in Vienna. After serving compulsory military service in World War II, which left him with a leg injury and partial hearing loss, he enrolled at Vienna’s Academy of Applied Art and the Accademia di Belle Arti di Brera in Milan. In 1955, Hauer began studies at the Rhode Island School of Design with a Fulbright scholarship. Josef Albers invited him to study at Yale University the following year. Hauer went on to teach sculpture there from 1957 to 1990, named Professor Emeritus of Sculpture upon his retirement.

Hauer’s sculptural architectural screens merged modularity with a mathematical expressiveness. Inspired first by Henry Moore, and later the Constructivist sculptors Naum Gabo and Antoine Pevsner, Hauer cast his most popular series, Continua, from molds in concrete, gypsum, and acrylic resin using processes he developed while living in Vienna. But it was in the U.S. where he caught the attention of Murals Inc, the company that would produce and market his designs.

Hauer’s screens flourished in America’s postwar heyday, where they became emblematic of modernism. Florence Knoll installed them at the First National Bank & Trust Company of Miami in 1958, and, two years later, at the New York offices of Look magazine. They wrapped the Coca-Cola Pavilion at the 1964-65 New York World’s Fair, and, in the late ’60’s, NASA tried to patent a pattern it developed, only to discover Hauer had beaten it to the punch. By the time production stopped in the mid ’60’s, Hauer’s screens could be found in such far-flung locales as Montreal, Mexico City, and Caracas, Venezuela.

Hauer remained dedicated to his craft throughout his life, quietly settling in Bethany, Connecticut, while teaching at Yale. Princeton Architectural Press published Erwin Hauer Continua: Architectural Screens and Walls in 2004. But it was a year earlier that Hauer reconnected with Enrique Rosado, a former student at Yale. Rosado convinced him to revive Continua for commercial production but using modern technology. The resulting screens are CNC-milled in MDF and limestone.

Though slowed down by age, Hauer published his second book, Still Facing Infinity: Sculpture by Erwin Hauer (Images Publishing), just days before his death. John Hill, designer of both books, recalls the universal influence of Hauer’s sculptures. "Erwin's work cuts across many disciplines—his sculptor peers, of course, but also architects, mathematicians, and musicians get caught up in its elegance, complexity, and simplicity."

Interior Design editor in chief Cindy Allen inducted Hauer into the magazine’s prestigious Hall of Fame in 2008. “When his first book landed on my desk a decade ago, I became obsessed with him and his modular large-scale screens,” she recalls in Design Milk’s Friday Five. “I made several visits to his treasure trove of a barn/studio in Connecticut. Erwin’s designs are as relevant today as ever, and he’s experiencing somewhat of a resurgence, having designed leathers for Spinneybeck and screens for Knoll. To me, he was an icon, and the most lovely and gentle man.”

THE GREAT ERWIN HAUER! Read about my special relationship with this master/artist in the recent article in Design Milk's Friday Five (link in bio). These pics were from a studio visit: many of these sculptures —especially the bronze pieces—were made in the 50's that few have ever seen! He is one-of-a-kind! #erwinhauer #masterartist #midcenturymodern #interiordesignmag #goforthanddesign