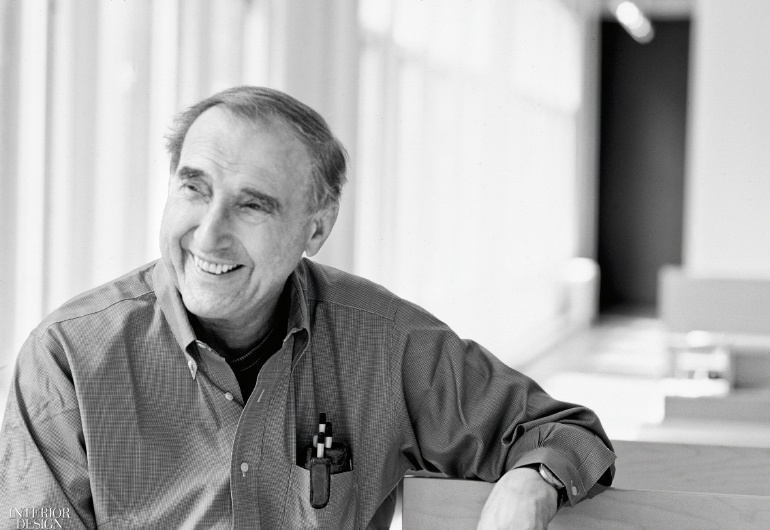 Appearing at Bohlin Cywinski Jackson’s newly relocated Philadelphia office, Peter Q. Bohlin radiates an air of perpetual amusement. His quick blue eyes, nearly obscured by bushy brows, gaze with delight at the warehouse-style windows and mushroom columns, and he grins as colleagues gravitate over to update him on projects around the world. The place has a collegial vibe, which the avuncular Bohlin has nurtured for more than 50 years, baking it into his designs.

A Zelig of the design world, Bohlin has garnered more than 650 awards. They include eight National Honor Awards and the Gold Medal from the AIA. And how many designers can say that, as a young upstart, they were featured in the New York Times Magazine or that they’ve been commissioned by both Steve Jobs and Bill Gates? “None!” Bohlin says with boyish disbelief.

The New York Times Magazine story, written by Paul Goldberger, was about Bohlin’s seminal Forest House, an exercise in low-cost high design. He built the Connecticut cedar cabin for his parents in 1975, but its huge industrial-style windows and eco aesthetic seem fresh enough to have alighted among the trees last week. If there were a genetic test for modernist residences, an awful lot of houses in the past 50 years would include a DNA match with Forest House.

His basic philosophy about “the making of a pleasant space” applies to all his work, from a barn converted into a visitor center and offices, along with a new dormitory wing, at Frank Lloyd Wright’s Fallingwater in Mill Run, Pennsylvania, to Scranton’s William J. Nealon Federal Bldg. & U.S. Courthouse and Pixar Animation Studios in Emeryville, California. The most ubiquitous examples are some of the first locations of the Apple Store, each site-specific yet emanating the same welcoming warmth, with Alvar Aalto stools at Parsons tables.

Collaborating around a table is something Bohlin loves to do at the firm’s offices in San Francisco, Seattle, New York, and Pittsburgh as well as Philadelphia. He’s based in Wilkes-Barre, where he co- founded Bohlin & Powell in 1965. He had moved there as a boy before his father became president of Eberhard Faber—partly explaining the younger Bohlin’s pencil connoisseurship. He went on to earn degrees from Rensselaer Polytechnic Institute and the Cranbrook Academy of Art, where he was influenced by Eero Saarinen, Charles and Ray Eames, and Florence Knoll.

At 80, Bohlin is neither rumpled nor slick: gray flannels, a white button-down over an ocher T-shirt, a hardwood-root walking stick. A hand-tooled leather pocket protector holds a bouquet of colored pencils, a nerd accessory carried off with panache. He’s still sketching, still making his mark with strokes at once bold and nuanced, as ideas flow from eye to paper. He’s happiest holding a red graphite pencil, ordered by the gross from Ito-Ya.

Principal Ray Calabro recalls the snowy afternoon in Wyoming’s Grand Teton National Park when he and Bohlin scouted the site for what became their Craig Thomas Discovery & Visitor Center, then sketched on the hood of their car: “A lot of inspiration comes from noticing where the sun is, what the views are, where the wind blows.” Bohlin himself adds, “You have to listen hard, not just with your ears but with all your senses.”

Depth is a word that comes up often when people talk about him. But defining it is elusive, a task that requires hovering over every detail of his vast, diverse oeuvre. It might be faster to read his lyrical essay “Nature of Circumstance.” He writes, “I have always been intrigued by how places are revealed as we move from here to there—how a changing point of view can titillate and compel, how we are drawn from place to place. Our architecture is enriched by a fascination with the potency of beginnings and endings, whether of a journey or an object—the foot of a column, the end of a beam, or the edge of a wall that reveals its construction.” Wherever the journey takes him, Bohlin is in the details.