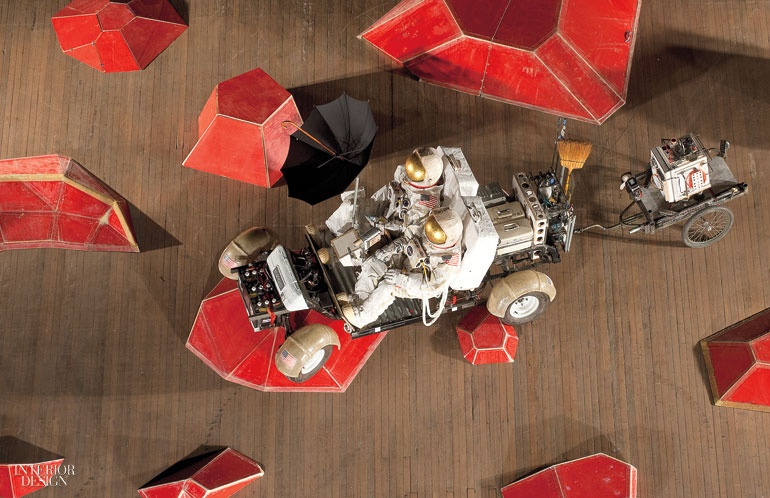 It was a busy summer for sculptor and installation artist Tom Sachs. He launched the Mars Yard 2.0 sneaker, an upgrade of his previous collaboration with Nike. He created a video, shot in his New York studio, for torchy R&B singer Frank Ocean’s new single Provider. But mostly Sachs has been preparing for two shows that opened this month: “Objects of Devotion,” at Lower East Side gallery, Sperone Westwater through October 28, and “Tom Sachs: Tea Ceremony” at the Nasher Sculpture Center in Dallas through January 7.

Sachs practices bricolage, the art of making things out of whatever materials are at hand. His 12-person studio functions like a medieval crafts guild, complete with an amusingly rigid set of work rules explicated in a droll video, Ten Bullets. He and his team not only reproduce cobbled-together versions of every category of natural or manmade object, they also recreate the programs, systems, rituals, or subcultures—space expeditions, tea ceremonies, boom box culture—to which they belong.

Interior Design: The Nasher exhibit reworks the accoutrements of the traditional Japanese chanoyu, or tea serving ritual. What drew you to it?

Tom Sachs: The chanoyu is everything New York life is not—slow, meditative, quiet. It’s about taking time to enjoy the pleasure of preparing and serving—cherishing and expanding the moment, nothing more. I was interested in how it might be made to express who we are as Americans. For example, the Japanese say it takes 5,000 attempts to master the art of whisking tea—meaning you never achieve perfection. By making a motorized whisk, which efficiently creates the right amount of froth, I kept an important element of the ritual while acknowledging our limited patience.

ID: You also just curated a small show of sculptures from the Nasher’s permanent collection.

TS: Their holdings—Constantin Brâncusi, Alberto Giacometti, David Smith, Claes Oldenburg, Donald Judd, all the great modernists and contemporary sculptors—are a precise summary of my early influences. In my work, it sometimes appears that political commentary takes precedence over formal issues. But my curatorial approach is quite formalist—exploring basic issues like shadow and light, negative and positive space, materials—which is a return to my roots.

ID: You’ve gone even further and made your own versions of some pieces.

TS: Well, there are copies of The Kiss and The Cock by Brâncusi, but mine are made of plywood or bronze. There’s an authenticity to making these “fakes” because you spend so much time studying the original you really get to know it. Right next to them is my mixed-media copy of a yellow Rubbermaid plastic bucket and mop wringer. Whoever made the original mold had a real hand; it’s a beautiful piece of sculpture. I wanted to show that it shares formal qualities with the Brâncusis.

ID: The Cabinet, a major piece in your New York show, is full of what you call “knockers”—various types of cudgels. Why memorialize implements designed to hurt people?

TS: I’ve always been interested in weaponry because historically it’s been a major way of expressing where we are as a culture: medieval armor, Shinto-period samurai swords, 18th-century warships, 19th-century dueling pistols—you could write a thesis about any one of these and its relationship to art and craft, economics, and politics. And yet they’re such primitive things at heart. It’s the point Stanley Kubrick’s making in 2001: A Space Odyssey, when the first tool the apes make is a weaponized bone, which, thanks to that famous match cut, turns into a space craft.

ID: The movie depicts a hyper-designed universe only Steve Jobs could love. Your beat-up knockers share little with all that immaculateness.

TS: Much as I love the Apple world and use it all the time, it doesn’t work for my art. I’m a caveman who makes things with his hands. The iPhone shows zero evidence of human involvement—it’s perfect in a 2001 sense—whereas you look at anything I’ve made and it’s deeply flawed and completely human. The glue drips, the sweat stains, and the welds are transparent representations of me as a maker, taking the opportunity to say, “I was here.”

ID: The knockers are self-referential in another sense, too.

TS: Each is inscribed with the name of a person or institution that, directly or indirectly, has had a profound effect on my life—Frank Gehry, the Ivy League, Jimi Hendrix, my mother. In a way, the work is a self-portrait. They form a community around me, and each tells the story of who I am, who I want to be, who I’m afraid to be or might become.

ID: Some pieces are even more personal, like McMasterbation, which seems to suggest that your fascination with hardware borders on pornlike addiction.

TS: McMaster-Carr Supply Company is the Holy Grail of industrial catalogs and, like a lot of people, I’m a devotee. I was poring through it and my wife asked, “Are you McMasterbating again?” That’s funny, so I made a phallic-shape shrine to the idea.