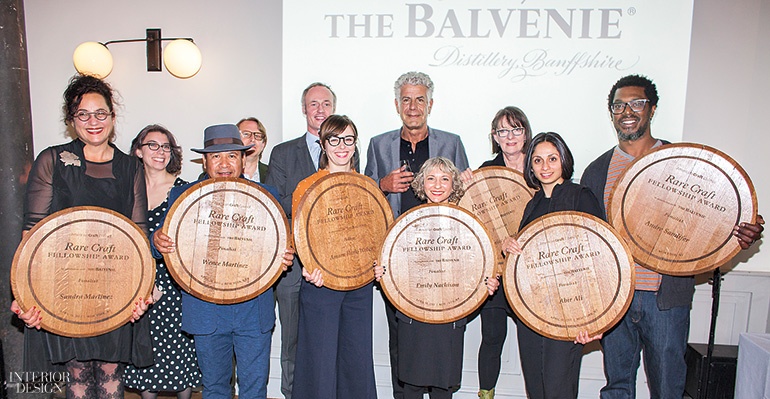 Interior Design mourns the loss of Anthony Bourdain, who passed away on June 8, 2018. To honor him, we revisit his profile from our June 2017 issue.

Chef, author, globe-trotting television host... interior designer? Not quite, but Anthony Bourdain is turning his gimlet eye toward yet another creative field. One effort is his collaboration with Roman and Williams on the conversion of a landmarked pier on New York’s Hudson River into a food hall with vendors from the countries he’s long championed as the host of CNN’s Anthony Bourdain: Parts Unkown. Another is his role as lead juror for honors conferred by the nonprofit American Craft Council to support the preservation of traditional techniques.

Bourdain speaks of the Rare Craft Fellowship Award finalists with reverence: “They’re doing something that a lot of other people do faster, cheaper, and dumber. The whole economy, the market, all the forces in the world conspire to tell you that this is not the way to go. Yet people have chosen to take this particular path, to do something that they’re passionate about, that they believe in, regardless of the difficulty.”

Their narratives are compelling. After meeting in architecture school, Abir Ali and Andre Sandifer got married and established the furniture company Ali Sandifer. Operating out of a Detroit industrial center by Albert Kahn Associates, they make furniture that’s reminiscent of George Nakashima, though less organic. Sandra and Wence Martinez, a married team in Wisconsin, make rugs under the name Martinez Studio. The patterns are based on her symbolist paintings, which he reinterprets in wool according to skills passed down from his grandfather in Oaxaca, Mexico, where the pair still source their yarn. Textile designer Janice Arnold of Washington state’s JA Felt has researched nomadic tribes of Central Asia and Mongolia and has collaborated with Interior Design Hall of Fame member Rysia Suchecka on a bench at the Bill & Melinda Gates Foundation in Seattle. In Portland, Oregon, glassworker Emily Nachison creates sculptures that combine her primary medium with materials that range from steel to horsehair.

The finalist from the world of fashion, Amara Hark-Weber of Minnesota’s Hark Weber Handmade Shoes, turned out to be the winner. That means she won $10,000 in addition to scoring an apprenticeship with the master craftsperson of her choosing in Scotland, home of the Balvenie Distillery Company Limited, the award’s sponsor. Other finalists got $5,000. And everyone received their fair share of applause during the awards ceremony at the Wythe Hotel in Brooklyn, New York.

Jury duties concluded for this year, Bourdain is shooting the third season of Raw Craft With Anthony Bourdain, a Balvenie-sponsored YouTube series in which he interviews artisans as an extension of the award. He’s furthermore hard at work conveying his vision for the food hall, estimated to open in 2019, to Roman and Williams partners Stephen Alesch and Robin Standefer, known for their restaurant and hotel work. “I’m looking for something that feels random and chaotic, a post-apocalyptic Grand Central station as if it were suddenly populated by Chinese hawker-vendors,” he says. “What’s awesome is that Robin and Stephen got it right away. We absolutely had a Vulcan mind-meld. Also the pier has incredible bones.”

Bourdain cites disparate design influences deriving from his well documented love of cooking, travel, and films. He’s enthralled by the 1960’s and ’70’s movies directed by Bernardo Bertolucci and Pier Paolo Pasonlini, who captured the brutalist architecture of the era in stark black-and-white. “We just shot a TV episode in Rome, maybe the one I’m proudest of. Design-wise, I think it’s the finest thing we’ve done,” Bourdain says. “The constraint we put on the camera people was that there would be no classical Rome. It would be all brutalist.”

In terms of industrial design, his top pick is a Kramer Knives chef’s knife. “It’s a thing of such incredible beauty—I can barely stand to gaze upon it,” he says with a laugh, adding that his favorite interiors are at André Balazs hotels. “The Chateau Marmont in L.A. is perfect. Also the Raleigh in Miami Beach. And I stay in a lot of hotels.” In the quest for culinary and design excellence, he’s traveling more than 200 days a year.