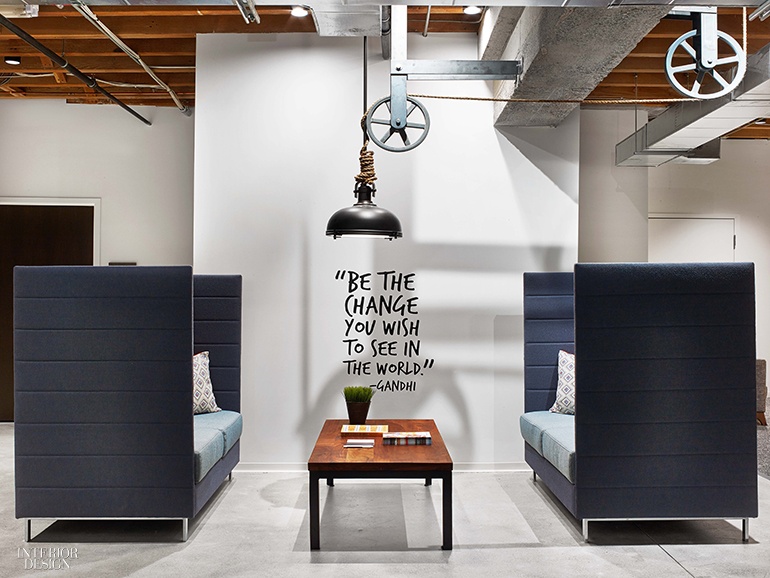 When client and designer mission align, it generates a special synergy. Consider the dynamic collaboration between the workplace specialist M Moser Associates and the nonprofit Teach for America. Service and innovation are at the core of the relationship.

M Moser opened in Hong Kong, when it was still a British territory, to provide architecture and design services for multinational companies expanding into Asia. Today, the firm has 15 offices worldwide. Teach for America, established to recruit top college grads to work in poor rural and urban public schools, now serves 53 communities. For decades, it made do with pre-built offices that didn’t particularly suit its needs. Then it hired M Moser to design a Houston office that might serve as a prototype for other regional hubs. The outcome was such a hit that four other locations—Dallas, Atlanta, Washington, and San Francisco—rolled out in the next few years. Senior associates Jessie Bukewicz and Charlton Hutton talk about rethinking those offices as something called the “third place.”

ID: What does the “third place” mean exactly?

JB: It’s a term coined by sociologist Ray Oldenburg. The “first place” is home, the “second place” is traditionally the office, and the “third place” is an anchor for community life, like a Starbucks. We aimed to create something along those lines for Teach for America administrators and corps members, the teachers, because what they all needed was not a typical workplace. Teach for America did a great job, via interviews with staffers, in showing us how they operate and what their needs are.

ID: Could you describe the project’s chief goal?

CH: To create an environment where everyone mingles, shares knowledge, and spontaneously brainstorms.

ID: What was their main complaint regarding the existing setup?

CH: Administrators use the space one way by day, and teachers use it another way after classes. The design wasn’t serving both well.

ID: How did you change that?

CH: By creating an open office landscape with a benching system to encourage inter-action while also providing areas for one-on-one meetings, along with a space for gathering town-hall style. For the times when someone might require a private space, we added flex offices and placed them at the core not to obstruct daylight for everyone else.

ID: How did the Houston employees respond when they first saw the office?

JB: That was special. They made an audio recording so that we could hear their amazed reaction.

ID: What was the favorite element in Houston?

CH: The café and how it opened up to the town-hall space.

ID: And the least-favorite element?

JB: The bleacher seating in the town hall wasn’t mobile. They wanted more flexibility. We learned a lot from that.

ID: Why do you think the hybrid spaces have been so successful?

CH: Buy-in. When you embark on such a different concept, you need to have great change management. You need to get the end-users involved in the planning and provide them with amenities that will make everyone appreciate the new model. How you do that is different for each work culture.

ID: After Houston, how did you differentiate the other Teach for America offices?

JB: We brought out the regional characteristics of each. For example, Atlanta was all about being the city-in-the-forest. We created a “porch” setting with rocking chairs, tree-stump tables, and recycled wood cladding. The Atlanta team also likes to work in clusters, so we placed 120- degree workstations in a kind of hive formation, supplemented by phone rooms and several audiovisual and meeting rooms.

ID: And San Francisco was the last of the five?

JB: Yes. By the time we did San Francisco, the client trusted us enough to allow us to become more involved in the graphics and messaging. Because social reform is very much a part of the personality of that office, we emblazoned walls with quotes from the group’s favorite social activists and used their names and portraits for the different meeting rooms. There’s a lot of pride and ownership built right into the architecture.

ID: What are you both working on now?

CH: For a longtime New York client, Blackstone, I’m conceiving an innovations and infrastructure unit. It’s a completely new design and brand direction for the company.

JB: In Atlanta, I’m designing a software development and connected-experience center for Honeywell that will show-case its leadership in the “Internet of things.”