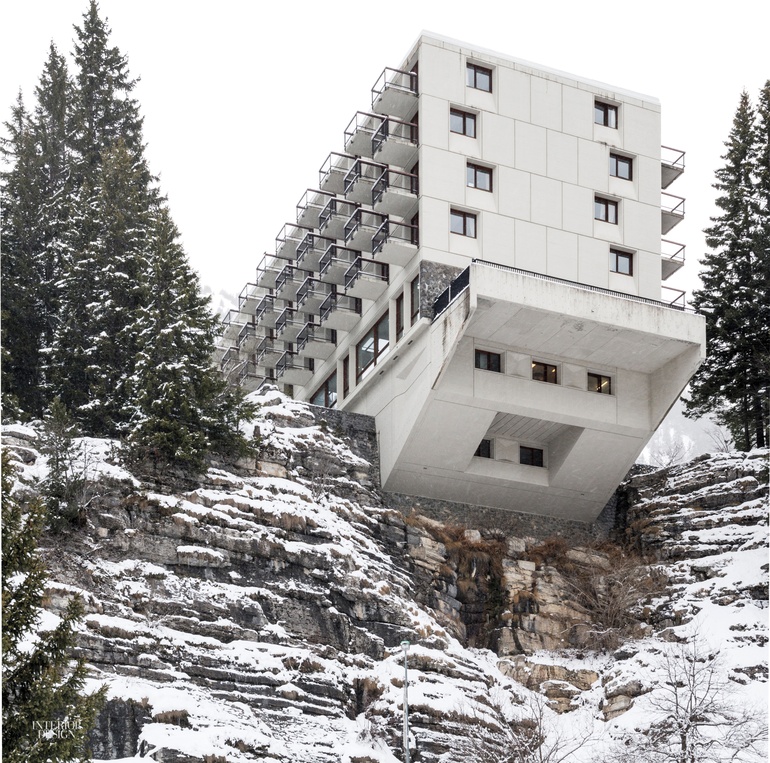 Sculptural and expressive, at 5,200 feet, Flaine was a sensation upon opening in 1969, unprecedented in ambition and scale. The French ski resort was conceived as an all-embracing Gesamtkunstwerk by Marcel Breuer. Today, it’s a superbly preserved example of brutalism in synthesis with art.

The story begins in 1959 near Mont Blanc, in the municipality of Arâches-la-Frasse, where a geophysicist, Éric Boissonnas, and an architect, Gérard Chervaz, discovered an impressive site. After buying it, they turned to Marcel Breuer and Associates, Architects, to create a car-free, walkable master plan. Breuer populated it with a hotel complex, apartment buildings, restaurants, shops, and later an ecumenical chapel—clean architectural forms in precast concrete, slate, limestone, and pine. He also designed street-lamps and signs, giving the resort a coherent aesthetic. For the interiors of the hotels and apartments, he designed coffered ceilings, sculptural fireplaces, and furniture.

Eventually, the two hotels were connected. Now called the Hôtel Terminal Neige–Totem, it has been restored and renovated by R Architecture. “Our intervention concentrated on the public spaces,” architect Guillaume Relier says. “We stripped the layers that had been added over the years and revealed the architecture—still vivid, expressive, and modern.”

The same can be said for the sculptures that Boissonnas and his wife, Sylvie, acquired for outdoor locations. Monumental pieces by Pablo Picasso, Jean Dubuffet, and Victor Vasarely still stand on plazas between the buildings and the slopes.