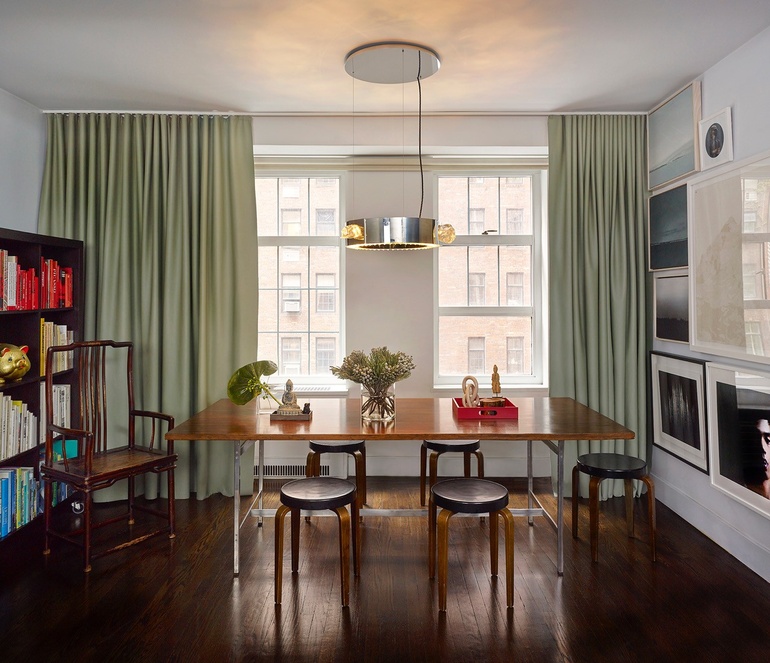 Interior Design visited the apartment of hospitality designer D.B. Kim in our September 2008 issue. The 700-square-foot space is part of London Terrace, a group of 1931 brick buildings in New York’s Chelsea neighborhood. “Back then, I was just settling in,” Kim says. He’s now been there almost 10 years, and the apartment has become an even more beloved home base. The designer, who has previously worked at Starwood Hotels & Resorts and Wanda Hotel Design & Research Institute, has long used his dwelling as a testing ground for his projects. “The location of my chairs, the perspectives from sitting and laying down… I take those details to my work and approach a space the same way,” Kim says.

Though he’s made subtle changes over the years—rearranging furniture and possessions—the main remodel took place when he moved in. Kim describes a deep purple kitchen leftover from the previous owner. While the color was one problem for Kim, an even more pressing issue was that the room had an open-plan layout. “You would come in the door and see the kitchen immediately,” he explains. “This is a Tudor, English Revival style building—I knew the original layout would have compartmentalized the floor plan.” Kim restored the space back to its existing style by closing up the kitchen with pocket doors.

Outside of the kitchen sits a living and dining room that doubles as Kim’s home office. (The dining table, a Florence Knoll design with a rosewood top, works well as a makeshift desk.) A plush sofa, piled with pillows, doubles as a bed for visitors. Other furnishings include a Peter Zumthor table, a rug by Suzanne Tick for Tarkett, a Marcel Wanders stool, and wood side tables by Kim.

Kim’s most recent edits to the space are centered on artwork. After living in Beijing for over two years while at Wanda, he developed a fascination with emerging Chinese art. One result of that interest is a wall of contemporary ink works, reinterpreting traditional calligraphy, in the bedroom. Other pieces in the apartment include photos by Peter Ross and Martin Schoeller.

Visit Kim’s home at a later date and one is sure to spot further adjustments. “I always end up moving things around to make it work for me,” Kim says. “As a designer, I feel comfort is the most important luxury that one can provide.”