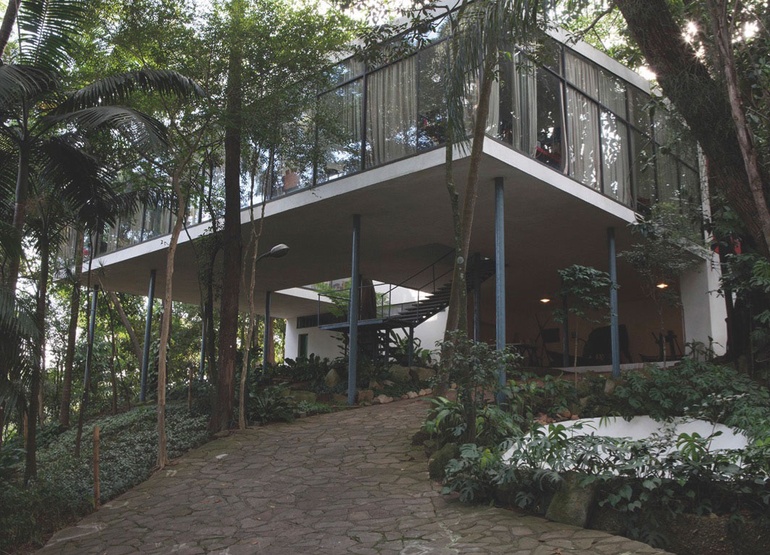 As a traveling exhibition on famed Italian-Brazilian architect Lina Bo Bardi prepares to close, an addition to Bo Bardi’s São Paulo residence will mark its four-year run. Bo Bardi designed the Bowl Chair in 1951, the same year she designed her iconic residence. The Bowl Chair did not go into production at the time, but Arper released a limited run of 500 chairs on the occasion of the exhibition (with proceeds from chair sales supporting Bo Bardi’s foundation). The Italian brand has now installed the chairs in her residence as a new permanent fixture.

Her residence, Casa de Vidro (“House of Glass”), is a stunning example of Bo Bardi’s oeuvre and Latin American modernism. It is defined by a striking, concrete-and-glass volume suspended over the lush foliage of Morumbi, São Paulo. Bo Bardi lived there until her death in 1992.

The exhibition, called “Together” and curated by Noemi Blager, showcases odes to Bo Bardi’s life and work by contemporary artists Madelon Vriesendorp, Ioana Marinescu, and Tapio Snellman. It has been on the road since 2012, traveling to London, Basel, Milan, and beyond, before its final stop at the SESC Pompéia, a cultural center in São Paulo designed by Bo Bardi that opened in 1982. The exhibition closes this weekend.