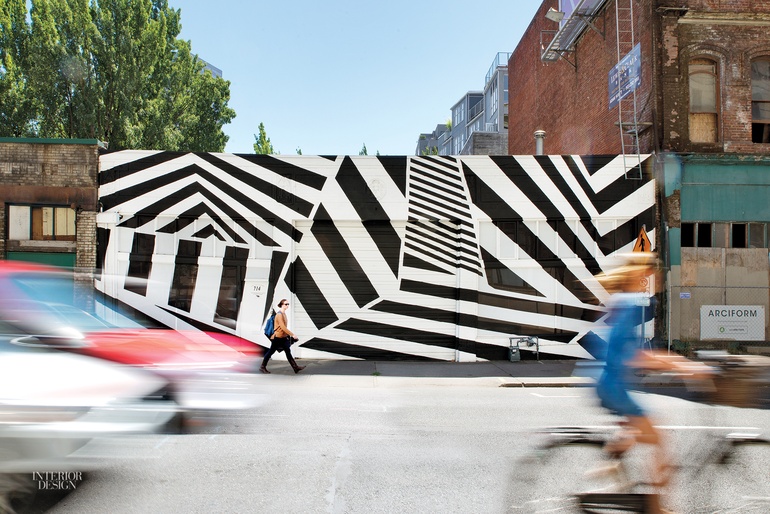 Diverse locales have enriched the experience of Laurence Sarrazin. The daughter of a Canadian diplomat, she has called Shanghai, New York, Paris, and Hong Kong home, and she operates at the intersection of multiple disciplines, shaping both spaces and the objects within. She honed her product-design talents at Ayse Birsel’s Olive 1:1, with projects for Herman Miller and Renault. Next, she worked on whole buildings—with Bernard Tschumi Architects in New York and ZGF Architects in Portland, Oregon, where she has now set up a firm, Los Osos.

The result? A vibrant array of projects in the Pacific Northwest, most notably the transformation of a 1920’s motorcycle shop in Portland into Hand-Eye Supply, a store that belongs to her husband, Eric Ludlum, who also heads his own product design and graphics firm, Core 77. The garage adjoining Hand-Eye Supply houses another Sarrazin-Ludlum effort, her trailer-office for his design-centric online job board, Coroflot. And did we mention that Sarrazin’s glimmering parade float for Portland’s Rose Festival took first prize?

How does your mobile office project reflect your outlook?

That project is the most me of anything I’ve done, because it’s halfway between product design and architecture. We wheeled a trailer in here and built the structure, in place, over a 10-day period. The thing I’m most excited about is that the construction is post-and-beam, which alleviates the wall’s function as a structure. So I used polycarbonate as siding, which allows all this light to come in while offering an acoustical barrier.

What about the trailer’s interior?

Inside is a system of parts. It’s a flexible creative space to reflect the changing nature of work. I designed and fabricated all these little items to make the space functional on many levels. Because there are brackets with holes for hooks all along the walls, the desks and accessories can theoretically go anywhere.

It seems like the concept could extend way beyond offices?

I see the next version in so many different flavors—office, retail, showroom, home. And each has its own challenges and parameters that would determine what the skin would be, the size, how much light is let in, how much storage, all those fun design problems. It would be exciting to find manufacturers.

How did you approach designing your husband’s store?

Retail spaces afford a designer so many possibilities in terms of experimentation with form and function. The overall idea for this store was to express the brand’s ethos of curiosity through creation. So the metaphor is an idealized workshop or studio. There’s a lot of raw wood, which tells the story of making.

Your use of wood is notable in both the trailer office and the store.

In the Pacific Northwest, exploration with lumber is a real opportunity. It’s the basic material here, and its tactile and textural warmth offsets the linearity of both projects. We took the wood from three 150-foot-tall Douglas fir trees on my husband’s childhood property, when we were selling it, and had them cut and kiln-dried. After that, we had wood up to our ears. We almost had no choice but to use it!

Has your attention to nature increased since moving to Portland?

When we first arrived, Eric and I did a project where we experimented with natural materials, a cross between art and product. And that was a direct result of being in Portland. The first time you go to the forest and see the moss you’re like: Whaaat? It’s pretty overwhelming. A decorative screen came from tracing a portion of the forest underbrush. Still, for me, nature isn’t the real draw about being in Portland.

The fact that we have space, real space, to imagine something. In New York, you’re schlepping sheets of material in the subway, and you don’t have the resources to make a store or have studio space. It was really for that opportunity we came out here. I couldn’t have done the trailer office otherwise, because I wouldn’t have actually physically been able to make it. Where could you do that in Manhattan?