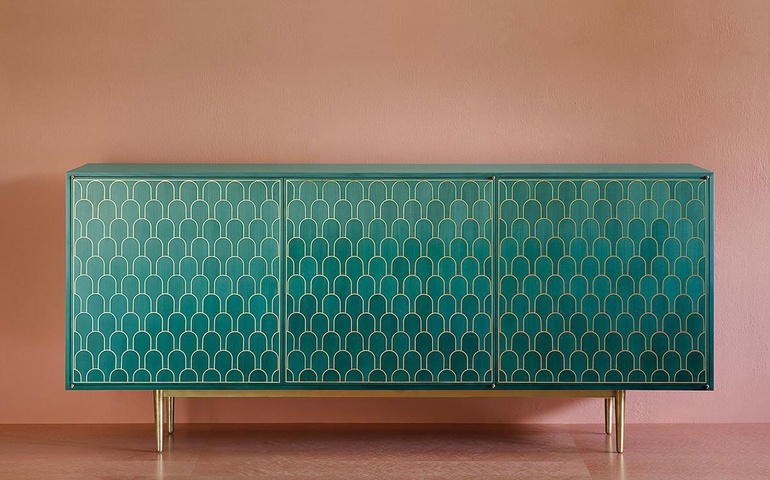 While Salone del Mobile still reigns supreme as the industry’s launchpad for new design, each year the ever-expanding London Design Festival brings increasingly tough competition. This year’s edition (its 13th) shone the spotlight on the handcrafted with exhibitions such as Makers House, an impressive pop-up by Burberry in collaboration with design store The New Craftsmen, which showcased the skills of artisan makers from across the country. Future Heritage, a beautiful exhibition of collectable craft curated by Corrine Julius, broke up the rows of booths at interior design fair Decorex, while east London show Tent London launched the first British Craft Pavilion celebrating a host of designers, makers, and craftspeople working through a range of mediums. We take a look at some of the best new pieces that emerged at the show.

2. Darkroom x Bert & May
Called Split Shift, this new collection of encaustic tiles and fabric designs are the result of a collaboration between independent London design label Darkroom and design brand Bert & May. Using Darkroom’s signature aesthetic, the new pieces feature simple geometric shapes and a monochromatic palette with a flash of blue. While each tile is hand-poured and colored with natural pigments in southern Spain, the fabrics are crafted, printed, and finished in the UK.

3. Solomon & Wu
British studio Solomon & Wu presented its mesmerizing surfaces collection at Decorex. Made up of Cast, Stencil, Pigment, and Ceramic, the richly textured surfaces are made from Elenite, a liquid medium that can be cast, poured, brushed, pigmented, or stippled.

6. Sebastian Cox
Southeast London furniture maker Sebastian Cox presented Bayleaf, a timber furniture collection inspired by the frames of medieval houses. A masterclass in cabinet making, the eight-piece collection is described by Cox as a "celebration of the colors, grain patterns, and unique differences present in our diverse, home-grown timbers."

7. Jonghlabel
Traditional hand-caning provided the starting point for these new furniture pieces by Amsterdam studio Jonghabel. Called Matmatic, the chair and stool are the result of experimenting with traditional rattan techniques. A basic rattan pattern was translated into a computer algorithm that allowed the studio to develop new patterns that could be hand-caned by highly skilled carpenters.

8. Pinch
London design studio Pinch returned to this year’s Decorex Fair with a strong showing of furniture and lighting that showcased the brand’s ability to combine traditional joinery with fresh, modern lines. New pieces include a dresser, an elegant console, upholstered dining chairs, and a beautifully crafted drinks cabinet.

11. Lucy Kurrein
The enveloping leather arms of Lucy Kurrein’s voluminous Rondo armchair for Italian brand Molinari are based upon the shape created when a boxer grabs a punch bag in between blows. “In the design, I’ve taken the cylindrical shape of the punch bag and curled it up, holding it in place between the two front legs of the chair," she says. "The legs compress into the upholstery to emphasize the soft structure inviting the user to wrap their arms around it as boxers do.”

12. David Pompa
Austria- and Mexico-based David Pompa Studio incorporate traditional Mexican crafts and techniques into their tile and lighting designs. Pieces include the Hielo pendant lamp, which is hand-painted with the 132 Virrey pattern by Puebla artisans.

14. Atelier Swarovski
Unveiled in their dramatic London studio space, Fredrikson Stallard’s show-stopping Glaciarium chandeliers for Swarovski were built using crystal components developed by the design duo specifically for use in lighting. Inspired by their extensive experiences of watching Swarovski’s complex crystal production techniques, the new components will now be available for other artists to buy and use in their creations.

17. Barber & Osgerby
An exhibition of 20 inspiring objects selected by British design studio Barber Osgerby celebrated the launch of Marker, the latest addition to the duo’s Hotaru lantern collection at London design store Twentytwentyone. Handmade from mulberry bark washi paper, the new lamps are produced using traditional methods by Ozeki Co. Ltd, a Japanese manufacturer in the Gifu province that have been making lanterns since 1891 and are recognized as leaders in the craft.

19. Nude
Leading design figures such as Ron Arad and Pentagon leant their talents to this year’s new collection from Turkish glassware brand nude, and among the highlights was this whisky set by New York designer Joe Doucet. Called Alba, which is Gaelic for "Scotland," the cleverly deconstructed Tartan pattern that is hand engraved into the glass pays tribute to the spiritual home of whisky.