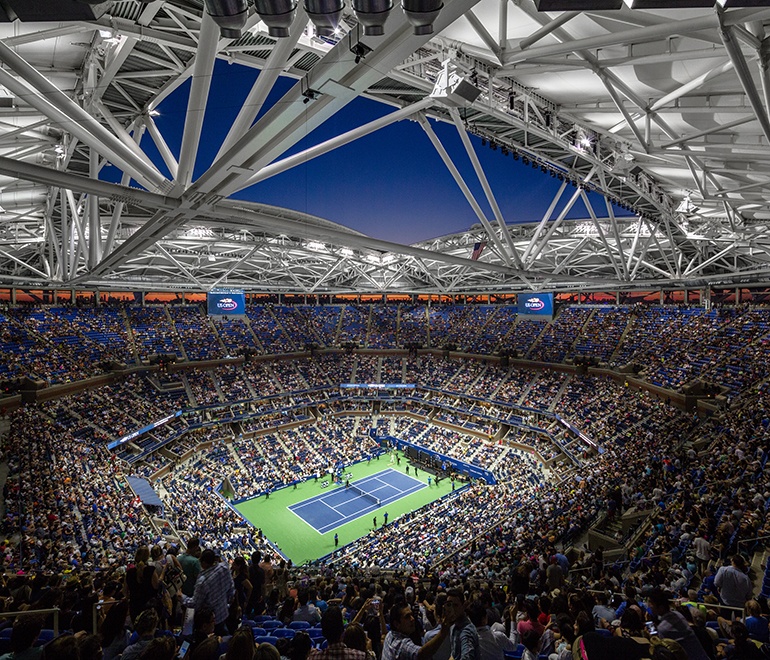 Nearly twenty years after designing the Arthur Ashe Stadium at the USTA Billie Jean King National Tennis Center in Queen’s Flushing Meadows Corona Park, architecture firm Rossetti was brought back in to add a much-needed retractable roof, opening last month in time for the 2016 US Open. Rain has interrupted matches during the two-week tournament every year for the last five years, making a protective covering an imperative addition, as the competition is the last and vital stage of the annual Grand Slam—the biggest international tennis event of the year.

As the stadium was not originally intended to accommodate a roof, Rossetti designed a rectangular lightweight steel piece, structurally independent of the existing building beneath it, held up by eight columns along the hexadecagonal perimeter and four tripod columns at each corner, disguised as tree branches. Above, two retractable Teflon-coated synthetic resin panels, measuring in at one million pounds and nearly 100,000 square feet each, can open and close in seven minutes thanks to 600 horsepower motors, even in severe weather, while remaining transparent enough to allow for natural light and views of the sky.

The roof addition, the largest retractable one in the tennis world, is part of a nine year, 550-million-dollar renovation and expansion plan from Rossetti and the USTA to transform 85% of the Billie Jean complex with three new stadiums, courts, plazas, and additional support facilities by 2019; a change allowing the campus to accommodate 15% more visitors over the two weeks—that’s 100,000 additional people who get the chance to see Serena score.