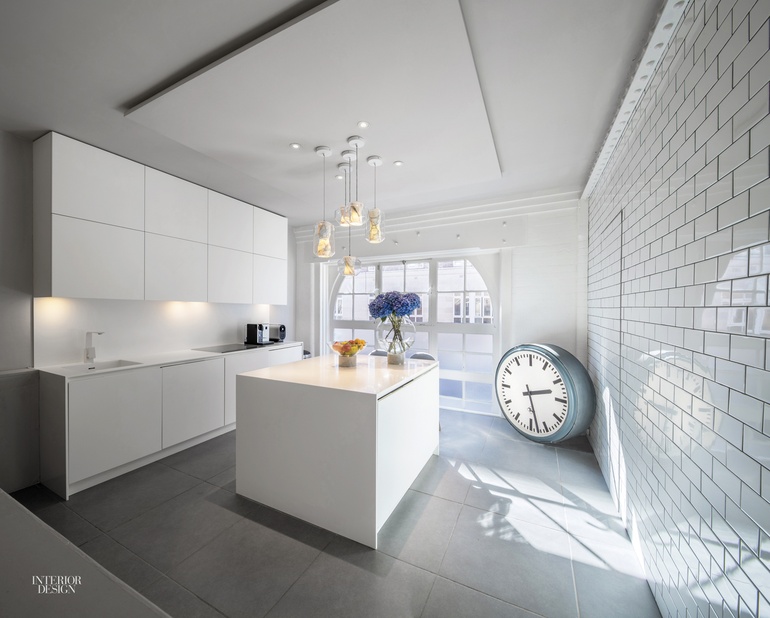 “If there’s one thing I can make, it’s a good cocktail,” jokes the fresh-faced British designer Lee Broom, as he swings in the Hanging Hoop chair suspended from the soaring 16-foot ceiling in his south London home. “I love hosting drinks parties and I do a mean Eastern Standard or Dirty Martini”—no doubt served up in his own-brand crystal glassware. Broom is being a little disingenuous given that a quick glance around the airy “atrium”—the main entertaining space of his two-bedroom apartment—reveals myriad pieces bearing his name.

The space is a veritable showcase of his talents, furnished with designs ranging from his fashion-inspired Salon sofa (he studied at Central Saint Martins and interned at Vivienne Westwood) to his graphic mixed-wood Parquetry coffee table. But the decor changes constantly as Broom develops new pieces or tests prototypes—particularly lighting. “It’s really all about the lighting here,” he explains. “During the day, natural illumination filters in through the skylight and large windows, but at night it totally transforms.” Note the illuminated balustrade around the fixed seating area and the designer’s marble tube lights on the walls.

Creating inviting spaces that segue well from day to dazzling night is one of Broom’s fortes, as his flat—occupying the ground floor and basement of a redbrick Grade II–listed Victorian fire station—attests. His boy-band good looks belie years of experience. Prior to establishing his brand in 2007, Broom was already armed with considerable interiors expertise, having designed 20 London bars and restaurants. When he bought the flat 12 years ago, Broom opened up the space, exposing existing architectural features and borrowing from the bathroom and an empty cavity in the basement to add a mini-cinema (complete with vintage art deco seats, electric curtains, and a popcorn machine). “I like to watch older films, as the space has a retro cinema feel,” he says. Indeed, just like his designs, the apartment may be thoroughly contemporary but scratch the surface and there’s often a playful nod
to the classics.