Pools Are a Key Part of Public Life, Explains the Australian Pavilion of the Venice Biennale 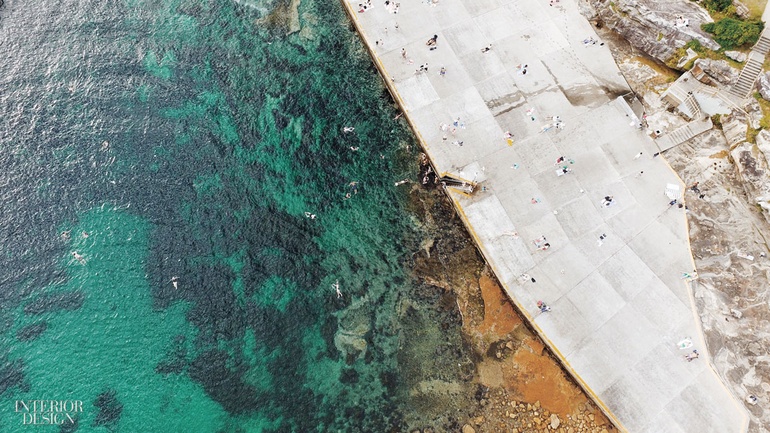 The concept was chosen for its “incisive interest in the connections between landscape, culture and architecture as observed through the frame of a singular architectural and landscape typology,” the Australian Institute of Architects explained when it announced the winning proposal for the nation’s pavilion at “La Biennale di Venezia.” All true. But you wouldn’t guess from that dryly academic description that the Venice installation is also playful, seductive, and wet.

Inside the new pavilion by Denton Corker Marshall—a cantilevered box clad in black granite—a pool filled with actual water has appeared. It’s the centerpiece of The Pool, curated by Aileen Sage Architects principals Amelia Holliday and Isabelle Toland with urbanist Michelle Tabet. Australia is said to have the highest private-pool ownership per capita in the world, but this category is only glancingly addressed. Their installation focuses on the communal variety.

“The municipal swimming pool is a key Australian public space. It’s our version of the European piazza or square, a place that anyone—of any background—is free to use and enjoy, alone or in groups,” Holliday says. “It has also been a crucial site of civic engagement for our communities. The Pool explores those themes.”

In a corner of the pavilion’s main gallery, near a large window overlooking a canal, the shallow pool is a 646-square-foot irregular pentagon surrounded by bleachers and decking built on top of the concrete floor. The rest of the space is dotted with powder-coated steel outdoor chairs commissioned from furniture designer Elliat Rich in collaboration with Aboriginal workers at the Centre for Appropriate Technology in Alice Springs. “The chairs are earth and sky colors that evoke the outback,” Toland notes.

Architecture-weary visitors can sit and absorb the calm, relaxing atmosphere. Both natural and carefully orchestrated artificial light, reflected off the pool and the canal, dapple the ceiling and walls. Visitors are also encouraged to dip their feet in the cool water.

Along with the appeal to the senses, The Pool offers commentary on the pivotal role of the public pool in Australian life—though not the historical or formal analysis we might expect from an architecture biennial. “We selected a highly diverse group of prominent Australians, all non-architects, to record their personal experiences of the pool,” Holliday says. “Played throughout the exhibition, these narratives are unapologetically subjective and anecdotal. They are stories of fulfillment and accomplishment, of segregation and inclusion, of learning from the past and reflecting on the future, all through the lens of the pool.”

For the indigenous art curator Hetti Perkins, daughter of the Aboriginal activist Charles Perkins, the public pool is important as a site of racial integration. In 1965, at the segregated Moree Artesian Baths in New South Wales, her father was involved in a standoff that is regarded as a turning point in the Australian civil rights movement. Meanwhile, environmentalist Tim Flannery, a champion of responsible water management, exults in an almost uniquely Australian phenomenon, the dramatic rock pools cut into the sandstone coastline of New South Wales to be replenished directly by ocean waves.

Olympic gold medalist Ian Thorpe reflects on pools as generators of national pride, partly for their architecture. Now landmarked, the first fully enclosed swimming pool in Olympic Games history was inaugurated in Melbourne in 1956. As for the Ian Thorpe Aquatic and Fitness Centre, which Harry Seidler & Associates completed in Sydney’s suburbs in 2007, writer Anna Funder talks of experiencing awe and inspiration in the soaring vastness, “a place of public dreaming and togetherness.”

These and other narratives form the core of a handsome book that accompanies The Pool and considerably expands on it. But it is a bold white sign, painted on a bright cerulean wall in the gallery, that most exemplifies the winning combination of pointed commentary, playful wit, and rich allusiveness. In block letters, the notice reads “DANGER DEEP WATER” and directly below “AQUA PROFONDA.” To Italians at “La Biennale,” that might look like a careless misspelling of acqua. Australians will know that the sign is a reproduction of one with considerable social and cultural significance.

Mid-century mass-immigration programs saw Melbourne’s magisterial Fitzroy Swimming Pool, built in 1908, become thronged with Italian children who, unable to read English, constantly got into difficulty at the deep end. “AQUA PROFONDA” was the pool manager’s English-speaking attempt to warn them of the danger. So evocative of the demographic changes that postwar Australia went through, the sign was never corrected and is now landmarked, a symbol of the pool as a democratic equalizer.

The importance of the Fitzroy Swimming Pool to Melbourne residents was demonstrated in 1994 when it was rescued from permanent closure by a vigorous Save Our Pool campaign, still cited as a model of community organization. “AQUA PROFONDA” has furthermore, Holliday notes, “acquired significance and fame through a variety of cultural references.” These include the title of a 2015 song by Grammy-nominated indie-rock musician Courtney Barnett. Nothing Australian, it seems, is untouched by the mythos of the pool.