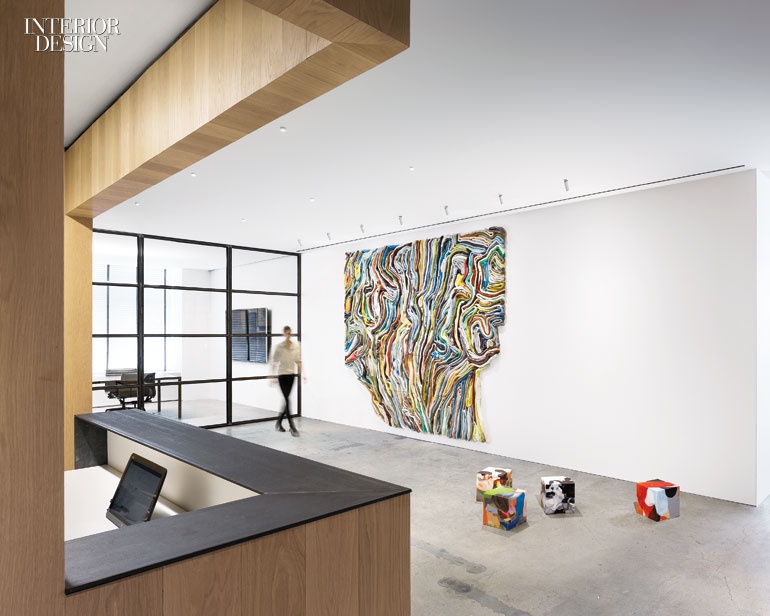 Before Aldo Rossi’s premature passing, Morris Adjmi spent 10 years working in the New York satellite office of the postmodernist maestro. Adjmi ultimately took over such unfinished Aldo Rossi Studio projects as the Scholastic headquarters, adhering as closely as possible to the original intent. Since then, however, he has perfected a contemporary urban architecture all his own—based on contextualization and dedicated to innovative materials and high ecological standards. Morris Adjmi Architects buildings, both new construction and adaptive reuse, have made a particular impact on the city, where projects include multiple Manhattan residential developments and Brooklyn’s Wythe Hotel.

When Adjmi moved offices, he began to wonder if he could find a more creative use for the walls of the 10,000-square-foot space than hanging photos and drawings of the firm’s own buildings. The idea of revolving art exhibitions was born.

Morris Adjmi: The catalyst was visiting a friend’s apartment, where I saw a mural by a Swedish artist, Matthias van Arkel. We happened to be working on a pair of Washington apartment buildings at the time, and I used the mural in a rendering for the developer. He liked it so much that he commissioned Matthias to paint the elevator lobbies.

I said to myself, “Why don’t we bring a new artist’s work into the office every few months? It will keep the office fresh and give us the opportunity to introduce the artists to developers.” It just resonated.

Interior Design: How did you get started?

MA: Our first exhibition was dedicated to Aldo Rossi. I have a collection of his drawings, models, and photographs from our days working together. Not everyone at my firm has been on-board since the beginning, so it was a good way to introduce Aldo’s work and commemorate him.

ID: Are the shows open to the public?

MA: If people want to come, we’d let them. It’s typically just our friends, business acquaintances, and clients. We have a party to open each show.

At the openings, it’s interesting to watch the staff being really passionate about explaining the art to the guests. We’re showing a range of work, but a lot of it is about how people live. That ties into what we do as designers.

ID: Who chooses the artists?

MA: I’ve been doing it, but I try to be as democratic as possible. As the program matures, I’ll probably open it up.

Some of it is just serendipity. There’s a decorative painter named Sandra Spannan who also does signage. After we hired her for the logo on our front door, we found out she’s a member of an all-women club called the Miss-Fires, and they all drive vintage motorcycles. I thought, How great to have all their bikes in here. So we will.

ID: Do you hang the shows yourself?

MA: Matthias actually did his own show. My painter friend Lyle Starr installed Aldo’s show—a really beautiful salon hanging, not the way an architect would do it. Then I called Lyle back for Nicole Patel. When we were planning how to hang her work, which is very quiet and orderly, it looked too regular. On the day we were suppose to install the show, I texted Lyle, “You’ve got to come help do this.”

MA: After Lyle and the Miss-Fires, we’re going to take a break in December and do a kind of pop-up shop. It will be half art exhibition and half design gallery, with objects in cases.

ID: Where did the idea come from?

MA: Leaving our old place, we started packing up the framed drawings and photographs that had been hanging there for years, and I had a realization. When the same things are on the wall for a long time, you just stop looking at them. I thought I’d do something different in the new space.

ID: Is the program working out the way you hoped?

MA: I think it’s keeping our minds fresh as well as our environment. Everything moves around now. The first show was just in the reception area. Then the art expanded into the kitchen. Now it’s everywhere. The change has really been dramatic.

ID: Does art have a direct effect on your architecture?

MA: A lot of my inspiration comes from the art world. I’m finishing a New York apartment building now that has a “reverse” concrete facade resembling a plaster impression of a typical cast-iron loft building. That was partly inspired by the sculptor Rachel Whiteread. And I looked at some Donald Judd sculptures for another building. Art keeps me thinking about design.