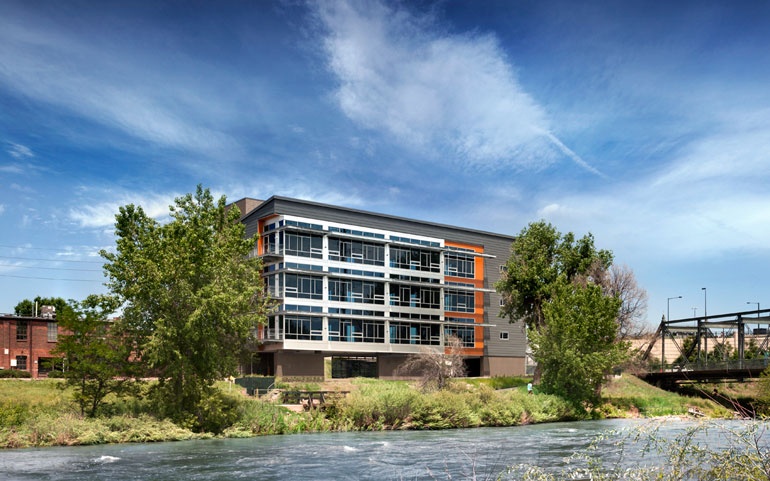 Recently voted #1 city on the US News “Best Places to Live” list, Denver, Colorado might best be described as a teenage city quickly evolving into a mature metropolis. Currently experiencing a 5-year building boom with $2.5 billion in development, almost 3 million square feet of new office space, hotel rooms, and residential units are planned or under construction in Downtown Denver. From a burgeoning aerotropolis to new small, hip restaurants, to context-sensitive custom residences, the city’s skyline and urban fabric seem to shape-shift each month as urban in-fill closes the gaps between low, mid, and high-rises alike.

With great change and subsequent development, Denver’s new builds continue to respond to, and grapple with, modern-day ideals of inclusive urban design, improved multimodal transport, and an aesthetic sensibility that captures an emerging casual-but-cosmopolitan culture. Amidst a proliferation of development, the following new builds and slated projects, while ranging in scale and scope, favor long-term placemaking and/or a clear distillation of thoughtful design intent that will continue to inform and enhance the rapidly-changing city.

On a larger scale, Gensler’s recent addition of Denver International Airport’s Westin Hotel and Transit Center caters to passengers that value airport proximity over staying in city centers. Connected via plaza to the iconic tent-like airport structure designed by Fentress Architects in 1995 and perched above a new transit center with direct passenger rail access to Downtown Denver, the hotel includes 500+ guestrooms, 37,000 square feet of conference space, fine dining, and a health club and swimming pool located within the central dip of the curvilinear form.

Also outside the city limits, the University of Colorado Denver’s “Colorado Building Workshop,” a program that partners non-profit organizations with students on collaborative design-build projects, recently completed a sophisticated series of micro cabins for the Colorado Outward Bound School. Tucked amongst lodge-pole pines on a steep hillside in Leadville, Colorado, the CNC’ed birch plywood cabins serve as efficiently-planned dormitories that balance public views and private space with a clean, warm aesthetic.

Within Denver proper, thoughtful new builds continue to emerge that counter a recent influx of arguably generic mixed-use, multi-family, and McMansion development. 4100 Bryant, a new single-family residence within the fabric of an urban residential neighborhood by Boulder-based firm Studio B Architecture + Interiors provides a fresh interpretation of the city’s proliferation of mid-century homes. The seemingly linear home blurs the line between interior and exterior with the overt insertion of a bold centralized volume including an open courtyard made complete with a swimming pool.

Other notable projects include “The Boathouse,” by Denver-based firm Shears Adkins Rockmore, a playful response to creating office space that captures a scale, character, and site response that appeals to Denver’s large millennial population and informal culture. “Sushi-Rama,” a playful Warhol-and-Lichtenstein-inspired design by LIVStudio is one of a smattering of new restaurants where the environment is as creative as the food. On the cultural front, the highly-anticipated relocation of the Kirkland Museum of Decorative and Fine Arts by Olson Kundig is slated to open in late 2017.

A three million-person city that continues to grow and thrive, Denver remains a city to watch as its architecture and interior design continues to evolve with the city’s shifting demographics, culture, and urban priorities.