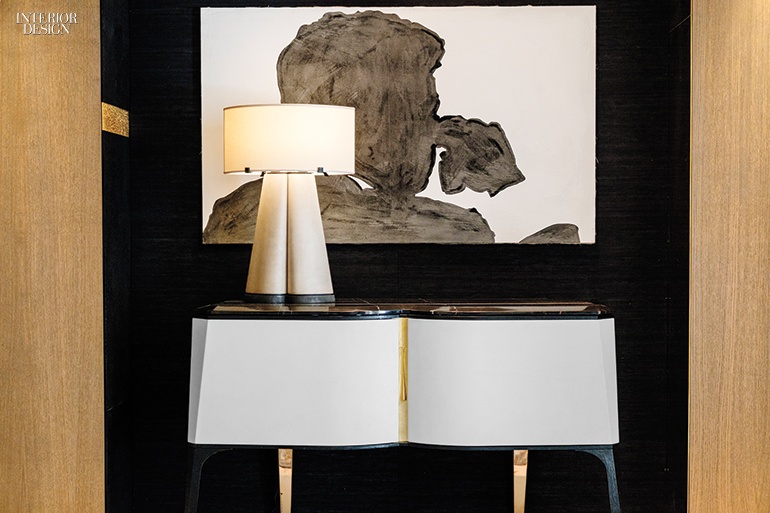 Maison Gerard’s managing partner Benoist Drut once told Interior Design that Achille Salvagni’s pieces “feel extremely relevant in a contemporary interior. But they’re often created using the techniques of artisans of another period.” This remains true for the Italian architect and designer’s newest collection and exhibition, Cocktail Hour, showing at his eponymous Mayfair, London atelier from through August 27. Set-up like a living space, the twenty new pieces shown pull from every cultural arena in history—1930s Italian shapes are outfitted in a soft palate pulled from Qing dynasty ceremonial dress. His rounded, plush Tato chair is lined in canary velvet with European Walnut and polished bronze, juxtaposed with other works, like 2013’s Sotirio burnished bronze and parchment table lamp with its organic silk lampshade, merging inspirations from both Asian and mid-century American design.

The Nerone parchment-lined walnut cocktail cabinet has an interior of black Sahara Noir marble to represent the black soul of the cruel, demigod Roman emperor it was named for. Finally killed by a stab wound to the heart, a red lacquer on the central handle stands out like blood from an uneasy wound in representation of his ultimate demise. The space-agey, egg-shaped Cosmedin hand-carved marble and aluminum side tables look transported from the future. Tying it all together, everything is set against a backdrop of 1960’s artwork by Enrico Castellani, Lucio Fontana, and Sergio Lomabardo, velvety carpets, and light blue or metallic walls.

Though ultimately modern pieces, Salvagni’s composition reinforces a true time-and-place-lessness that could set up an entire world inside 2,000 square feet.