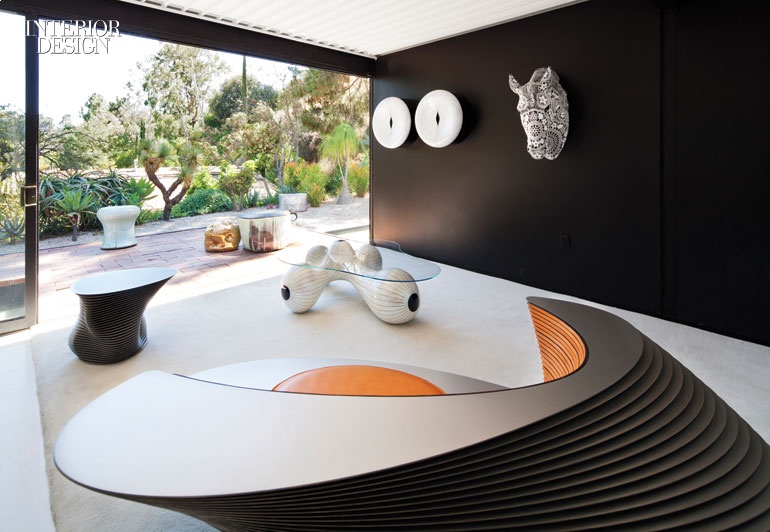 Southern California is filled with significant modernist houses: the work of the Austrian émigrés Rudolph Schindler and Richard Neutra; of architects enlisted by Arts & Architecture magazine to design Case Study Houses in the immediate postwar years, including Pierre Koenig and Eero Saarinen; and of later innovators such as John Lautner, known for his spaceshiplike buildings. Today, few of these Los Angeles residences serve their original function. Instead, they are open to the public in various guises.

That leaves the di­rectors to grapple with questions about maintaining and presenting the houses. Now that most are vacant, how can they be prevented from becoming empty shells? In the words of Sarah Lorenzen, the director of Neutra’s VDL Research House, “If a house isn’t going to be occupied by a family, it needs to be occupied by something else.” But what else? Each solution has pluses and minuses, and each has implications for the interior design that people see when they visit.

Directors of some of the best-known Southern California houses came together recently at a conference organized by the international Iconic Houses Network. Attendees exchanged ideas for keeping the properties afloat, financially and artistically. And the authors of Anarchist’s Guide to Historic House Museums, Franklin D. Vagnone and Deborah E. Ryan, gave a talk urging free experimentation with ways of engaging the public.

The location of Koenig’s Case Study House 21—a winding road in the Hollywood Hills—would make it difficult to operate as a museum. Luckily, a South Korean gallery, Seomi International, bought the house and uses it to display modern and contemporary furniture, ceramics, glassware, and lighting. “We’re stressing the idea of living with art,” Seomi managing partner Linus Adolfsson explains.

Because the house is staffed Monday through Friday, Adolfsson adds, “We can show it to anyone who wants to see it.” Neighbors have come to embrace the gallery in their midst. “People walk over with their friends,” he says. “They appreciate that we don’t charge admission.”

Koenig’s house, while experimental in terms of architecture, was conventional in being designed as a residence for one family. The Schindler House, on the other hand, was occupied by the Schindlers and a second couple, with a communal kitchen and living courtyards. After Pauline Schindler’s death, the nonprofit Friends of the Schindler House came to an agreement with Vienna’s Österreichisches Museum für Angewandte Kunst, known as the MAK, to run the house as the MAK Center for Art and Architecture.

MAK Center director Kimberli Meyer calls it “a setting for experimental practice” such as art exhibitions, operas, plays, and dance performances. “We will consider and try a wide range of projects, and we are not afraid to fail.” But anyone who would like to see the house as it was lived in—including students of interior design—is out of luck. The house is restored to its newly constructed state, all signs of later habitation removed. As Meyer explains, “It is consciously not a house museum, therefore very little furniture.”

The VDL Research House, named for philanthropist C.H. van der Leeuw, who lent Neutra the money to build it, was eventually left by his widow to the Cal Poly Pomona Foundation, to be managed by California State Polytechnic University’s College of Environmental Design, and currently serves mainly educational purposes. Students, for example, might be asked to document the architecture. The house has also been the site of art installations including Competing Utopias, a commentary on the Cold War in which the customary furniture, either original or reproduced, was replaced by pieces from East Germany.

“Our rule is that whatever we install must be site-specific and should acknowledge either the architect, the period that the house was built, and/or its spatial qualities,” Lorenzen says. She goes on to point out that being passed directly from the Neutras meant that it did not “suffer from remodeling.”

Literal signs of life are evident at a Lautner house with a vast roof that swoops down over a cantilevered pool terrace. The house has long been owned by playboy real-estate developer James Goldstein, who after Lautner’s death worked with one of his protégés, Duncan Nicholson of Nicholson Architects, to add several buildings. Now Goldstein, who is in his 70s, has promised it to the Los Angeles County Museum of Art with the stipulation that he is allowed to remain on the property for the rest of his life and even to continue making additions. At the same time, LACMA is already hosting events that engage the house as a work of art.

Four houses: one commercial gallery, two nonprofit institutions, one pledged to a museum but still lived in. Individual approaches with the same goal, to preserve important modernist architecture and turn what were once just private homes into places worth visiting. Together, the four are “at the cutting edge of ways to make these sites useful and relevant to today’s audience,” Anarchist’s Guide author Vagnone says, adding, “L.A. is definitely in the forefront.” As with so many things.