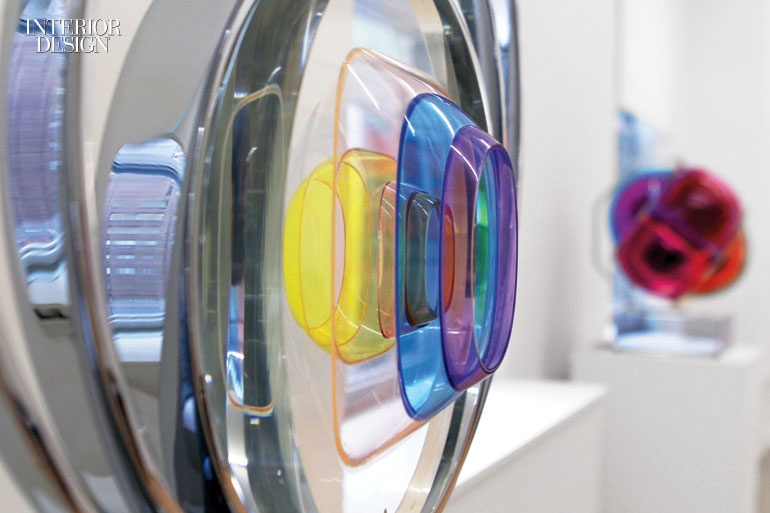 Kinetic and kaleidoscopic, the experimental work of a postwar Pittsburgh artist has come back down to earth. “Aaronel deRoy Gruber—Plexiglas Sculptures From the ’60’s and ’70’s,” organized with the help of the Irving and Aaronel deRoy Gruber Foundation and on view at the New York gallery 57W57Arts through June 9, features pieces in colored and colorless clear acrylic. They’re assembled in a setting as maverick as the work itself.

Because the proprietors of 57W57Arts are a psychiatrist, Dr. Alan Ravitz, and his wife, Sue, it shares an office suite with his practice. The gallery proper occupies three of its own spaces in addition to spilling into the waiting room. Exhibitions have included “Black and White,” which I curated.

Much of the suite is filled with a collection of modernist paintings, sculptures, and furnishings, colorful with a minimalist bent. For the Ravitzes, who began collecting Gruber’s work a few years ago, just before the gallery opened, this show is a way to explore the dialogue between art and industrial design. That’s clearly evident in one of the gallery spaces, where a Gruber sculpture on a pedestal meets bright red plastic-clad Softline shelving by Otto Zapf and an Italian 1970’s cube lamp in green and blue acrylic.

My own gallery, Weinberg Modern, has sold the occasional piece by Gruber. At 57W57Arts, a handful of the sculptures are for sale, and they range in size from about 8 inches square to 28 inches square. This is the first New York solo show of her work since the 1980’s. Before that, circa 1970, she was represented by the chic and prestigious Bertha Schaefer Gallery. (The Westmoreland Museum of American Art outside Pittsburgh presented “Aaronel deRoy Gruber: Art(ist) in Motion” in 2013, two years after her death.)

The 57W57Arts show focuses almost exclusively on Gruber’s colorful and lapidary sculptures, meticulously constructed from vacuum-formed acrylic. They are often self-illuminating, and about half revolve, powered by a motor in the base. Highlights include a large colorless revolving cube with her trademark rounded protrusions—a shape likened to early TV screens, camera lenses, or eyes—and a com­position of convex/concave multicolored triangles.

She was influenced, like everyone working in plastic in the 1960’s, by László Moholy-Nagy’s 1930’s experiments in the material, by his manipulation of viewer perceptions with changes of position and lighting conditions. The title alone of Gruber’s Revolving Eye suggests that her sculpture is an iteration of Moholy-Nagy’s vision-in-motion. Still, as one critic noted of her art, “It’s not like any plastic sculpture you have seen before. . . .”

This is the takeaway: Gruber may have come of age in the 1940’s, graduating from the Carnegie Institute of Technology, now Carnegie Mellon University, with a degree in costume economics, but it wasn’t until the 1960’s, after experiments with gestural painting, that she truly came into her own. Bending industrial materials to her will—first steel from Pittsburgh’s mills and then acrylic—she pushed her work onto the world stage.

She tracked global art movements through wide reading and frequent trips to New York, and she kept abreast of trends, too. A 1968 photo of her, simply but stylishly dressed and coiffed, standing in the middle of an installation of her work, shows a confident woman every bit attuned to the cultural moment. To reinforce this point, consider the much better-known Flyhead (Environment Transformer), Haus-Rucker-Co’s provocative helmet over headphones, intended to warp the wearer’s sense of reality, in juxtapostion with a similarly shaped sculpture by Gruber.

There is a vaguely utopian and psychedelic aspect to at least some of her work in acrylic. It engages, on a certain level, with the concerns, passions, and tumult of the time—as distinct from the more purely cerebral geometric constructions in plastic of notable contemporaries. She herself observed that “although the sculptures are minimal in concept, they are not empty.”

Often the slowly revolving elements reveal a celestial beauty, the harmonious order of the planets in orbit. Or perhaps a more terrestrial thing-in-becoming process is at work. In a catalog essay for 57W57Arts, Eric Himmel, editor in chief at the publishing house Abrams, wrote about curved surfaces arrested in the act of becoming geometric forms. Plugged in and turned on, with different colors and shapes in revolution, these sculptures are symbolic of a society that is in turmoil yet pushing toward something better. The title of the totemic Anamorphic Lens points to this aspiration.

By the mid-1980’s, she ceased producing works in acrylic—the result of the rising price of oil, hence plastics, as a consequence of the OPEC embargo followed by her own running out of gas. She re-created herself as a photographer. One set of black-and-white images, evocative and wistful, documents the decline of the steel industry in Pittsburgh and, simultaneously, the passing of the promise of the 1960’s. We now view the photos of Aaronel deRoy Gruber amid her acrylic sculptures—indeed, the sculptures themselves—with similar nostalgia.

> See more from the May 2016 issue of Interior Design