Fendi Transforms a 17th Century Palazzo into a Game-Changing Flagship 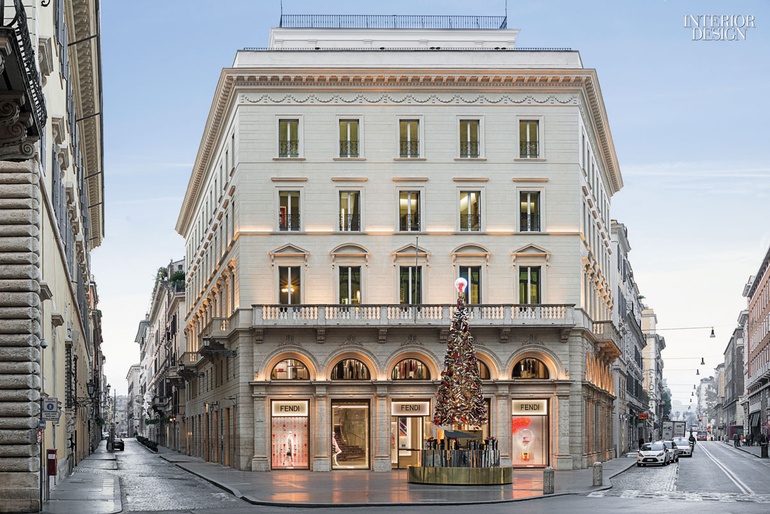 Whether it’s using the Great Wall of China as a catwalk or contributing 2.2 million euros to the restoration of the Trevi Fountain back home in Rome, luxury label Fendi continues to break barriers. And that’s in design of all kinds, not only clothing. Fendi’s latest fashion statement is the transformation of a 17th-century Roman palazzo near the Spanish Steps into a flagship combined with a VIP venue for fittings and fetes and a small five-star hotel. CEO Pietro Beccari describes Palazzo Fendi as “much more than a store—a game-changer.” Accomplished in less than a year, record time in the Eternal City, the palazzo’s reinvention came shortly after Fendi moved its headquarters to the Palazzo della Civiltà Italiana in the EUR district outside the city center. Otherwise known as the Square Colosseum, it was commissioned by Benito Mussolini for the 1942 World’s Fair but had recently sat empty. The facelifts of two such massive and, in their own ways, quintessentially Roman buildings display Fendi’s brilliance as a patron, selecting outside firms to infuse their distinct aesthetics with the label’s mix of quality, tradition, and zany experimentation.

When Beccari came aboard as CEO, he merged his energetic forces and passion for art and interiors with those of Silvia Venturini Fendi, who shares creative direction with Karl Lagerfeld. Fendi or Fendi Casa has recently participated in Milan’s Salone Internazionale del Mobile, Paris’s Maison & Objet, and Design Miami, bringing in the likes of DIMORESTUDIO, Estudio Campana, Maria Pergay, and Graf Paris to design the stands. “Our interpretation of interior design is closely linked to the maison’s DNA,” Beccari says. “We view each interior project we embark on as an opportunity to innovate, as we do with each new fashion collection.”

He considered Marco Costanzi Architects, which had handled the Square Colosseum headquarters as well as the Milan showroom, to be a natural fit to return for the palazzo’s hotel component, Fendi Private Suites. Marco Costanzi recalls meetings with Beccari as “volcanic” in terms of the CEO’s explosion of artistic ideas. Nevertheless, Costanzi’s brief for the hotel was simple. “Spaces were to feel familiar, even cozy, rich with Rome’s natural materials,” he says. The different colored marble blocks of the reception desk, the red marble in the bathrooms of the seven guest suites, and the travertine throughout recall St. Peter’s Basilica across the Tiber.

Lagerfeld’s black-and-white photographs of Rome are framed in clear acrylic. Beccari also saw the hotel as “a gallery for fashion objects,” Costanzi says. Hence the Baguette clutches retrieved from the archives and displayed in glass cases. Fur tablets are mounted in niches over the beds.

“Each designer we worked with at the palazzo was given creative control of his project but with a mind to Fendi’s universe—our heritage, history, and DNA,” Beccari says. “Inherent to each project are elements that remind us of Fendi’s Roman heritage, for example fur, saddle leather, geometries, color blocks, tones that recall the cityscape.”

The “Roman lounge” theme of the Design Miami stand by DIMORESTUDIO eventually became the inspiration for Palazzo Privé, the 2,100 square-foot level open only to VIPs. It’s reached via a glass elevator in the shape of a stile Liberty lipstick case, and visitors might feel they are entering a private apartment both hip and discerning, complete with restored herringbone parquet in dark-stained oak, walls paneled in sage-green painted boiserie or covered in deep blue silk, and eclectic vintage pieces combined with lighting and furniture from the Design Miami appearance. These objects, including the entry’s ceiling-mounted light installation, the open shelving that partitions the living area from the dining area, and the latter’s huge square table, were conceived by DIMORESTUDIO founders Britt Moran and Emiliano Salci with Fendi’s aesthetic specifically in mind.

After a pause, perhaps spent lounging on Palazzo Privé’s daybed in pale pink sheared mink, also a Design Miami piece, VIP customers can descend to the boutique. Beccari’s hiring of Curiosity president Gwenael Nicolas for the two-level, 9,000-square-foot space was a shoe-in after his completion of locations in Milan, Paris, and London. For the floor mosaics, Nicolas chose a very Roman splash of purple, red, and green marble, while bas-reliefs bulging from a travertine wall depict the Square Colosseum. The menswear section’s Hervé Van der Straeten pedestal table in stacked marble displays such unusual luxury goods as a soccer ball in two-tone leather with Fendi’s signature stitching. In a glass-fronted atelier, artisans craft vests in mink, fox, or sable.

As if all this weren’t enough, the building’s penthouse duplex now houses a Japanese restaurant and bar from the Zuma chain—the only interior not designed under Fendi’s patronage. (Studio Glitt led Zuma’s in-house team.) Fashionistas flocked to the March opening of this final Palazzo Fendi space, the icing on one of Rome’s most luxuriously layered cakes.