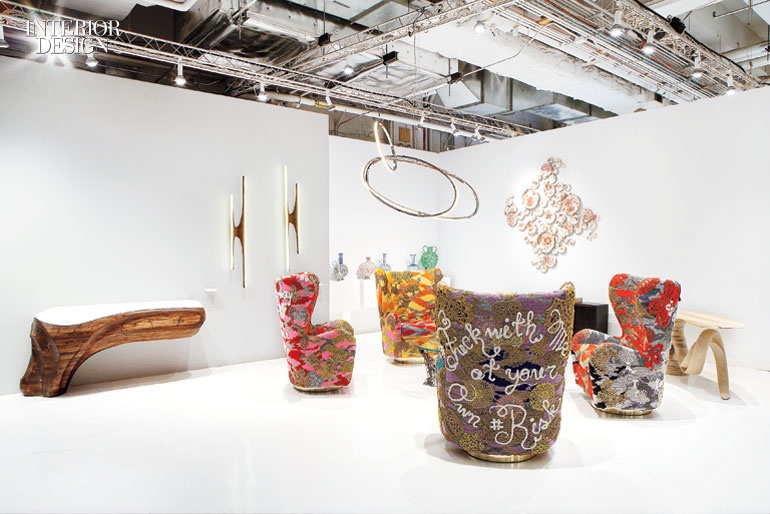 Many know Steven Learner as the founder of the three-year-old Collective Design fair. But his ah-ha moment for the show came during his former career as a Harvard University–trained architect and interior designer, when he repeatedly found himself purchasing pieces for New York clients from New York galleries—but in Basel, Switzerland.

Learner couldn’t fathom how one of the most important design cities in the world didn’t have its own important design fair. So, he created one. “This fair began because New York’s ecosystem demanded it: We have more architects and interior designers than any other city,” he explains. Showcasing 30-odd dealers of both vintage and contem­porary furnishings, Collective has become so successful that Learner has (happily) put most of his own design work on hold. Learner talks shop with design journalist Monica Khemsurov, who’s co-curating a mini-show of emerging talent for Collective’s fourth installment.

Monica Khemsurov: What makes Collective Design different from other fairs?

Steven Learner: The biggest complaint I hear is that fairs are redundant and they’ve been reduced to luxury shopping. It’s important to me that we maintain high and low price points, and that we have emerging galleries as well as established ones. Our goal is to make this fair accessible. At Collective, not every chair looks like a flying saucer, not everything is $80,000. Our viewpoint is very Bauhausian: Everyone should have beautifully designed objects, and they should be affordable. Yes, we show pieces that sell for upwards of $200,000, but we also show ones in the $300 to $800 range. For instance, last year Cody Hoyt’s vases at Patrick Parrish’s booth were $425. We’re trying to attract new design collectors and build the next generation. It’s spacious yet intimate environment where people can make considered choices.

MK: What’s in store for Collective this year?

SL: We’ll have another array of vintage to contemporary, jewelry to large installations, Mexico City to Copenhagen. Another thing that differentiates us is having new exhibitors, like Bryce Wolkowitz Gallery, who’s presenting work by Jim Campbell that toes the line between art and design.

MK: How do you cater to interior designers?

SL: A lot of custom commissions come out of the show, like ‘I love that 7-foot table, but I need an 8-foot version.’ Interior designers are enormous influencers; they’re showing clients what’s fresh and new, what they should be living with, and how to integrate it into a collection. Designers are adept at visualizing whether that Marc Newson Lockheed lounge will fit in a room or not. They also understand the intrinsic value of pieces.

MK: Are they shopping with decorating or collecting in mind?

SL: My gut is that, for the most part, designers are buying for use. These pieces are going into interiors within three to six months. Brian J. McCarthy bought a beautifully refined Guglielmo Ulrich desk from Nicholas Kilner last year. He Instagrammed the piece after installing it in a client’s house four months later, showing how a sculptural desk can become a functional object in the right hands.

MK: How open are they to taking risks on the contemporary works being shown?

SL: Interior designers have trained themselves to be current. They’re aware of the new design scene. Many of their clients are also art collectors, so there’s a high level of comfort with the new there—and an understanding that if you make the right choices, there’s the potential for appreciation in value. Even vintage dealers are out scouring the Italian hillsides looking for previously unknown work—a new discovery like the Gio Ponti–designed Parco dei Principi hotel in Sorrento, Italy, that they can buy lock, stock, and barrel.

MK: Are you seeing any trends emerge?

MK: How did your own firm come to do so many projects for art dealers and collectors?

SL: While at Harvard, I did a studio with Richard Gluckman that required designing a minimalist art museum. I already had a strong interest in minimalist sculpture, by artists like Dan Flavin and Donald Judd, so Richard and I really connected. When I came to New York in 1992, I worked for him for three years on 15 different gallery and museum projects, plus residential commissions that incorporated such works of art as a James Turrell skyspace over a client’s bed. I was also the project architect on Richard Serra’s house in Nova Scotia. When I launched my own firm in 1995, my work included homes for dealers like Sean Kelly and Dominique Lévy, plus a Connecticut property for collectors Melva Bucksbaum and Raymond J. Learsy with a 17,000-square-foot private art gallery.

MK: Did having so many art-world clients shape your design approach?

SL: My architecture is and always has been modern. But my earliest residential work with Gluckman was a little too austere for me. So in my own work I saw an opportunity to create a tension between minimal architecture and warmer interiors. I’ve always been interested in that tension, and the eclectic approach of mixing vintage and contemporary. It also allows clients to keep adding to their collections. I never wanted to create a set piece where the homeowners had to call me if they were about to buy something new or move a chair. Now, at Collective, I’m juxtaposing galleries, creating a similarly curated mix.

MK: Collective does seems to embody an eclectic approach to collecting.

SL: I think a big change in decorating has been the absence of an overarching style. No one does a French Empire room anymore. Interior designers want works from many geographic areas and periods of time, as well as a mix of collectible, functional, and decorative pieces—plus objects that might be sculpture but are couched as furniture.

MK: What’s the status of your own practice? I noticed your studio website redirects to Collective’s.

SL: My design work is on a consultant basis now, for certain people bringing especially interesting projects to me. For more than 20 years, I ran my own design firm. It grew larger as the work necessitated, and eventually I wasn’t as creatively involved as I wanted to be. These days, the projects I’m involved in are few and far between, but they’re really juicy. In many ways, Collective is a full-time job, but it’s also a labor of love.