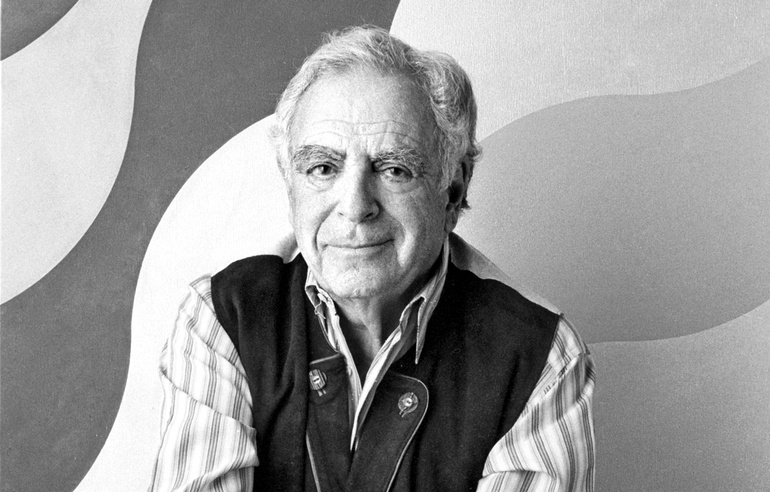 American furniture designer and Interior Design Hall-of-Famer Vladimir Kagan, an early pioneer of modern design, has died. He was 88.

Born in Worms on the Rhine, Germany in 1927, Kagan became interested in painting and sculpture during his childhood, later developing an affinity for architecture and design in his formative years. After graduating from Columbia University in 1947, where he studied architecture, Kagan joined forces with his father, Illi Kagan, to master cabinetmaking and woodworking. It was this experience that sparked a true passion where he then dedicated himself to mastering furniture craftsmanship from the ground up.

Affectionately nicknamed “Vladi,” Kagan was instrumental in streamlining modern design by introducing sensuous furniture with more compact footprints. Lamenting observations of friends sitting on sofas “like sparrows on a telephone line,” Kagan morphed these linear forms into free-form designs, delivering spatial possibilities more conducive to comfortable social interaction. His collector friends were also pleased—their monumental canvases had shifted furnishings away from walls, so Kagan’s pieces proved ideal for rooms displaying art. One mammoth free-form sofa he designed for a Massachusetts house by Walter Gropius required being hoisted up and through the living area’s window—a reality he relived when SPAN Architecture gut renovated an Upper East Side duplex with two of his swooping sofas in 2015.

Permeating Kagan’s unique approach to design was a steadfast commitment to simple elegance and comfort–comfort being the crucial. Influenced by the Bauhaus philosophy that form follows function, he remained adamant that a seat that lacks great comfort, lacks true function. Additionally, he stayed true to “less is more”—as he consolidated what would normally be three pieces into one all-encompassing curvilinear sofa, he infused formerly crowded spaces with new life and allowed interiors to breathe.

Kagan’s design ingenuity yielded numerous classics, now coveted by collectors for their originality and fine craftsmanship. Throughout his enormously successful career that spanned over six decades, connoisseurs, museums, and other artistic luminaries avidly sought his work—his prize-winning designs grace the permanent collections of the V&A London, the Vitra Design Museum, and the Die Neue Sammlung in Germany. His notable celebrity clients include Marilyn Monroe, Gary Cooper, and Walt Disney. Ralph Pucci International had represented Kagan since 2002.

Over the years, Kagan’s standout pieces were featured in numerous projects worldwide. Interior Design was honored to induct Kagan into our Hall of Fame in 2009. Revisit our celebration of the esteemed designer in the video below.