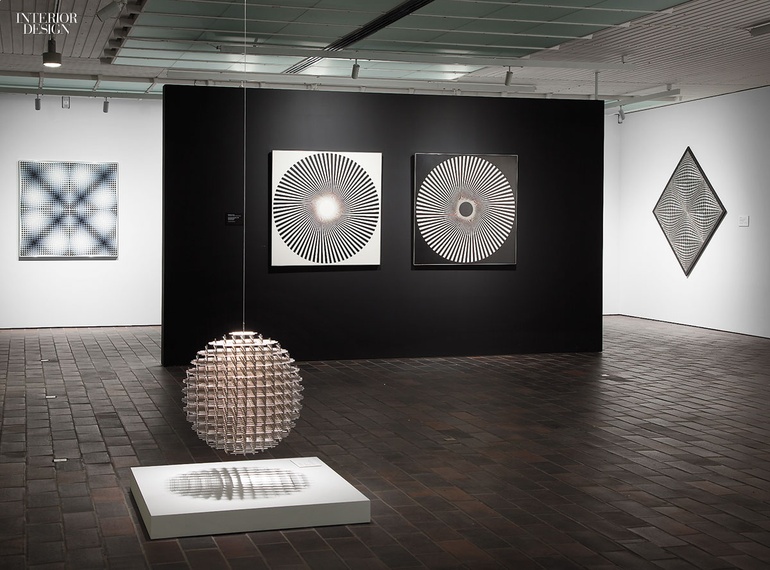 Though the optical and kinetic art movements dominated the 1960s and left a lasting influence, no museum in Scandinavia has covered it in the last half-century. That changes with “Eye Attack: Op Art and Kinetic Art 1950-1970” at the Louisiana Museum of Modern Art in Humlebæk, Denmark, now through June 5th.

With inspiration rooted in an industrial, illusionist, and technologically-based point of view, artists of the era aimed to play with the observer and cause them to be actively involved in the art; optical is abstract and constructivist, and kinetic intends to capture and cultivate motion. To help visitors better understand the development of this genre, curators have arranged the exhibit as sort of a timeline; starting with a series of black-and-white paintings and experiments in color, like Wojciech Fangor’s hazy Untitled No.32, visitors will move through large spatial installations, including a wall with flickering color pixels and a neon-lit glass hall, by François Morellet and Carlos Cruz-Diez, respectively. Co-curator Tine Colstrup says, “In contemporary art we see many different traces of historical op and kinetic art. As a museum dealing with modernism and contemporary art alike, we found it interesting and relevant to present some of the movement’s own less familiar roots.” 100 works by 40 international artists will be included, among them “father” of optical art, Victor Vasarely, as well as Bridget Riley, Julio Le Parc, and Gianni Colombo.

Accompanying the exhibit is an illustrated catalog, “Louisiana Revy”, available in Danish and English. To further expand a reader’s understanding of the history of this style, the catalog includes an introduction by Colstrup, articles on the its culture and the way it manipulates perception, as well as interviews with six of the artists featured.