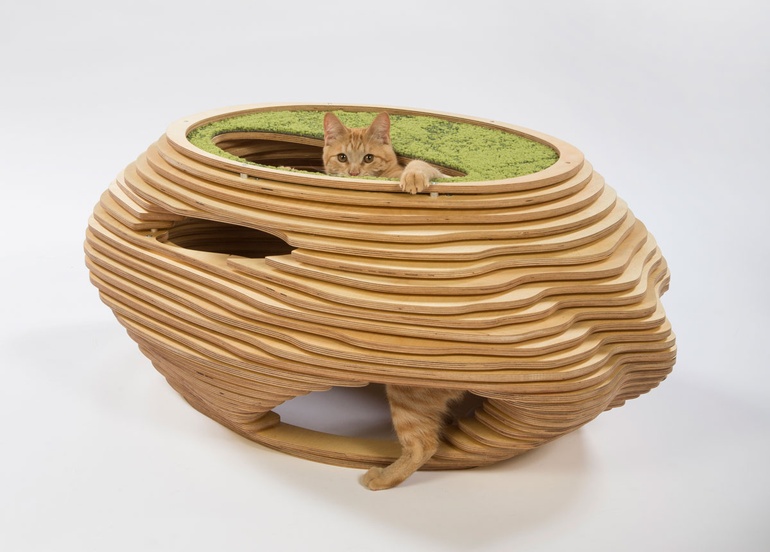 Normally architects and designers have humans in mind when they design houses and other buildings but for one evening earlier this month, cats were their focus.

A sold-out crowd gathered at the Herman Miller showroom in Los Angeles for the second annual “Giving Shelter” benefit for FixNation, a California-based nonprofit that provides free spay and neuter services for stray cats in the area. The event included the display of a dozen cat shelters built by local architects. One design in particular that was the cat’s meow was the “Cat in a Fish Bowl” by Abramson Teiger Architects. Teiger’s design, which incorporated European plywood and carpeting from FLOR, resembled a fish bowl.

“I’ve always wanted to create a cathouse that really works,” says Douglas Teiger, AIA, managing principal at Abramson Teiger Architects. “Most are gigantic and impractical. For this project I was inspired by the symbol for yin-yang, which is made up of two fish, and represents the dichotomy between opposite energies and how they are connected and interdependent, just like a cat and a fish. I also wanted to make a piece that’s multifunctional and could be used as a side table.”

During the event, attendees voted for Teiger’s cathouse as the Fan Favorite.

“All of the submissions were unique and beautiful, but his had an organic feel that guests were really drawn to,” says Leslie Farrell, founder of Architects for Animals and the event’s organizer. “Especially the piece’s undulating curves and the way the light caught it almost like latticework.”

In addition, a number of celebrities designed custom-made cat bowls for the event, which were later auctioned off on eBay with the cathouses. Proceeds went to FixNation.

Architects for Animals - Cat-à-Tête from Stephen Schauer on Vimeo.