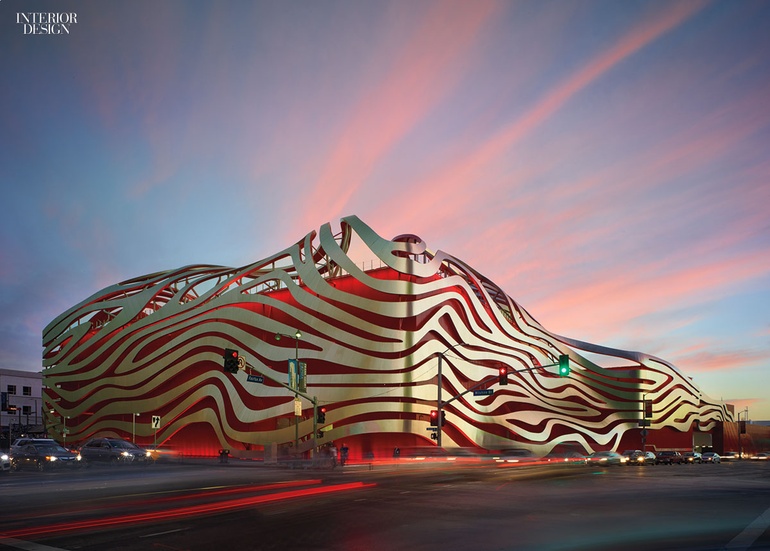 Located on “Museum Row” of the famed “Miracle Mile”, the new Petersen Museum, which showcases the art, experience, culture and heritage of the automobile, is a complete exterior transformation and dynamic interior redesign, a major step towards the museum’s goal of rebranding for a more highbrow image. KPF’s new design transforms the Petersen building into one of the most significant and unforgettable structures in Los Angeles.

Unlike most museum renovations, which involve a complete building teardown, this is a repositioning project. To use the metaphor of a car, if the existing building is a car’s chassis, KPF’s design is the body. The bones of the structure remain, and the existing concrete portico on Wilshire is removed. The rooftop becomes converted into a party space which can be rented out. A corrugated aluminum rain screen outboard wraps around the building on each of the three street frontages, giving the museum an entirely new look and feel. “Ribbons” made out of angel hair stainless steel on the front and top, and red painted aluminum on the back and bottom, flow and wrap the building, maneuvering the existing entry vestibule and other apertures. Sitting atop the existing structural system like the body of a car mounted to its frame, the steel “ribbons” evoke a sense of speed and movement and are brushed to avoid creation of glare. At night, the color and forms will be lit from within to accentuate the steel sculpture and act as a beacon on The Miracle Mile.