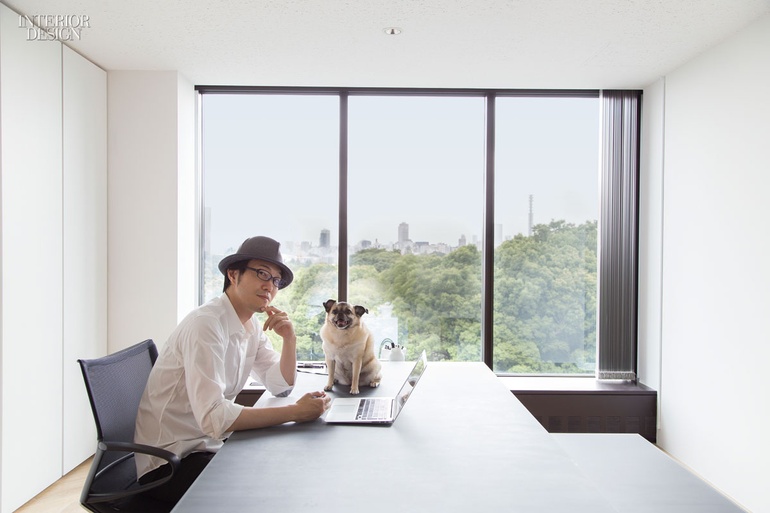 The busiest man in design? Oki Sato just might be it. Since the Toronto-born designer founded his Tokyo studio, Nendo, he has collaborated not only with furniture and lighting manufacturers but also with brands from Tod’s luxury leather goods to Häagen-Dazs ice cream—forging a reputation for witty ideas that resonate emotionally.

“Most people think of Japanese design as simple and functional, but it’s important to find the story behind an object,” he says. “Coming up with ideas is like breathing or eating. It relaxes me. We’re working on about 400 different projects at the same time.” Numerous books have already been written about his prolific output. In 2015, he was named designer of the year at the Maison & Objet trade show in Paris.

As a result, the firm’s 30-person staff had to find more space. “Our old office was spread over three floors, but I thought that consolidating into two would make communication easier,” he adds. The new studio is 4,700 square feet in a glass tower with an impressive pedigree: completed in 1977 by Pritzker Architecture Prize winner Kenzo Tange for the influential Sogetsu School of ikebana floral arrangement. Sato favors minimal furnishings and avoids clutter, but the one thing he couldn’t do without is a 3-D printer, allowing him to look at a prototype from all angles. His desk is, naturally, a Nendo design, a table manufactured by Glas Italia. He likes to keep the top as tidy as possible, with nothing more on it than a laptop, a pen, paper, and occasionally his Chihuahua-pug mix, Kinako.