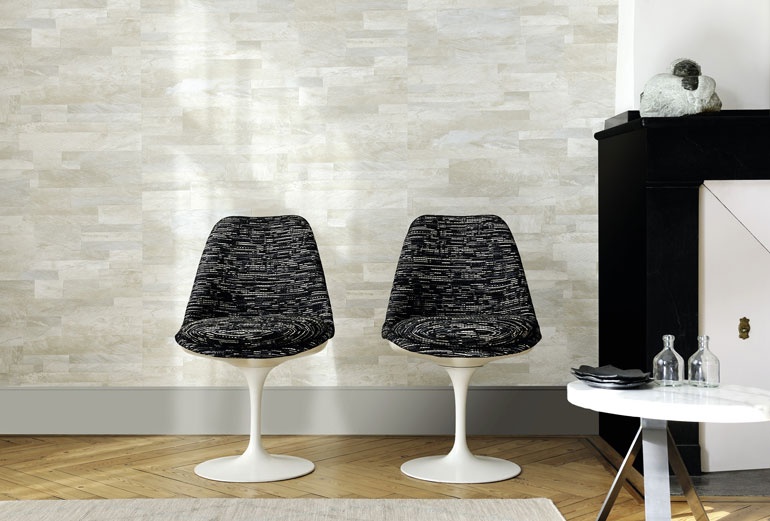 The 7th edition of the annual Paris Deco Off exhibition did not disappoint. This year saw a record 106 showrooms and galleries take part in this growing parallel show to the January edition of Paris Maison & Objet. The annual five-day showcase saw designers, buyers, and international press descend to view the latest new releases in textiles, trimmings, lighting as well as paint, floor and wallcoverings.

Pop-up galleries displayed experimental installations showcasing the latest fabric releases: MissPrint created the ultimate paper trail to its gallery through the use of origami; Spanish-based Gaston y Daniela produced an ornate canopied entry extending onto the pavement that both welcomed and surprised. The already vibrant atmosphere was enhanced by a Masters of Linen installation that firmly established Paris Deco Off within the deco district. The European Confederation of spinners, weavers and knitters provided 140 oversized lamps—adorned by each fabric house—to illuminate participating showrooms along the streets of the Rive Droite and Rive Gauche. As if the lamps were not enough, red carpets even provided the final few steps of direction.

There was also a variety of cultural events to be enjoyed including the “Faire le Mur” (If Walls Could Talk) exhibition at the Musee des Arts Decoratifs, tracing four centuries of paper painting techniques and developments. In an adjoining gallery there was the delightful “Tissus Inspirés. Pierre Frey,” a presentation of fabrics and wallpapers by the French fabric house covering 80 years of interior fashions. This show exhibits until June 12 at Les Arts Décoratifs. In the showroom of Declercq Passementiers there were demonstrations of loom weaving, techniques that had been passed down through seven generations. In Place Furstenberg in the Sixieme Arrondissement, artisans demonstrated their skills while seated within clear acrylic cubes so that cratsmanship such as decorative plasterwork could be viewed in action and from all sides.

There were so many new product launches to meet the needs of every type of interior designer from contemporary, avant-garde to traditional. Just as fabrics, wallcoverings and accessories were still festooned with trees and leaves and often with birds in hot tropical colors, the show also saw a move towards materials that camouflaged their origins: wallpaper masquerading as marble in Coordoone or as wood at Elitis, leather that at first glance was metal by Moore & Giles. At Jean Paul Gaultier for Lelievre the illusion continued as oxidized metals revealed they were faux suede.

The two standout palettes were in the teal blue and plaster pink spectrums, seen in practically every showroom. Nobilis, Osborne and Little, and Larsen had plenty of teal accents and C&C Milano, De La Cuona and Arte showed layers of rose and plaster pink hues. Additionally, Dedar, Elitis, and Lelievre showed updated tweeds and bouclé’s in palette pleasing colors, many incorporating metallic threads.

As an alternative to the big statement greenery, a burgeoning movement of abstract and geometric patterns influenced by artistic movements of the early 20th century was seen at Osborne and Little. And Pierre Frey was certainly creating a buzz through its contemporary twist on Art Deco. While foliage isn’t quite a mainstay yet it’s inclusion yet again this year indicates that it still has plenty of staying power!